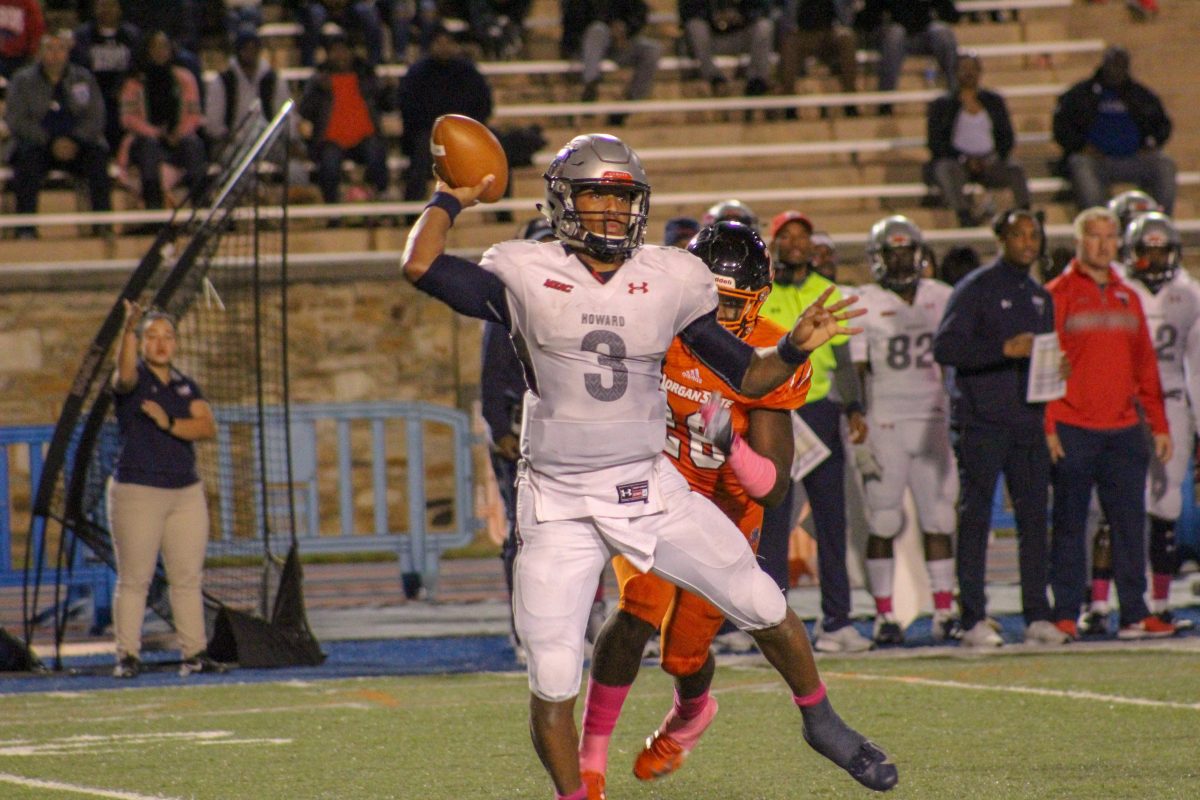 HU’s win seemed to be normal and expected but what was not expected was the play of Caylin Newton.

BALTIMORE–The Battle of the Beltway took a Black College Football twist as Morgan State hosted Howard in an under the lights battle on Saturday night. Both teams played close but Howard took the win, 35-26.

Don’t let the nine-point win fool you, Morgan State came ready to play. It was shown on the first play of the game. Jordan Cofield took the opening kickoff 75 yards, deep into Howard territory. The Bears added an FG by the end of their drive. A few minutes later, DeAndre Harris threw a 12-yard pass for a TD.

With MSU up 10-0, here’s when things got crazy during the first half. Jayson Robinson laid a vicious hit to DeAndre Harris and he fumbled. The Bison turned that turnover into a touchdown. During the FG attempt, Colby Warrior blocked the kick and almost took it back to the house.

On the next drive for MSU, William King fumbled. HU failed to capitalize but got the ball back again, and then, Caylin Newton was intercepted by a defensive lineman. Antoine McCray made all defensive linemen proud with a leaping INT as the ball was tipped at the line of scrimmage. On the next drive, Andre Harris was picked off by Byran Cook. His 41-yard return added 6 points for Howard. But once again, the kick was blocked. After that, Ricquaz Brannon and Joshua Chase both added rushing touchdowns for both sides.

After the dust and crazy plays settled, Howard was up on MSU by a score of 20-19 at halftime.

In the second half, the defenses showed up and took over. DeAndre Harris scored the only touchdown of the third quarter. The Bears offense looked to put away the Bison after a Joshua Chase run in the fourth quarter. But the Bison defense caused Chase to fumble as he entered the end zone. The touchback took the air out of Hughes stadium as Howard rallied to score 15 unanswered points in the fourth.

HU’s win seemed to be normal and expected but what was not expected was the play of Caylin Newton.

Newton went 14 for 32 with 213 passing yards. He gained 39 yards rushing but lost 44 yards. He was sacked six times and threw two interceptions. Like Lamar Raynard, the Morgan State defense grounded the impact of a star quarterback. Statistically, it was the worst game against MEAC competition that Newton has played. He will be looking to recover next week against a tough South Carolina State defense. That game will be a warm-up for their clash with FAMU.

Speaking of FAMU, MSU will be facing FAMU and Ryan Stanley. The Bears will be looking to play tough against another star QB but with a win this time around.