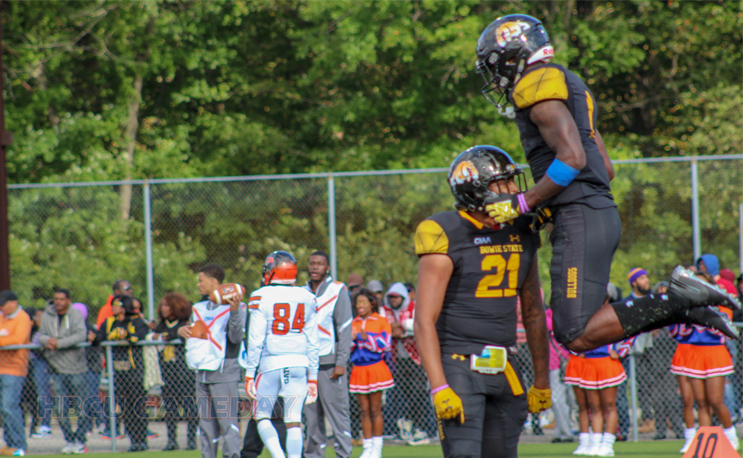 It wasn’t a shootout like in years past, but Bowie State managed to hold off Virginia State in a critical CIAA North matchup.

The game was defensive throughout with a total of seven scoring plays and two touchdowns from each team. The first quarter was quiet for both teams until a Bowie field goal with a little over two minutes remaining, closing out the quarter ahead of Virginia State 3-0. BSU’s defense did not allow any points in the first quarter. In the second quarter, A high snap that got away from the punter rolled out of BSU’s own end zone for a VSU safety to cut the lead to 3-2 with 12:49 remaining in the first half.  The next score did not come until just under ten minutes later with another BSU field goal, extending the lead to 6-2 going into halftime.

Red zone trips finally turned into touchdowns for both teams in the third. Bowie opened up the second half with an 11-play 68-yard drive concluded by a three-yard touchdown catch from Amir Hall to redshirt sophomore receiver Montez Clay. The successful extra point extended the Bulldogs’ lead to 13-2 with 10:11 remaining in the third quarter. The Trojans drove down 52 yards down the field and managed to get to the Bulldogs’ 27-yard line but a costly fumble gave the ball back.

Hall drove BSU downfield again with six plays for 73 yards and a 22-yard touchdown reception for Clay, making it a 20-7 margin with 5:11 remaining in the third. VSU responded with a nine-play, 60-yard scoring drive executed by an 11-yard dash in the end zone from junior quarterback Cordelral Cook to cut the trail to 20-9 after the successful extra point.

The fourth quarter was full of turnovers on downs from both BSU and VSU respectively until a late effort from VSU ignited. A deep pass from Cook set VSU up on BSU’s one-yard line with just over three minutes remaining in regulation. Running back Daniel Reid got into the end zone for a BSU touchdown, but a failed two-point conversion kept the gap at five points for the final score of 20-15.

Cook finished 16 of 28 with 215 yards and an interception for VSU. He also led in rushing with a net of 83 yards and a rushing touchdown. Senior wideout Joshua Harris led in receptions with six catches for 79 yards.