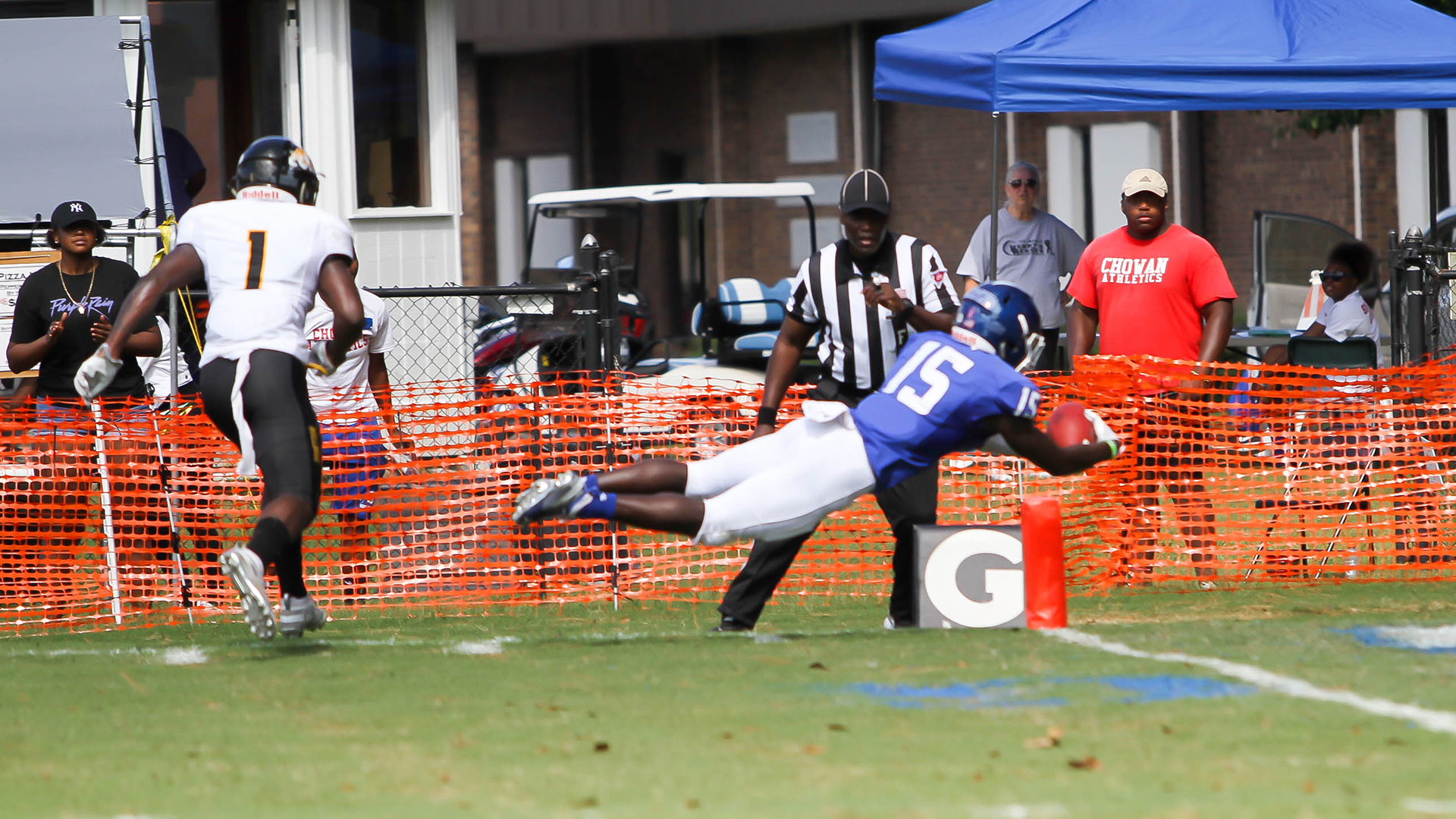 The Hawks set the tone on the opening play of the game with an interception returned 36 yards for a touchdown by redshirt senior linebacker Jacquae Peart. The successful extra point put them up 7-0 with just 15 seconds off the clock. BSU drove down the field with the help of an 81-yard bomb thrown by senior quarterback Amir Hall but was stopped in the red zone and held to three points in response.

FB 4Q | You read the score right. Chowan has dominated from the first play from scrimmage.

A game of back-and-forth ensued as Chowan drove down the field on its next possession and scored increasing the lead to 14-3. Bowie responded with a seven play, 63-yard drive that resulted in a touchdown, making the deficit a manageable 14-10. On the Bulldogs’ next possession, however, Hall was picked off again and the Hawks were set up in great field position. A 23-yard takeoff from sophomore wide receiver Imeek Watkins got Chowan back in the end zone and increased the lead to 21-10 with 2:14 remaining in the first quarter. Hall got BSU down the field a 53-yard pass to set up a touchdown reception from redshirt sophomore receiver Montez Clay to get Bowie within five, now trailing Chowan 21-16 at the end of the first quarter.

The second quarter was much calmer, as there was only one scoring drive.  Sophomore quarterback Bryce Witt, with the help of great protection from the line, sat in the pocket and delivered a 43-yard pass to Watkins to drive Chowan into BSU territory. An 11-yard touchdown dash from redshirt junior running back Tyrell Freeman increased the lead to 28-16. After a blocked field goal attempt, BSU went into halftime down two scores.

The third quarter stalled for both teams as neither found the end zone. A potential scoring drive for BSU was deflated by a too-high snap, leading to a missed field goal.

Chowan reignited in the opening drive of the fourth quarter with a 13-play, 79-yard scoring drive. Witt and redshirt senior receiver Paul Gooden connected on a nine-yard pass in the end zone, increasing the lead to 35-16. Gooden and Witt found each other in the end zone again for a short touchdown reception to put the nail in the coffin at 42-16 with 5:34 remaining in regulation.

Bowie found the end zone for the first time since the first quarter with a 2-yard pass from Hall to redshirt junior Brandon Abrams with 4:12 remaining in regulation, setting the final score at 42-23.

FB FINAL | Chowan picks up their first ever home win over Bowie State with a dominating 42-23 win.