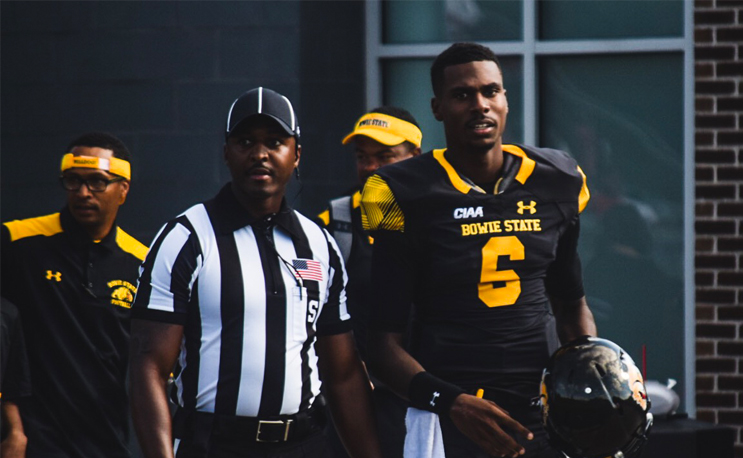 Bowie State’s Amir Hall saved his best for last, leading his team to a comeback victory over WSSU.

The great ones always find a way to get it done, and Amir Hall proved his greatness on Saturday night. After a lack-luster three-and-a-half quarters, the Bowie State quarterback willed his team to a 20-17 win over Winston-Salem State in its home opener.

Hall hit senior receiver Lansana Sesay for a 39-yard touchdown with 1:15 remaining to give BSU its first lead of the game, capping a seven play, 70-yard drive. It completed the two-point conversion and then kept WSSU off the scoreboard for the win.

The Surgeon slices up the Rams for a go-ahead score to Lansana Sesay. Bowie up 20-17 with 1:24 left in the fourth. Rams ball. pic.twitter.com/5ObzretjWf

WSSU led most of the game, getting an early boost from a blocked punt, Kerrion Moore would score with 6:20 left in the first quarter to put his team up 7-0.

The Ram defense did a solid job in the first half, holding Hall and Co. to just one field goal. The Bulldogs would get two additional points on a safety and head into halftime down 7-5.

Both offenses scored on their opening drives, the Rams with an eight-yard pass from Emeire Scaife to Darren Dowdell to go up 14-5 and the Bulldogs with a two-yard run by Brandon Abrams to cut the lead to 14-12.

Moore finished with a game-high 85 yards for WSSU, who fell to 1-3.