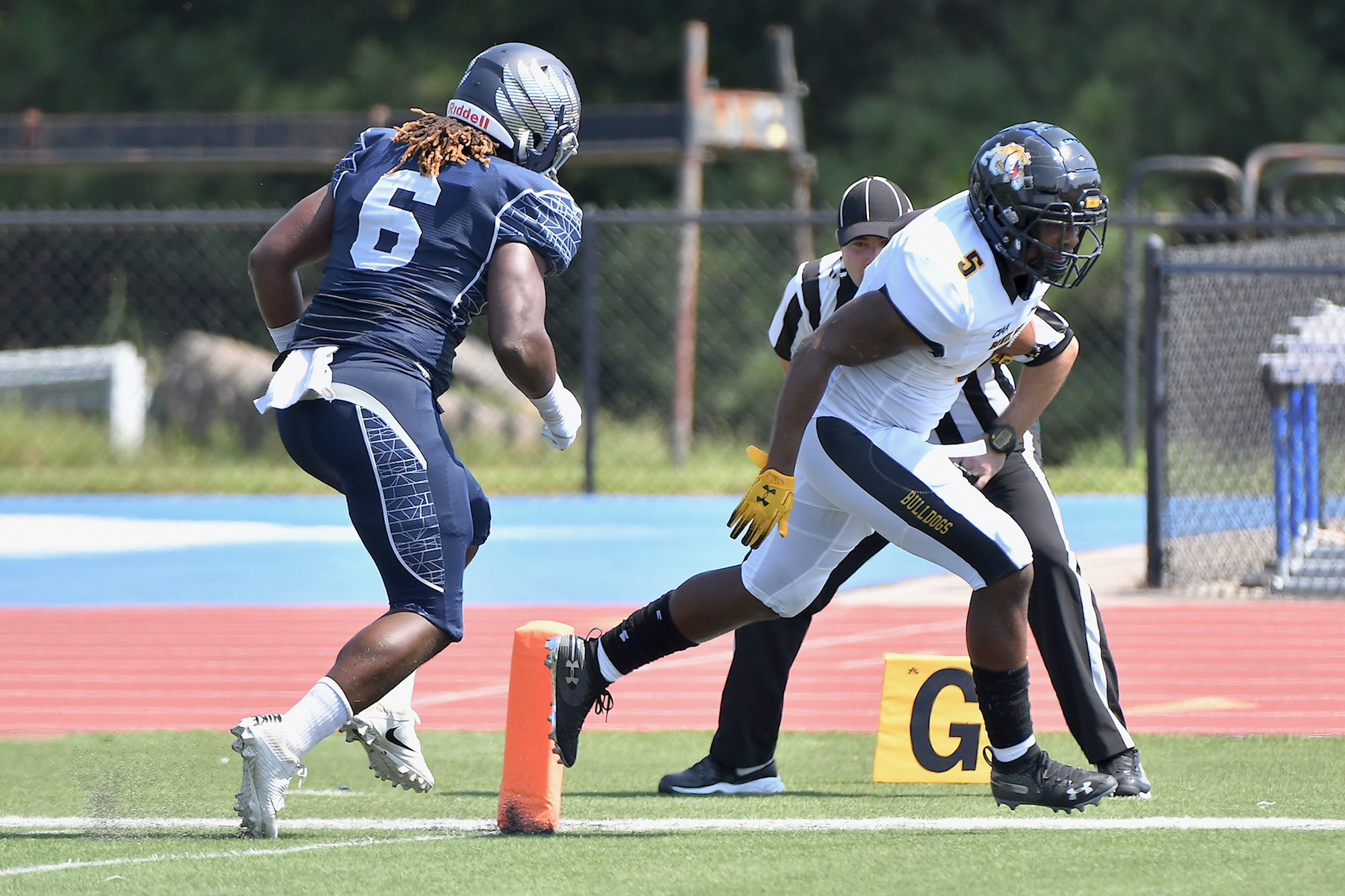 Conference play in the CIAA begins with a Bulldog road win.

Freshman QB John Darby IV and Saint Augustine’s returned fire with a 45-yard pass completion to redshirt senior WR Sean Smith for a touchdown, taking the 7-6 lead after securing the extra point. These two explosive plays were all of the action for the first quarter.

In the second quarter, the Bulldogs got the fireworks going as they rallied early, scoring on a 47-yard pass to redshirt senior wideout Gilbert Lunsford with 12:45 remaining.

Under two minutes and an SAU three-and-out later, Bowie’s junior DB William Flowers ran a punt return 50 yards to the house for another touchdown. The Bulldogs went on to score three unanswered touchdowns throughout the quarter after Hall connected with junior redshirt wideout Montez Clay in the end zone for 21 yards with just over three minutes remaining in the second quarter. Bowie went into the half up over the Falcons 26-6.

The game settled back down in the third quarter as the only points came from the Bulldogs capitalizing off an SAU offensive fourth down mishap, putting Bowie ahead 32-7. However, momentum swiftly shifted in favor of Saint Augustine’s when the game began to wind down. A big step up from Saint Augustine’s defense aided in Bowie turning the ball over three times late in the fourth quarter.

That’s three. All in the fourth quarter. https://t.co/prjBe3P1xr

With just under seven minutes remaining, Falcons’ sophomore DL Tyler Trexler forced a fumble on Hall that Saint Augustine’s recovered. After marching down the field junior RB Jeremiah Miller ran it in from one yard, cutting the lead to 32-14. Now back on offense, Hall threw an interception to sophomore DB Sidney Lawson on his second pass attempt with just over three minutes remaining in regulation. Lawson returned the interception 44 yards to Bowie’s four-yard line, giving the Falcons perfect scoring position to capitalize on another slip-up. Darby IV ran it in from nine yards and scored on a quarterback-keeper after the successful two-point conversion, SAU scored 15 unanswered and got the deficit down to ten points. Though Bowie did cough up the ball once more with just over one minute remaining, Saint Augustine’s gave it right back on its possession with a mutual fumble. The game ended 32-22, with the win going to Bowie.

Bowie controlled the game through the air, finishing with 342 net passing yards and three touchdowns. Hall finished 28-42 with three touchdowns and an interception. Lunsford finished with eight receptions for 125 yards and a touchdown. The run game was not utilized much this week. Alternatively, Saint Augustine’s was contained through the air, finishing with under 100 net passing yards. Darby IV went eight of 16 for 82 yards, one touchdown, and an interception. Miller led in rushing with 101 yards and a touchdown on 23 carries.