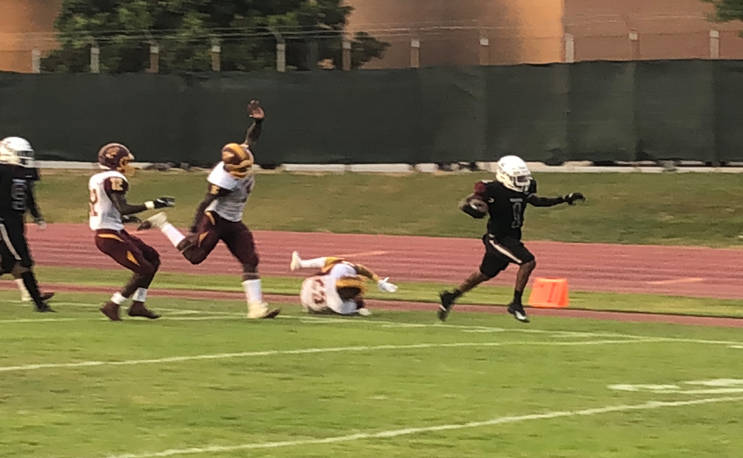 Morehouse clicked on all cylinders in a blowout win over Central State, 41-14 in the Maroon Tigers home opener.

Morehouse’s offense has been clicking on all cylinders this season, and that continued on Saturday.

It came away with a blowout win over Central State, winning its home opener 41-14. Morehouse is now 3-0 on the season.

But after that, the Maroon Tigers upped their game and went to work on Central State.

Morehouse put up 31 unanswered points after CSU’s first touchdown drive in the 1st Quarter. The Maroon Tigers were lighting up the scoreboard while Central State was lighting up the turnover side of the stat sheet.

Despite going 16 for 29 with 291 yards and one touchdown; CSU QB Trent Mays threw three interceptions in the contest. After two of those interceptions, Morehouse scored on their following possessions. Mandrick Ray picked off Mays twice and Detrick Vanover grabbed one pick as well.

As the Maroon Tiger defense was putting in work, so was the offense. Quarterback Michael Sims threw for 227 yards while competing for 23 out of his 36 passes. He added one more TD in the air and ground respectively. Santo Dunn also added two TD’s on the ground.

The Beast in the East might be @MorehouseFB they lead @GO_MARAUDERS 31-7 late in the 3Q. pic.twitter.com/x1BsUrtoyP

Overall, Morehouse was effective on every side of the ball. They will be looking to keep that same consistency as they face Miles in the Chicago Football Classic this week. The Maroon Tigers defeated Miles last year by only three points. Although Miles is currently 0-3, they always play Morehouse very tough.