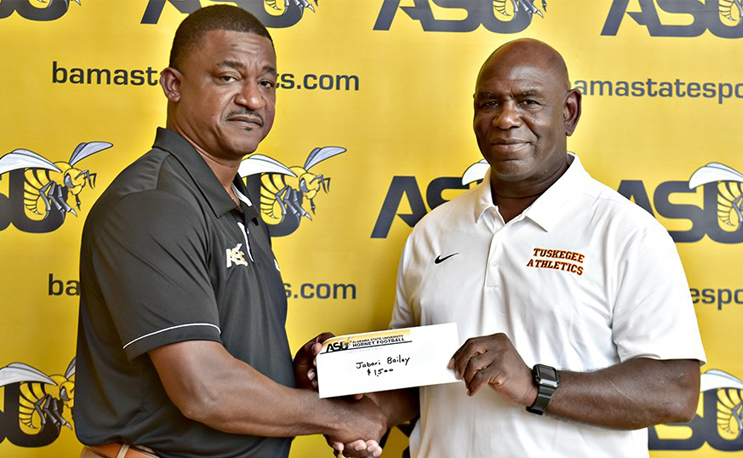 Alabama State and Tuskegee are fierce rivals, but that didn’t stop ASU from helping out a Golden Tiger in need.

MONTGOMERY, Ala. | Alabama State and Tuskegee put their football rivalry aside Friday, the opening day of camp for the Hornets, as head coach Donald Hill-Eley and Tuskegee head coach Willie Slater met in Montgomery.

Eley presented the Golden Tigers $1,500 raised by the program and the Heritage Barber Shop this week to go towards the fund for injured Tuskegee linebacker Jabari Bailey. On July 11, Memphis-area news outlets reported that Bailey, who was scheduled to join the Golden Tigers football team for football camp this summer, sustained a career-ending injury. His “Good Samaritan” act of helping a friend whose car left him stranded on the side of the road resulted in Bailey being struck by another car. The impact of the crash pinned Bailey between the two cars, instantly severing one of his legs.

NCAA rules permit Tuskegee to pay directly for Jabari’s actual and necessary expenses related to him and his family. This GoFundMe account extends beyond that scope of covering rehabilitation and any other related expenses. The GoFundMe effort is in compliance with NCAA rules and allows all fans, donors and supporters to contribute to these particular expenses.

“We are going to compete with them. We are going to play them hard just like any other game, but when it comes to one of our guys that is down, whether it Alabama State or Tuskegee we are going to support our kids,” Eley explained. “My heart just goes out to that program and the family.”

Alabama State opens the season at home against Tuskegee September 1 in the Labor Day Classic, with kick set for 5 pm. Season tickets and single game tickets are now sale for the 2018 season. The Hornets play four home games during the campaign with Jackson State, Texas Southern and Mississippi Valley State joining Tuskegee. Several options are available for fans this season, including a Young Alumni package and group rates. For more information, call (334) 229-4551 or visit BamaStateSports.com.