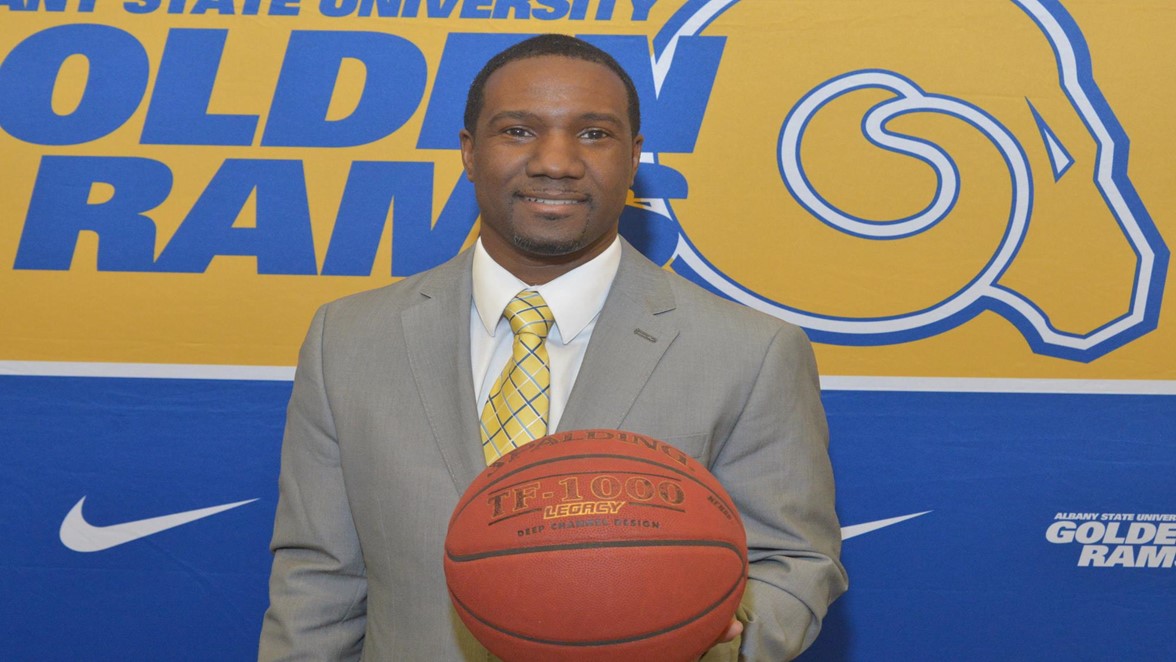 Patrick Gayle chosen from over 100 applicants.

ALBANY, GA–Albany State University (ASU) announced at a press conference on Tuesday that Patrick Gayle has been named the head men’s basketball coach. Gayle is a coaching veteran that brings over a decade of experience as both a head and assistant coach at the NAIA and high school levels.

Gayle was selected from a pool of over 100 applicants and after a national search and was chosen as the seventh men’s basketball coach in ASU history. He is set to begin his duties immediately.

“We are excited to announce Patrick Gayle as our head men’s basketball coach at the Albany State University,” said Athletics Director Sherie Gordon. “Coach Gayle is a high-energy leader committed to being a part of our university and the city of Albany. He has a tremendous basketball pedigree and a strong track record of recruiting, developing and mentoring high-quality student-athletes. He has a relentless work ethic, passion for the game and a clear vision of how to build a program that is capable of competing at the highest levels in the conference and region.  I look forward to our student-athletes, fans, donors, and alumni getting to know Coach Gayle and his family.”

“We are happy to welcome Coach Gayle to Albany State University”, says Interim President Marion Fedrick. “Through hard work and a strong commitment to excellence, our program will continue to improve, and we are confident that his expertise will take our basketball program to new heights.”

“My family and I are excited to be a part of the Albany State University family and community and we look forward to working closely with the alumni, student body, faculty, and staff to produce a program that all can be proud,” says Gayle.

A native of Brooklyn, New York, Gayle joins the staff at Albany State after a successful thirteen-year run as an assistant and most recently, the head coach at St. Thomas University in Miami, Gardens Florida. From 2008-2012 he was an assistant before being promoted in July of 2012 where he went on to compile an overall record of 125-51 over six seasons as the head coach. In his first three years at the helm of the program, Gayle guided the Bobcats to the NAIA Division II Tournament advancing to the Sweet 16 in twice (2013, 2014). He was twice named Sun Conference Coach of the Year after leading the Bobcats to Sun Conference Regular Season titles during the 2013-2014 and 2017-2018 seasons. Gayle has also had success against NCAA Division II competition with a 6-3 record during his time at St. Thomas including a win over Florida Southern, who would go on to win the National Championship later that year.

His team also made history during the 2013-2014 season as they set a new school record for wins (26). During his tenure at St. Thomas, his program produced twelve All-Conference players, three All-Defensive team honorees, six NAIA All-Americans and three Dean’s List Student-Athletes. Gayle’s efforts were acknowledged by his peers as he was recently honored as the 2018 St. Thomas University Staff Member of the Year.

Gayle has also spent six years of his life in academia as an educator at both the middle and high school levels. During his time as the STEM Math Lead Teacher at Margate Middle School (Margate, Florida) he designed and developed a curriculum in Civil and Mechanical Engineering for grades 6th-8th.

He earned a Bachelor’s of Science degree in Mathematical Sciences from the University of Memphis in 2002 and completed his Master’s in Business Administration in 2007 from Tiffin University. Gayle and his wife Sherida have four children Sanai, Asaya, Solomon, and Asahel.