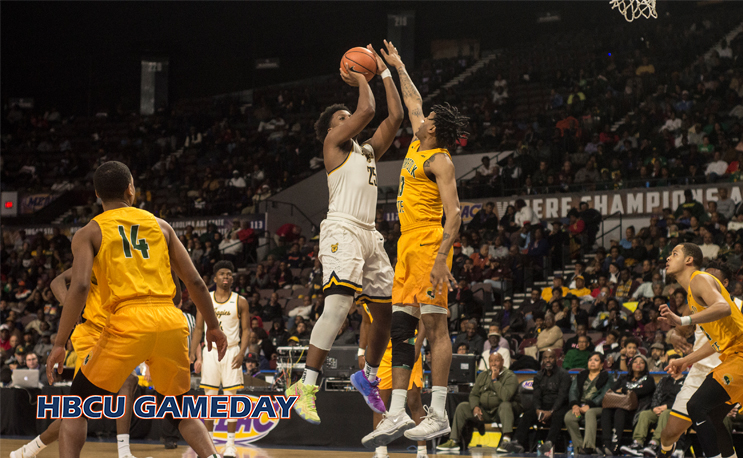 Former North Carolina A&T star Femi Olujobi decided to spend his final year of eligibility at DePaul earlier this spring. A transfer from Oakland University, he had a breakout season in Greensboro last year, but decided to take the path that many HBCU basketball stars have recently taken and transfer to a PWI.

Olujobi, a talented 6’8 scorer, recently opened up as to why he decided to leave after just one season on the court after averaging 16.3 points and 7.7 rebounds per game.

“I want to play in the NBA, and I feel like just being here [at DePaul], I know what I have to do because there are no days off,” Olujobi told The Undefeated. “At times at A&T, I could not put my best foot forward and still get away with it. That’s not going to happen here. This is the Big East. This is Big Boy Basketball.“

It’s a reasoning we’ve seen before several times over the past few years. In fact, its the second year in a row that the Aggies have lost their leading scorer to another Division I program. Sam Hunt did the same thing the previous summer, spending last season with NC State. His minutes dropped (from 34.4 to 16.1 ppg) along with his scoring average (from 12.7 to 5.5 ppg) for the ACC squad.

His team did make the NCAA Tournament, bowing out in the round of 64 to Seton Hall, but he and Olojubi would have been a headache for MEAC defenses and might have gotten there as well.

Here is how some other HBCU-to-PWI players have performed in recent years.

* James Daniel was a volume scorer during his three full years at Howard. In fact, in 2016-17, Daniel led the nation in scoring at 27 points per game. After being granted a redshirt following the 2016-17 season, he elected to move to Tennessee as a grad transfer. He averaged a career-low of 5.6 points per game in just 19.7 minutes per game with Tennessee in 2017-18 and was not selected in last week’s NBA Draft.

*Zach Lofton had one great season at Texas Southern, helping the team to the NCAA Tournament while winning SWAC Player of The Year during the 2016-17 season. Instead of spending his final year of eligibility in Houston, however, he decided to transfer to New Mexico State. Lofton actually upped his numbers across the board at New Mexico State, averaging 20.1 ppg and five rebounds per game while helping his team to a 28-6 record and an NCAA Tournament appearance. Despite those improved numbers, Lofton went undrafted as well last week. He will get a chance to play with the Detroit Pistons Summer League team.

* Deron Powers was the heartbeat of Hampton’s attack from 2012 through 2015, claiming Most Outstanding Player honors as he helped HiU claim the 2015 MEAC title. Soon after, though, he decided he wanted to play on a higher level. He transferred to Hofstra, where he averaged 13 points and 5.2 assists per game during the 2016-17 season. Hofstra did not make the NCAA Tournament that season, however. He was not drafted.

*Rashid Gaston was an emerging force in the MEAC at Norfolk State, averaging 15.5 and 9.6 rebounds per game as a junior in 2014-15. He left NSU and helped Xavier to the 2017 Elite Eight, averaging 7.4 points and 5.9 rebounds per game off the bench, but did not get selected in the NBA Draft. He played in Japan last season.

*Jermaine Ruttley was the top option his sole season at FAMU, averaging 17.4 ppg and 6.7 rebounds in the MEAC. He elected to finish his college career at Little-Rock Arkansas, where he averaged 3.2 points and 2.9 rebounds per game as a senior. The team did not make the NCAA Tournament and Ruttley was not drafted.