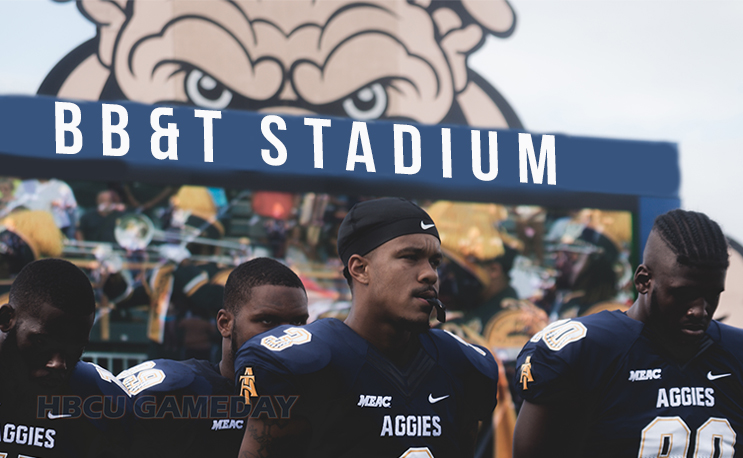 There are no two ways about it: The 2017-18 season was “The Year of The Aggie” in HBCU sports. North Carolina A&T won seven MEAC titles during the school year, as well as the HBCU football national championship.

As the program heads into the 2018-2019 academic and athletic school year, it is apparent that it is looking to ride its recent wave of success into the future.

On the heels of the school’s announcement of a historic naming rights deal with BB&T for its football stadium, A&T Director of Athletics Earl Hilton talked to Greensboro.com about the program’s current success and what the future holds for the nation’s largest HBCU.

Facility upgrades are at the top of his list

Hilton: “As you begin to recruit and succeed athletically and academically, you begin to win. As you win you have to spin that success into fundraising dollars. Which go into facilities. As those facilities improve you’re able to recruit a different brand of athletes, whose more successful in the classroom and the court.

We’re at the phase in the cycle where we have to make an investment in our facilities. Certainly, that drives much more of the decision of the student-athletes than it used to.”

He cited Irwin Belk Track, War Memorial Stadium and newly-minted BB&T Stadium as facilities that are in line for improvements.

Partnership with BB&T potentially part of something bigger

A&T’s $1.5 million naming rights deal received mixed reviews in the 24 hours following its announcement, but Hilton said it is hopefully just the start of a broader relationship.

“We think its a good partnership for us and BB&T. We expect from their perspective its a win-win. Certainly, from ours, it is. We’re excited to be partnered with them, we look forward to that relationship and expect to grow in that relationship, frankly.

We look forward to additional opportunities to interact and to partner together. Not only with BB&T but with other organizations and businesses in the community and regionally.”

Expect more naming rights to be sold, and quick

They won’t likely all be as big as BB&T, and all of them won’t be corporate.

“We’ve got a couple in the works right now. Not with corporations but with private foundations and families who are looking to provide some resources for naming opportunities for some smaller projects on campus. So definitely this is a model that we expect to continue to follow as we move forward in partnership with the university to renovate and upgrade significantly our facilities.”

It sounds like those naming deals will be the result of more Janice Bryant Howroyd-type agreements, moreso in style than scale.

For the first time in a long time, North Carolina A&T men’s basketball made plenty of noise in the MEAC. And not just on the court.

The atmosphere in the arena, dubbed “Club Corbett” by the students, was one that was at times overwhelming. Hilton said while he appreciates it, he’d also like to find some balance.

“I want it to be a place where families are comfortable bringing their children,” Hilton said. “Where its a family environment where its fun and happy, but it’s not something you would be worried about bringing your elementary school-aged daughter to see or be a part of. So there is a fine line we’re going to navigate.

“I want people to dread coming to A&T. I want it to be a place where our fans are a part of the experience and part of the competitive success we enjoy.”

The Aggies have spent their entire athletic history in HBCU conferences, first in the CIAA and now as a founding member of the MEAC. But with the landscape of Division I in general, and the MEAC in particular changing, its hard to say just what the future holds.

“A&T is always interested in making decisions and plans that are in the best interest of A&T. Our students and our student-athletes,” Hilton said.

We have been very deliberate in our internal discussions and dialogues about how A&T should be positioned. That will continue. We will continue to make those evaluations and assessments and continue to do what we think is in the best interest of North Carolina A&T.”

Of course, leaving an HBCU conference isn’t going to be popular with everyone if it happens. Just ask Hampton. But Hilton says that any move would be in the best interest of the athletic program and school.

“The decision would have to be based on rational, logical, defensible facts about what’s best for your school. If you have that as your backdrop…the pain is going to be there and its gonna be real, but everyone will understand.

Hilton still has mixed feelings on the Celebration Bowl

No school has benefited more from the Celebration Bowl than North Carolina A&T in its first three years, but Hilton wasn’t a firm supporter of it early on.

“When it was initially proposed, I was opposed to it. I wanted to compete for the national championship.”

Despite the financial success and exposure that the school has reaped, he seems to still be on the fence.

“I don’t have a firm answer,” he said. “I would love for there to be a way for the bowl game to work into the national championship framework like they do with the FBS teams where they have a bowl system that also implicates a playoff system.”