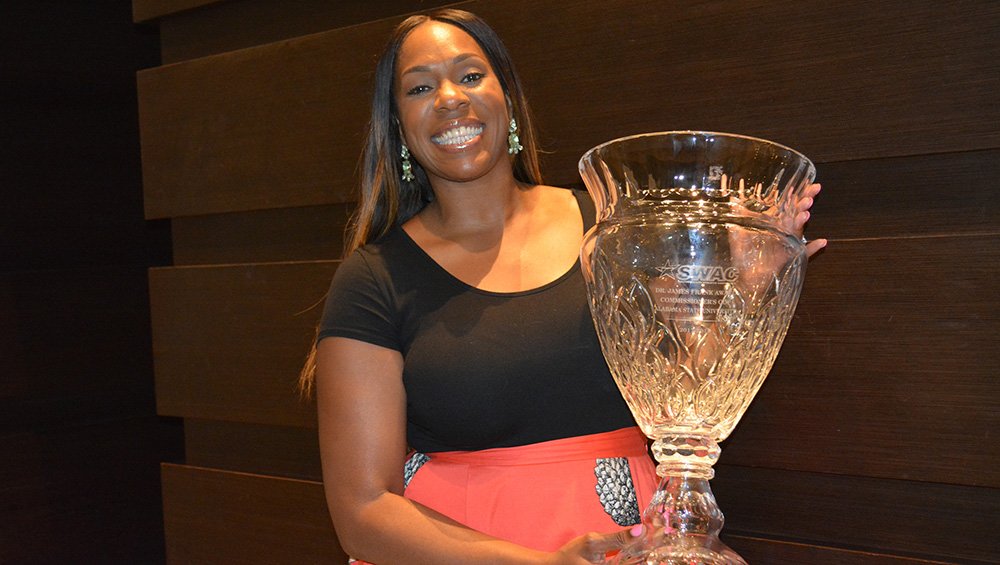 Once again, Alabama State is the gold standard in SWAC athletics. Check the stats, B.

BIRMINGHAM, Ala. | The Alabama State University Department of Intercollegiate Athletics was awarded the James Frank Award from the Southwestern Athletic Conference (SWAC) as the top athletic department conference-wide at the annual conference meetings Thursday afternoon.

Alabama State claimed the award with 182 points, finishing 17 points ahead of Prairie View A&M (165) in second place and 51 points ahead of third place Texas Southern (131).

“The James Frank Award culminates the year for Alabama State athletics,” Alabama State Interim Director of Athletics Jennifer Lynne Williams said. “This award puts an exclamation mark on what we, as a department, have been able to accomplish this season. It speaks volumes for the work our student-athletes, coaches and staff have put in throughout the year.”

“The work that goes into winning this award starts in the summer and the day our student-athletes walk through the doors of Alabama State,” Williams said. “Our teams compete at a high level every day, and not only did we win eight conference titles, but we also won five regular-season championships this season. It’s a blessing to be able to say we have won the commissioner’s cup for five straight years, and to be able to put it on top of the recent APR results and the conference championships just sums up a great year for Alabama State athletics.”

Alabama State also won the Magee/Jacket Award for the sixth consecutive time, which is presented to the top women’s athletic program in the conference – named after Sadie Magee who was the first women’s basketball coach at Jackson State and Barbara Jacket who led Prairie View A&M and the 1992 U.S. Women’s Olympic Track Team as the head coach. Alabama State ran away from the competition, accumulating 109 points – 19.5 points ahead of Prairie View A&M in second place. Alabama State was able to win six conference titles on the women’s side and reached the finals or the championship in two others.

Meanwhile, the men finished second in the C.D. Henry Award standings to Prairie View A&M. The Henry Award is presented to the top men’s athletic program and is named after former Grambling State chairman of the College of Health, Physical Education and Recreation Department from 1958-74, and served as the executive officer and secretary-statistician for the SWAC from 1968-73. The Hornets finished second with 73 points, finishing 2.5 points behind Prairie View A&M in the standings as the Hornets claimed one conference championship on the men’s side in 2017-18.

The streak of five consecutive awards matches the longest in SWAC history, held by Southern two different times. Southern won five consecutive Commissioner’s Cups from 1991-1997, and then again from 2001-06. The Hornets have won the award every year since 2013.