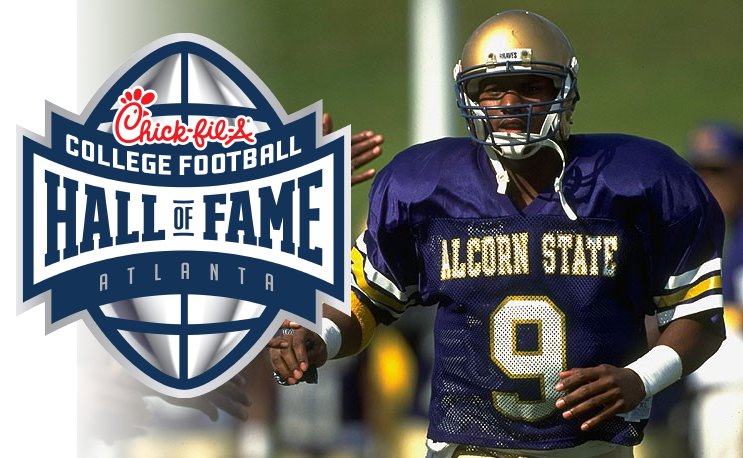 Nearly a quarter century after playing his last college football game, Steve “Air” McNair is one step closer to taking his place among the games’ all-time greats.

The former Alcorn State quarterback was one of 12 former HBCU greats named on the ballot for the 2019 College Football Hall of Fame on Monday.

Joining McNair on the ballot as a first timer is former Fort Valley State star Tyrone Poole. A two-time Southern Intercollegiate Athletic Conference (SIAC) Defensive Player of the Year (1993-94) Poole led FVSU to two conference titles…Recorded 44 pass breakups and 17 interceptions, returning four for TDs. He was selected by the Carolina Panthers in the first round of the 1995 NFL Draft and went on to a stellar NFL playing career.

McNair, a 1994 First Team All-American is still the all-time passing leader (14,496) in the FCS. He finished third in 1994 Heisman Trophy voting and the only four-time SWAC Offensive Player of the Year in league history. He also won the 1994 Walter Payton Award and led the Braves to two SWAC titles and two NCAA playoff appearances. He went on to a storied NFL career, earning co-MVP honors in 2003.

The announcement of the 2019 Class will be made Monday, Jan. 7, 2019, in Santa Clara, Calif. The 2019 class will officially be inducted during the 62nd NFF Annual Awards Dinner on Dec. 10, 2019, at the New York Hilton Midtown. The inductees will be permanently enshrined at the College Football Hall of Fame in Atlanta later that December and honored on the field during the 15th Annual National Hall of Fame Salute during the Chick-fil-A Peach Bowl. They will also be honored at their respective schools with an NFF Hall of Fame On-Campus Salute, presented by Fidelity Investments, during the 2019 season.

Below are the other HBCU players and coaches nominated.

Quarterback-1975 First Team All-American and Pittsburgh Courier National Player of the Year…Four-time All-SWAC selection and conference Player of the Year as a senior…Finished career as SWAC’s all-time leader in total offense (7,442 yards).

Led Morgan State to six Black College National Championship and 14 CIAA titles…Posted 11 undefeated seasons, including the 1943 team that did not allow a score from a single opponent…From 1932-39, led Bears to 54-game streak without a loss.