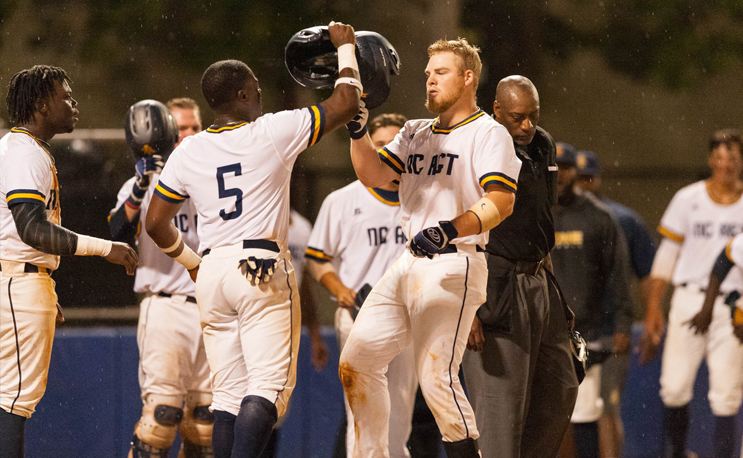 The Aggies (30-23) advanced to Friday’s semifinal, where they will face either Florida A&M or Coppin State. N.C. A&T is one win away from tying the program single-season record for wins.

North Carolina A&T State got going early, jumping out to a 3-0 lead after the first inning. Jarrett Norman got the scoring started with an RBI single before Dawnoven Smith scored on an error and Ryne Stanley singled home another run.

The Aggies scored on another error in the second to take a 4-0 lead, before pushing three more runs across in the bottom of the fourth. Forest Kimbrell started the scoring with an RBI single, before Smith singled home a run of his own.

Kimbrell later scored on a wild pitch to make it 7-0 Aggies.

After the Spartans scored a run in the top of the fifth, the Aggies blew the game open in the bottom of the sixth. Kimbrell scored on an error before Zach McLean smacked a grand slam to left field to give North Carolina A&T State a 12-1 lead.

Norfolk State picked up two more runs, one on a Stephen Baughan bomb in the seventh.

Tim Luth went seven innings, striking out four in picking up his sixth win of the season.

Norfolk State (19-29) fell to the elimination bracket, and the Spartans will face Bethune-Cookman at 9 a.m. in an elimination game.

Coppin State came from behind with a three-run sixth to take a 5-3 win over Florida A&M in the waning hours of Thursday night at Sliwa Stadium to close out the second day of the 2018 Mid-Eastern Athletic Conference (MEAC) Baseball Championship.

Baseball Takes a Bite Out of Florida A&M in MEAC Tournament; Matches Program-Record for Wins https://t.co/zpI4avXjwm

The Eagles (21-21-1) advance to Friday’s semifinal against North Carolina A&T State in a march-up of No. 1 seed. FAMU falls to the elimination bracket, where it will face either Bethune-Cookman or Norfolk State on Friday.

The Eagles struck first in the bottom of the first inning, when Caleb Duhay singled to right field to score Andres Santana, who had gone from first to third on a bunt. That play gave Coppin State a 1-0 lead.

Jacky Miles, Jr. tied the game at 1-1 in the top of the third with an RBI double.

Coppin State regained the lead in the bottom of the fourth; after Derek Lohr reached on an error and advanced to third, he scored on a Marcos Castillo single to left field to give the Eagles a 2-1 lead.

Miles tied the game again in the top of the fifth, singling home Ty Russ, before Brian Davis singled home Miles to put the Rattlers up for the first time at 3-2.

Duhay led off the bottom of the sixth with his second home run of the season, a solo shot to left center, that tied the game at 3-3. Nazier McIlwain then walked and Lohr doubled down the left field line, before Erik Crossman reached on an error that scored both runners and gave the Eagles a 5-3 lead.

The Rattlers managed four baserunners in the final three innings, but stranded all of them.

Duhay led the Eagles at the plate, going 3-for-4 and driving in two runs.

Despite not getting the decision, Coppin State starter Jahmon Taylor struck out eight in 4.2 innings pitched. Corey Treyes tossed a scoreless ninth for his eighth save of the season.