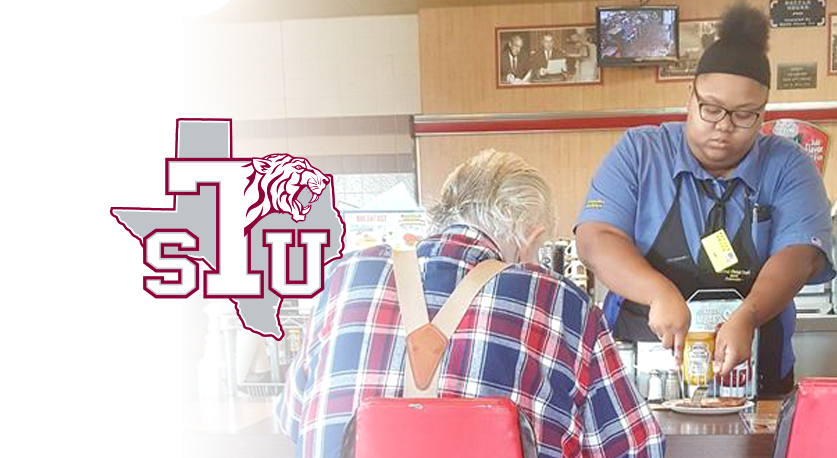 She was just trying to help and it didn’t go unnoticed.

Texas Southern will need some real MVP performances this week in order to get past North Carolina Central and then maybe get a chance to scrap with no. 1 seed Xavier. The University offered a scholarship this week to a true MVP, although she won’t help them very much in hoops.

Evoni Williams is a waitress at the Waffle House in La Marque, Texas. She’s been working there less than a year in an effort to save money for college.

You may have seen here recently in a viral photo helping cut the ham of an elderly man sitting at her counter.  Williams had no idea that someone was photographing her simple act of kindness.

The patron, on oxygen and struggling because of muscle issues in his hands, was appreciative but that was just the beginning.

This waitress took time to cut an elderly diner's ham, and the kind act won her a college scholarship https://t.co/kx1qoyzprX pic.twitter.com/HkSMIXiEKz

The mayor of La Marque proclaimed March 8 as Evoni ‘Nini’ Williams Day.  Texas Southern University, from nearby Houston, came in a little stronger.

President Austin Lane saw the story on social media and Texas Southern came up with a $16,000 scholarship for Williams.

“We wanted to reward Evoni’s act of kindness and let her know that good deeds do not go unnoticed,” Melinda Spaulding, an administrator at Texas Southern University told CNN.

Williams says she hopes to study business administration and one day open her own restaurant or hair salon.