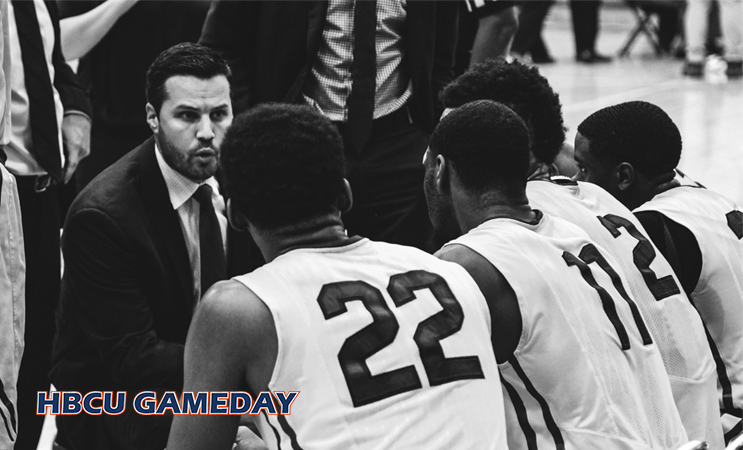 In the HBCU world, Bethune-Cookman is a football school. The Daytona Beach-based school has been a power on the gridiron since its days in the SIAC, and not too long ago they owned the MEAC in football.

But this season, thanks to a new coach and a squad of talented hoopers, BCU is challenging that “football school” narrative. With less than two weeks before the start of the MEAC Tournament, BCU is tied atop the conference with Savannah State and North Carolina A&T with a 10-3 conference record.

“This thing is a work in progress,” BCU coach Ryan Ridder said on Saturday. “We’re not a finished project, but we know that the more experience we get together the greater chance we have to be successful come postseason.”

Headlining BCU’s attack is Brandon Tabb. The senior has been on fire as of late, scoring 34 points in back-to-back games in Baltimore this weekend. First against Coppin State on Saturday and then against Morgan State on Monday.

He’s averaging a team-high 18.7 points this season and was named MEAC Player of the Week on Tuesday after scoring his 1,000th point against Coppin.

While he’s getting much-deserved accolades, he’s just one of the Wildcats weapons. Three of his teammates are averaging double-figures, including backcourt mate Isaiah Bailey. Bailey is making an impact his first season at BCU, as the 6-6 swingman is averaging 16.1 points, 5 rebounds and 4.5 assists per game.

Then there’s the big guy down low, Shawntrez Davis. The junior from Atlanta has been a force inside in the MEAC, averaging 14.6 points and 8.5 rebounds per game. He had a monster game against Norfolk State with 30 points and 14 rebounds and has had four other games of 20-plus points.

On The Fast Track

There are a lot of new pieces for BCU, but the biggest one has been coach Ryan Ridder. A first-time Division I coach at the ripe-old age of 33, he credits his staff for helping the team gel quickly.

“We’re extremely together,” Ridder said. “And I think that’s what our guys are really able to feed off. If you said, hey…’anyone of our guys tell us one thing about our group”…they would say we are together.’

“I know I don’t have all the answers that’s why I hired guys around me that are significantly better,” he said.

Ridder spent the past four seasons coaching at Daytona State College, a junior college located in the same city as BCU. He’s turned a team that was 10-22 in 2017 and led it to 16 wins, a number it hadn’t cracked since it won 18 games in 2011-12.

“Every staff lays out a couple things at the beginning of the year they want to do and one of those is to win a conference championship,” he said. “We’re no different than anybody else. Just to have an opportunity to be in the conversation, that’s all we can ask.”

With his team hitting its stride, the drive from “in the conversation” to leading the pack can come in a Daytona minute.