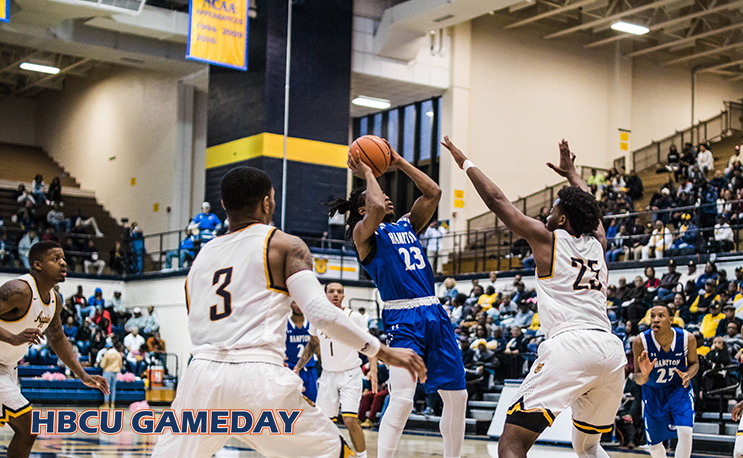 The men from the 757 had a big Monday night in North Carolina and Florida.

Don’t look now, but Norfolk State and Hampton are making their move in the MEAC as conference play heats up.

Both NSU and Hampton came up with much-needed road wins on Monday night.

Hampton scored a big win in Durham over North Carolina Central, beating the defending MEAC champs 86-70. It got a big night from Jermaine Marrow who put up 25 points, nine rebounds, and eight assists to continue his hot streak.

The Pirates hit the ground running against the Eagles, scoring the game’s first eight points and taking a 22-9 lead in the game’s first 8:35. The Eagles would cut the lead to 31-24 at halftime and get as close as 56-54 in the second half before the bottom fell out.

Calin Fisher added 16 points for Hampton, who has won four of its last five contests.

Hampton rained on the party that was put in place for NCCU head coach LeVelle Moton. At halftime, Moton’s jersey was retired, making for a bittersweet night for the Eagles.  Moton is the third leading scorer in North Carolina Central history.

Norfolk State went down to Daytona Beach to take on a Bethune-Cookman team it had beaten more than a week ago. NSU came away with an 83-79 win to claim its fourth-straight MEAC win and fifth win in its last six games.

Preston Bungei led the way for the Spartans with 20 points on 8-for-15 shooting and also grabbed 11 rebounds. Four teammates joined him in double-figures including Kyle Williams who had 16 points.

BCU got a monster effort from big man Shawntrez Davis who scored 30 points and grabbed 17 rebounds in the loss.

Norfolk State will head back home after its one-game road trip. Hampton, meanwhile, might get to spend one night at home before heading to D.C. to take on Howard in a game that was originally scheduled for last month. It will then head home to face…you guessed it…Norfolk State on Sunday.