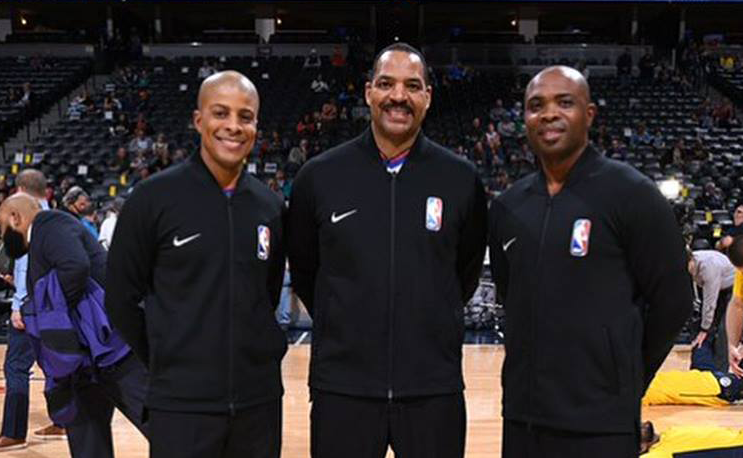 These three Jaguars pull off something that has never been done before.

There are 1,260 NBA regular season games every year and a lot of things happen during those games.  Until this past Friday night one thing had never happened, three officials who graduated from the same college had never called a game together. The streak is now over.

The goal for a good referee is to go unnoticed and not become a storyline in the game. When you make history, however, that rule of thumb gets tossed quicker than Draymond after a second technical.  So who are these guys?

#Repost @southernusports with @get_repost ・・・ On Jan 19, 2018 history was made as three NBA referees who graduated from the same school worked an NBA game at the same time. CJ Washington, Bennie Adams and Courtney Kirkland, graduates of Southern University, worked the Phoenix Suns vs Denver Nuggets games. #ProwlAsOne

CJ Washington graduated from SU in 2002. He’s a member of Kappa Alpha Psi Fraternity, Inc. and majored in Mass Communications. This is his second NBA season after coming up from an eight-year stint in the NBA D-league.

Washington called games for 10 years in Division I basketball, including a stint as a SWAC official.

Prior to becoming a professional basketball official, Washington worked in Houston as a licensed Residential Building Inspector.

Bennie Adams is a former math instructor at Southern University and a member of the class of 1990. He knows his numbers, he has a Masters and Bachelors degree in mathematics. He joined the NBA officiating staff 23 seasons ago, and prior to the start of this season, he had officiated 1,243 regular season and 17 Playoff games.

Adams officiated in the now-defunct CBA for three years before joining the NBA. He spent time as a SWAC official as well.

Courtney Kirkland is a 1999 graduate of SU with a degree in Computer Science. He’s old school NBA as well, with this being his 18th season in the league. He’s also spent time in the WNBA and CBA as well.

Kirkland might be the best ball player of the trio, according to his bio at least.  He led his high school basketball team in assists, free throw, and three-point shooting percentage.  His high school team made it to the state semifinals in back to back years.

Away from the court, Kirkland enjoys a number of things including writing and producing films.

HBCU officials are common in the NBA

These three aren’t the only NBA referees with HBCU connections. According to the National Basketball Referees Association website, there are 63 NBA officials. Of those 63 there are 10 officials who graduated or attended HBCUs.  That’s 15 percent of the league’s officials. Wow.

Tony Brown attended Florida A&M prior to transferring to Clark Atlanta University, where he received his degree in Finance. Brown has been calling games for 16 years in the NBA.

Sean Corbin has been officiating in the NBA for 23 years. He is a 1990 graduate of Coppin State where he played both baseball and basketball.

Karl Lane is now in his seventh year as an NBA official.  He graduated from Philander Smith College and used to call games in the SWAC and Gulf South Conference.

Eric Lewis played basketball and graduated from Bethune-Cookman and has been in the league as an official for 14 seasons.

Derrick Stafford has seen many of the stars during his 30 years and counting in the NBA. This 1978 Morehouse graduate was once a star on the field himself during his time with the Maroon Tigers.  He played football for two years and baseball for four. Stafford was All-Conference for three years in baseball and carried a pretty big stick in 1978 when he led the SIAC in hitting. He shared the spotlight with NFL referee Jerome Boger as co-MVP of the baseball team in 1976.

Haywoode Workman is a Hall of Fame member at Oral Roberts University but that’s not where his college career began. The Charlotte, N.C. native spent one-year playing basketball under the legendary Clarence “Big House” Gaines at Winston-Salem State University before transferring.  Workman is one of three former NBA players (Bernie Fryer and Leon Wood) to make the leap to NBA official.  Workman has been an NBA official for ten seasons.