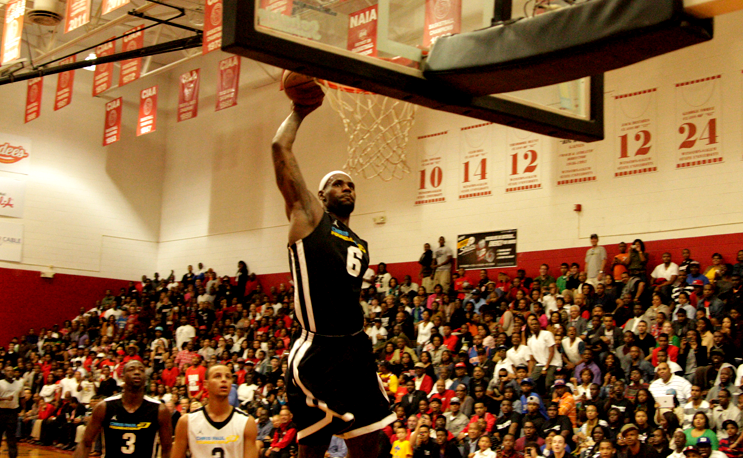 LeBron James was eating tacos when he got the news.

Grambling State’s Shakyla Hill has been arguably the biggest story in basketball this week as her quadruple-double drew an almost immediate response from many of the best ballers on the planet. From James Harden to Chris Paul and beyond. But there was one lone hold out that the young lady was waiting on.

When Hill appeared on ESPN’s The Six on Thursday, she told hosts Jemele Hill and Michael Smith that she was hoping to hear from James on her 15 point, 10 rebound, 10 assist, 10 steal performance.

She got her wish on Saturday.

James told reporters on Saturday that he was definitely aware of what Hill had accomplished against Alabama State.

“We was actually at a taco spot here when we seen it,” he said. “And me and Swish (J.R. Smith) was like…holy sh… That’s impressive.”

The three-time NBA Champion and four-time MVP is one of the most versatile players in NBA history, yet he’s never been able to pull of what Hill did on Wednesday.

“It doesn’t matter what level you’re at,” he said. “What type of league you’re in, male or female, if you’re able to get a quadruple-double in any facit…obviously not turnovers, but she did it with steals.”

“Did you see her statline at halftime? She had like four points, three rebounds, three steals, three assists. Then she went off in the second half. Big congratulations to her for sure.”

James’ words were refreshing after a week where Hill’s accomplishment was often trivialized instead of celebrated by men on social media. We won’t post them here but the threads don’t lie.

From the moment Hill’s accomplishment started getting picked up by mainstream media, less-than-affirming comments started rolling in, mostly from men. Instead of celebrating her great game, many people found it better to make crude jokes about her “making sandwiches” or flat out sexually lewd comments (WARNING: Graphic Language).

It’s unfortunate that the young lady has had to deal with that, but unfortunately not unexpected. But at least Hill got the affirmation of a guy who can actually play ball.