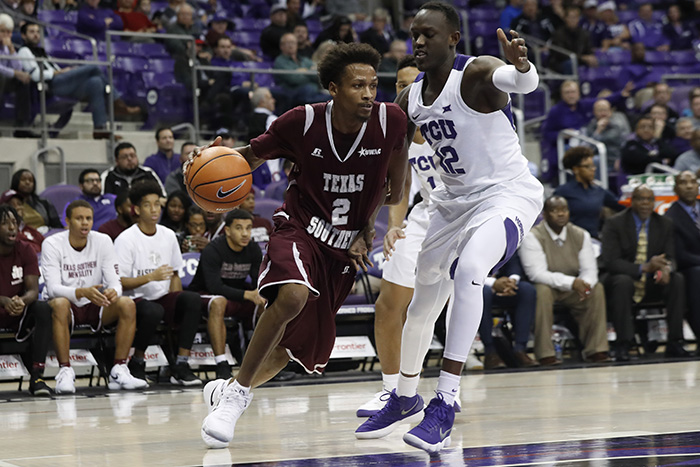 Jamar Sandifer led Southern and all scorers with 26 points.

Trailing by seven at halftime, Alabama State took their first lead of the second half with under six minutes to play and ran past Grambling State 74-66 in Southwestern Athletic Conference (SWAC) play Wednesday night at the Fredrick C. Hobdy Assembly Center. Branden Johnson led Alabama State (1-13, 1-1 SWAC) with his second double-double of the season with 13 points and 10 rebounds, including six offensive rebounds. Jacoby Ross led Alabama State with 14 points, while Reginald Gee added 11 and Ed Jones 10 in the win.

The back-and-forth game featured four lead changes and five ties. The Tigers hit a layup with 1:42 left, giving Jackson State a 57-56 lead and made a pair of free throws with 23 seconds left for a 59-56 lead. Petty’s last second three-point attempt caromed off the backboard as the time expired.

The Bulldogs held a slim 33-29 edge in rebounds while topping the Tigers 4-1 in fast-break scoring. Jackson State outshot AAMU 43 percent to 40 percent from the field and 32 percent to 27 from three-point range. The Tigers were 9-of-12 (75 percent) from the free throw line while the Bulldogs connected on 10-of-12 (83 percent).
Arthur Johnson led the Bulldogs in scoring with 11 points and totaled three rebounds and three assists. Andre Kennedy tallied 10 points and led with a team-high five rebounds.