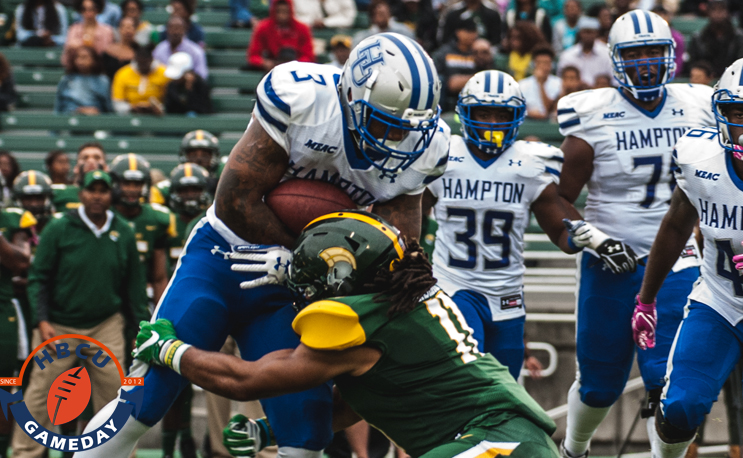 NORFOLK, Va. — On a misty afternoon for the 55th annual Battle of the Bay, it would come down to “Thunder and Lightning” for Hampton University to stop a three-game losing streak to homestanding Norfolk State Saturday.

Shai “Thunder” McKenzie scored two first quarter touchdowns, while Yahkee “Lightning” Johnson ran for 115 yards on 27 carries as Hampton held off a last ditch drive from Norfolk State to score a 16-14 win in front of over 6,100 at Dick Price Stadium.

Hampton (4-2, 3-0) scored its first win over Norfolk State under head coach Connell Maynor and maintained a share of first place in the Mid-Eastern Athletic Conference (MEAC) along with North Carolina A&T and North Carolina Central.

Hampton got on the board on its first drive going 70 yards in eight plays.  Delmon Williams hit Aulden Knight on the first play of the game for a 39-yard completion to the Norfolk State 36.  Following four Johnson runs and a 14-yard completion to Ronald Bell, McKenzie finished the drive with two runs of three and the final six yards for the first touchdown and a 7-0 lead with 11:24 left.

The special teams unit for Hampton helped set up the next touchdown drive as Harry Freeman IV blocked a Taylor Goettie punt to give Hampton possession on the Norfolk State 24.  McKenzie accounted for 14 of the 24 yards on that drive with a four-yard burst finishing it for a 14-0 Hampton lead with 1:22 left in the opening quarter.

Hampton outgained Norfolk State 137-40 in the opening quarter, but the Spartans responded in the second outgaining Hampton 127-16.  They scored on the first possession of the second quarter as Juwan Carter found Marcus Taylor with a 52-yard scoring strike as Taylor weaved through several defenders for a 14-7 Hampton lead with 13:32 left in the half.  The Pirates did dodge a scoring attempt at the end of the second quarter as a 34-yard field goal went wide right.

The only scoring of the third quarter came after the Pirates drove from their 45 to the NSU two but were stopped on a fourth and goal run by McKenzie.  The next play, Oral Varcciann pinned Larry Bishop in the end zone for a safety and a 16-7 Hampton lead with 7:12 remaining.

Norfolk State got within 16-14 on a four-yard touchdown pass from Carter to Taylor with 7:27 left in the game and had two chances down the stretch.  After holding Hampton on a three-and-out, the Spartans drove to the Hampton eight before a 25-yard field goal went wide right.   Hampton went three-and-out again, but the Spartans had one last chance as a Carter pass at the end of the game was deflected by Dereon Carr for the win.

Johnson ran for 115 yards on a season-high 27 carries and McKenzie ended up with 37 physical yards and his two first quarter touchdowns.  Williams was 6-of-10 for 100 yards passing, while Bell caught three passes for 50 yards to lead Hampton.  On defense, Davonte Spruill and Raheim Huskey had seven tackles each, while Steven Smith Jr. had six.

The Pirates return home for Homecoming on October 21 when they tangle with the Rattlers of Florida A&M University in a 2pm kickoff at Armstrong Stadium.