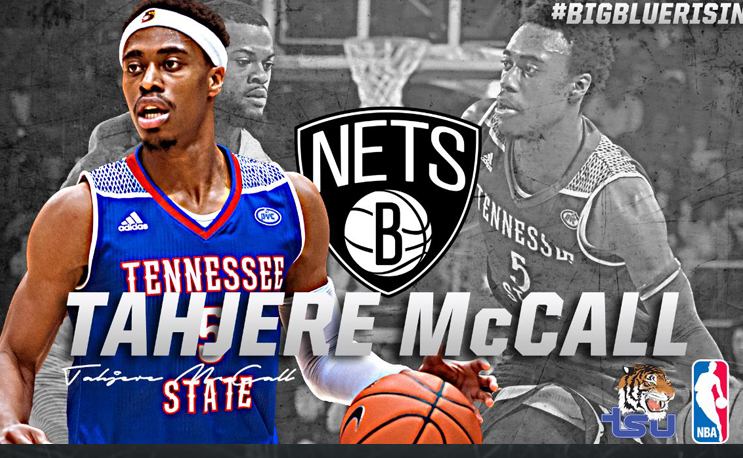 “When you start going against and competing with players you used to watch on TV like D’Angelo Russell, Isaiah Whitehead, Rondae Hollis-Jefferson, Caris Levert, and they become like your big brothers, and you learn what they know already, it just seems unreal,” McCall said. “I don’t think I’ve really had a chance to stop and realize the position I’m in right now and how blessed I truly am.”

McCall earned First Team All-Ohio Valley Conference as a junior and senior for the Tigers after transferring to TSU from Niagara University in New York. The Philadelphia, Pa. native thrived during his time in Nashville, helping the Tigers post a 37-24 mark in two seasons.

“We are all so proud of Tahj,” TSU Head Coach Dana Ford said. “He had a great summer and has shown the potential to be a pro. He represented TSU basketball in a great way while here. He has become an instant ambassador to our university.”

He went on to post 14.3 points, 5.0 rebounds, 5.1 assists and 2.8 steals per game during his senior campaign in 2016-17. McCall repeated as OVC Defensive Player of the Year and broke his own school record with 76 steals.

Throughout the summer, McCall worked out for a number of NBA teams including the Nets, 76ers and Wizards. He went on to sign with the Nets for the 2017 NBA Summer League and is now signed to the NBA team. McCall joins fellow TSU alum Robert Covington of the Philadelphia 76ers as former Tigers currently on NBA rosters.