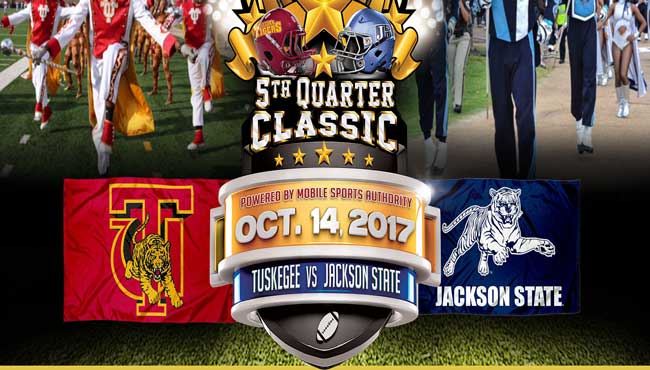 Tuskegee University is still contending for a SIAC championship, and a win over Jackson State this weekend in the Fifth Quarter Classic could rejuvenate their resume.  The Golden Tigers are in a favorable position in the SIAC at 4-2 overall and two victories over FCS opponents would be a nice offset to the 61-0 shellacking they took at Findlay.

The Jackson State Tigers on the other hand simply need a win. Something that has evaded them all season long thus far.  Losing to a Division II program would not only serve as a gut punch but also ensure the Tigers of a sub 500 winning percentage.

Willie Slater sounds more like a coach squarely focused on the big picture of the SIAC Championship heading into the game.

“We’re [about] to go play a nonconference game and a Division IAA school, so we got to try and stay healthy through that bad boy and then get back into conference play,” Slater said.

Our walk thru today was at @UMSWrightAthlet. The last college team to practice here was @TroyAthletics when they faced LSU pic.twitter.com/KNl1zKZPhj

Guys on the team aren’t playing their cards as close to the chest.

“We’re Tuskegee and we love competition. When we play anybody we really think that we can beat anybody. I’m really ready to play next Saturday, I’m looking forward to that game, ” said starting quarterback Jamarcus Ezell.

Ezell has been in and out of the lineup this year after dealing with a concussion at the end of the Albany State game. He’s started in back to back wins over Lane and Morehouse and made some big plays late against Morehouse in a comeback victory.

Jackson State coach Antonio Hughes has a pretty fair assessment of how his team will approach the Tuskegee quarterback.

“Willie is a great play caller, his quarterback is athletic, they fell behind the other day and he was able to make plays with his legs to bring them back. Maybe not a great passer but Willie is not going to ask him to do things that he can’t do.  They’ll keep you off balance with some play-action passes,” Hughes said during his weekly teleconference presser.

Division II vs Division I matchups are often close between the first team players and the separation can occur many times with second and third stringers.  Tuskegee, however,  showed in week one that they are capable of defeating a SWAC team on the road this season.  They’ve also shown a couple of times this year that their offense can spend the entire afternoon going three and out.

Jackson State, on the other hand, had respectable outings against Tennessee State and Grambling before losing to Arkansas Pine-Bluff, whose only other win has been against Division II Morehouse.  JSU was smoked in its last game versus Prairie View 38-9.

The Fifth Quarter Classic kicks off at 6 pm CST from Mobile, Alabama.