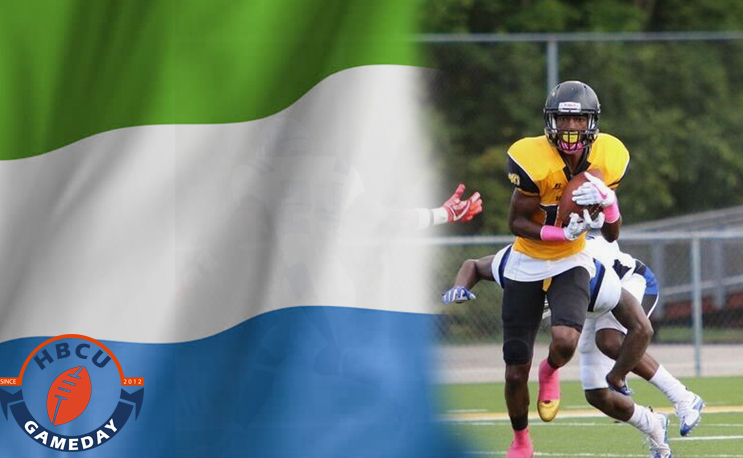 It’s a long way from Sierra Leone to Bowie State, but Lesana Sesay is adept at adjusting to the long ball.

Imagine having to pick up and move from your birthplace, not because your parent got a new job, but because of a civil war, escaping to one country and then moving to another just for safety. Bowie State receiver Lasana Sesay doesn’t have to imagine it, he had to live it.

In 2001, Sesay was living with his family in Sierra Leone. The war started in 1991 as the country was divided as the Revolutionary United Front (RUF), with support from the special forces of Charles Taylor’s National Patriotic Front of Liberia (NPFL), intervened in Sierra Leone in an attempt to overthrow the Joseph Momoh government.

The Move To Bowie

After living in California Sesay moved to Bowie, Maryland with his aunt. Once in Maryland, Sesay moved around quite a bit. He would go on to attend Bowie High School were he was two-sport athlete in track and football.

“Track was the first sport I ever played,” Sesay told HBCU Gameday. “I love track I had been running since I lived in Sierra Leone.”

Sesay was a 4×4 New Balance national champion his senior year in high school and also led Prince George’s County high schools in receiving yards. Standing at 6’4, 170 pounds, Sesay was a legit blazer and his Division I dreams seemed like a reality.

Coming out of high school after all the athletic success Sesay wasn’t able to achieve the SAT scores that would have got him to D1 football. Instead, Sesay found himself in Kansas at NAIA school called Avila University.

“I loved it at Avilia it was a nice campus and a great school academically, but you know God had other plans and I believe after being there for a little it was time for me to move back home,” Sesay said.

Sesay ultimately transferred prior to the 2016 season, but was ruled ineligible due to lack of credits being able to transfer over from his previous school. He watched from the sidelines as Bowie, led by Amir Hall and star receiver Nyme Manns, won its second consecutive CIAA North title. CIAA defenses are probably thanking their lucky stars they didn’t have to defend Manns and Sesay at the same time.
[postBannerAd]

As a receiver, Sesay runs routes on the regular. It’s in his job description when he signed up to play the position. The routes he took in his life though made him the man he is today and put him in this position he’s at right now at Bowie State.

“I have a desire to great. The drive for success resonates with me. I understand that hard aches are just testimonies in the end,” Sesay said. “God motivates me and I know with Him everything will be ok and God will deliver me out of everything.”

Sesay this year is having great success on the field as he is ranked fifth in the nation with 24 yards per catch. He has earned the nickname “Randy Moss, Jr” or “Home Run Hommad” (he is normally called Mohamed by his teammates) for his big-play ability. Sesay is part of a special receiver crew at Bowie this year who has three of the top five receivers statistically in the conference on the top scoring team in the country.

“I love these guys there like my family we worked so hard this summer and now we’re trying to show the hard work we put in,” Sesay said. “Like we’re a family, Britt, Lock, Geo, Deron, Tez, Dev, Ej and Tre we all push each other.”

Sesay on the year has 530 yards on only 22 receptions to go along with five touchdowns. After all the 6’4, junior speedster has been through he has a reason to play and doesn’t take it for granted.

“I play for God and for my family and my team. God has done so much for me I just want to work hard for Him so that He gets all the glory and people see that,” he said. “Also my family I do it for them without God and them I’m not here today.