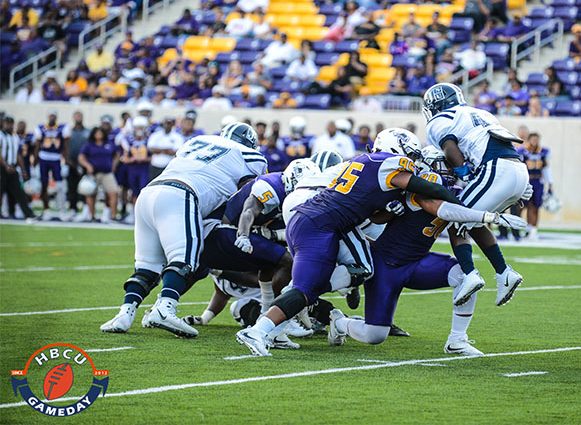 Prairie View picked up the biggest win yet in its new stadium while Jackson State remains winless after five games.

PVAMU (2-2 overall, 2-0 SWAC) led 17-3 after the opening quarter in leading at halftime for the first time in six games in the new facility, posting its highest scoring output of the season heading into next week’s SWAC Western Division showdown against Grambling in the State Fair Classic.

“I thought the guys did a really good job of responding,” Prairie View A&M head coach Willie Simmons said. “This week, we challenged them to focus on the task at hand. Everyone knows how important the Grambling game is. They’ve been our Achilles heel for the last two years. It was a tall task to get our guys to focus on the game this week against Jackson State. I applaud their effort for coming out focused and locked in from the very get-go.”

Our Social Media Team is bringing us the best fan coverage! Shout out to .@pvamu_lcom major .@Suti_love for this PV Swag Surf moment pic.twitter.com/tPTduxOhdT

The Panther defense forced five takeaways (four fumbles, one interception) and recorded four sacks in keeping JSU (0-5, 0-2) out of the end zone until just over a minute remaining in the game. LB Jalyn Williams led the Panthers with seven tackles, including a sack, two tackles for loss, and one fumble recovery. He has eight tackles for loss in the past three games.

“The defense continues to play at an extremely high level,” Simmons said. “Opportunistic football. What can you say with five takeaways. Again, they did a great job of stopping the run, and making the other team one-dimensional.”
[postBannerAd]
Offensively, PVAMU converted two of the turnovers into points and had a balanced attack (208 rushing yards, 231 passing yards) in gaining 439 yards total offense.