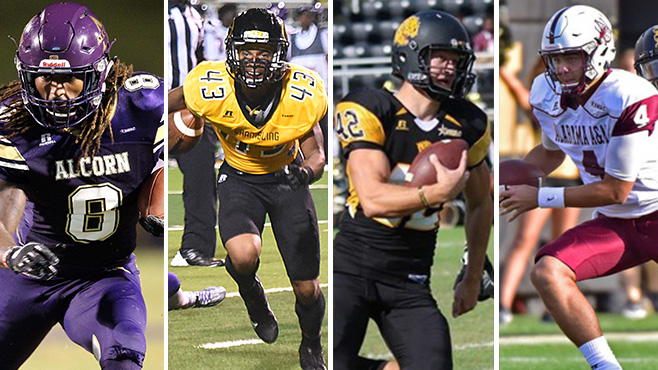 Turner recorded the second-most rushing yards in school history with 272 on Saturday to lead the Braves to a 48-31 victory over Southern. He scored three touchdowns including two on the ground and one receiving.

Turner garnered 21 carries for an average of 13.0 yards per rush. The Braves rushed for 402 yards in the game. Turner more-than doubled his previous career-high in rushing for 131 yards in the season-opener this year against Miles College.

Johnson finished with four solo tackles, three interceptions (all in the first half) and returned a blocked extra point for the two-point conversion. His first interception was returned for a 35-yard touchdown.

He had one tackle for a loss of three yards.

Jamie Gillan had four punts inside the 20-yard line vs. JSU. His longest punt was 46 yards and he averaged 38.8 yards per punt. Gillan also buried the game-tying 33-yard field goal when UAPB trailed by three with 15 seconds left in the 4th quarter, forcing overtime.

Glass was 22-of-37 passing for 337 yards with two TDs as A&M rolled up 505 yards of offense in a 30-13 win over Texas Southern. Glass completed passes to nine different receivers.