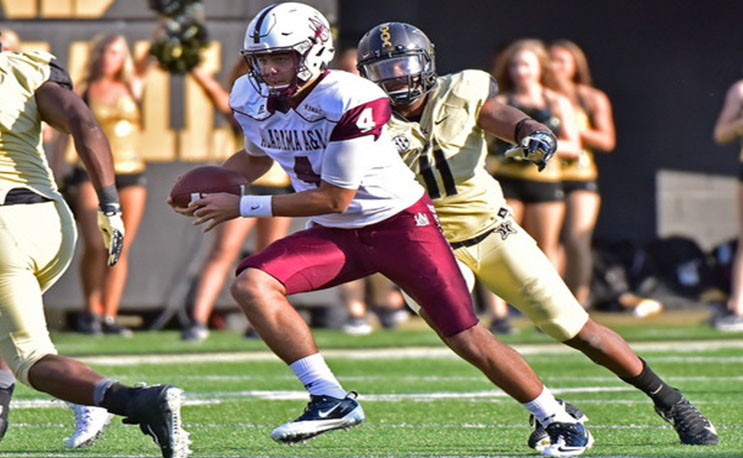 If you’re an Alabama A&M fan, you fell in love with how they came out against Texas Southern on Saturday night. The A&M offense took center stage in Huntsville, scoring 23 unanswered points in the first half en route to a 30-13 victory.

The Bulldog offense was led by quarterback Aqeel Glass, who was 22 of 37 passing for 337 yards. Glass had a pair of 60-yard passes that belong on a highlight reel. The first was a 62-yard touchdown pass to Octayvious Miles. The second was a 61-yard pass to Ledarion Heath. The Bulldog offense also had a great night on the ground, rushing for 168 yards. Oddly enough the Bulldog rushing attack was led by receiver Octavious Miles, who compiled 70 yards rushing on a couple of reverse plays.

In the 3rd quarter, Texas Southern deployed a two-quarterback system that featured Jay Christophe and Dominic DeLira. The switch created a spark for TSU, scoring 13 points in the third quarter. However, it was too little too late.  Glass struck gold again on a 13 yard pass to Isaiah Bailey. The touchdown brought to the score to 30-13 in the third quarter. The Tigers nor the Bulldogs got on the board in the 4th quarter.

The Tigers will have a short week as they host the high-powered rushing attack of De’Lance Turner and the Alcorn State Braves on Friday in Houston, Texas.

Alabama A&M will celebrate homecoming this weekend when they welcome UAPB.