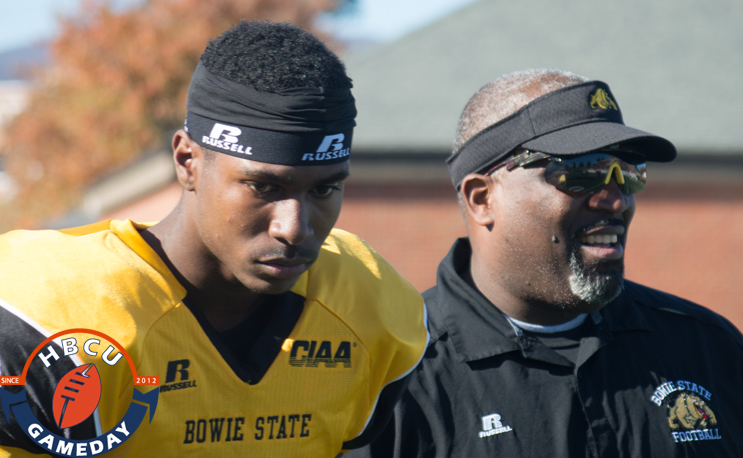 With a win against Winston-Salem State in its back pocket, Bowie State let it all hang out against St. Augustine’s on Saturday. BSU came away with a 66-20 win on the road with a record-setting performance to improve to 3-0.

As usual, Amir Hall led the charge. After a statistically slow game passing-wise the previous week against WSSU, Hall bounced back big time with 433 yards passing along with six passing touchdowns, adding two on the ground for good measure to set a school record.

Brandon Britton, who appeared on our top five CIAA receivers before the season, set a school record with four receiving scores in one game. BSU’s offense, in general, was impressive as they came up a yard short of the school record in total yards with 731 yards.

Bowie State found themselves down 20-14 with 9:28 left in the second quarter after St. Augustine freshman defensive back Sean Smith returned a fumble 92 yards for a score.

Bowie State calmly responded with 52 unanswered points, coming up with a  record-setting day offensively as its defense tightened up the rest of the way.

Saint Aug announcer: Bowie can score a ton of points in a hurry and so can we. #waitwhat pic.twitter.com/hW1TAoMBmj

A case for being ranked

Last week when the AFCA polls came out, Bowie State found itself on the outside-looking-in of the top 25. The Bulldogs received 58 votes but it wasn’t enough to get them in even after beating the previous 19th ranked Winston Salem Rams.

“I’m not tripping off the rankings if we’re supposed to be ranked will be ranked,” offensive coordinator Moses Ware said. “Our goal is to make sure we get better every single week and everything else will work itself out.”

A 3-0 performance, with a win against a nationally ranked opponent should make BSU a shoe-in for a spot in the top 25.