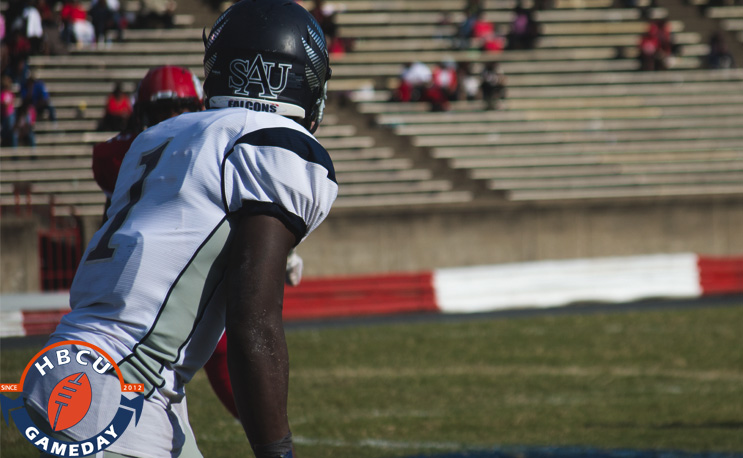 Big plays are the name of the game in the CIAA and these receivers make them.

Nyme Manns received a lot of notoriety last year as far as receivers go in the CIAA, rightfully so but, Kelly was no after thought in defensive coordinators heads himself. The 2016 first team all-conference performer averaged a staggering 17.2 yards per catch for the season. He finished the year with 792 yard on 46 catches and six touchdowns. On the national stage against Bowie State on ESPN Kelly only had 3 catches but went for 114 yards with one touchdown in a crucial part of the leading Virginia Union from 21 down to defeat Bowie State. This Miami, Florida blazer should get even more touches this year now that William Stanback (Green Bay Packers) and Hakeem Holland  (Shepherd University) are gone.

St. Augustine has two players in both of our top 5 categories for the CIAA (D.J. Johnson, QB). Boyd is the most physically gifted receiver on the list standing at 6’4, 250 pounds a legitimate pro-prospect. This giant from Houston, Texas is the exact definition of a Red Zone threat. Johnson only played in eight games last year and had seven touchdowns and 576 yards for the Falcons. Boyd was a force against VUU, torching the Panthers for 131 yards. With his quarterback D.J. Johnson having a year under his belt at the helm the sky is the limit for Boyd.

Shaw’s all-time leading receiver checks in at no. 3 on this list. Long has only played two years at Shaw University since transferring from North Carolina A&T. He is already Shaw’s all time leader in receptions at 103 and top 5 in touchdowns and yards. Long is a do it all receiver for the Bears who probably faced the most double teams in the conference last year outside of Manns. This year he will have help to deal with the double teams in another transfer from North Carolina A&T, Marquis Gorham, who appeared on this list for MEAC receivers in 2013. Long has 103 catches in two years for the Bears and his production should be better this year now that he has help.

Coming into 2016, Bowie State was expected to have the best duo in the conference with Manns returning as well as Kerrick Pollock. The Miami speedster lit the conference up in 2015 with 705 yards on 37 catches with an average of 19 yards per catch, and six receiving touchdowns and with a punt return for a touchdown in the mix as well. In Bowie State’s biggest games against Virginia State and the CIAA title game in 2015, Pollock was the go to guy, going for better than 100 yards in each game. An offseason leg injury kept him on the sideline last season for BSU.

Pollock is arguably the best receiver in the conference and would be higher if he would have played last year. His return gives Hall another weapon in the arsenal. Scary, right?

Just like Amir Hall, last year Brandon Britton was thrust into the starting line-up when Kerrick Pollock (ranked above) went down to injury. Britton didn’t disappoint for the Bulldogs as he was a viable option for Amir Hall last year. Britton finished the year with 497 yards, 34 catches and three touchdowns for the Bulldogs.  Britton has the knack for the big play: just ask Fayettville State and Virginia State about that. Britton and Pollock should for a formidable duo for the Bulldogs this year.