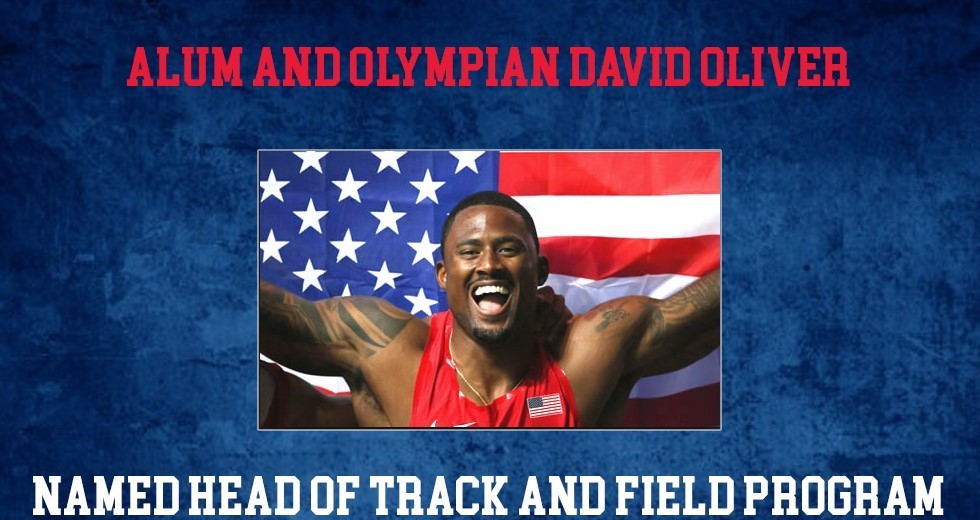 World Champion hurdler and alum returns to the Mecca

WASHINGTON (September 5, 2017) – Director of Athletics Kery Davis named former Olympian and alum David Oliver as its Director for Track & Field Program at Howard University. The announcement was made on Tuesday, Sept. 5.

“We are thrilled to welcome one of Howard’s most decorated former student-athletes back to the Mecca,” said Davis. “David is a globally recognized track and field champion and brings a unique passion to help student-athletes achieve their dreams on the track, in the classroom and in life after Howard. Most importantly, his personal achievements at the highest levels of competition will be an example to our student-athletes of what you can achieve through hard work, dedication, and passion for your craft.”

The Denver, Colo., native was destined to be a track & field star after his mother, Brenda Chambers, secured a spot on the 1980 Olympic Team in the 400-meter hurdles.

Oliver returns to his alma mater as a highly decorated professional athlete.  He was the 2008 Olympic Bronze Medalist in the 110-meter hurdles, and the 2013 World Champion in the same event.  On the indoor track and field stage, he earned the Gold medal at the 2008 USA Indoor Championships in the  60-meter hurdles and bronze in the 2010 World Championships.  He maintained top 10 rankings in the world for 11 consecutive seasons and has received several accolades including the 2010 Jesse Owens Award which recognizes the USA’s Most Outstanding Track Athlete.  A two-time All-American as student-athlete at Howard University, Oliver was inducted into the 2016 Mid-Eastern Athletic Conference Hall of Fame and the 2014 Howard University Hall of Fame.

“I am happy to be back,” Oliver stated. “I am looking forward to taking over the reins and rebuilding our program.”

Off the track, Oliver dedicates his time to helping with youth track competitions and mentorship through the David Oliver Indoor Classic in Winston Salem, N.C., and David Oliver Classic in Washington, D.C., while assisting sponsored athletes on the Quicksilver Track Club in Atlanta, Ga.

“During my tenure I’ve gotten to know Mr. Oliver very well. I’ve been impressed with his dedication to his craft that has seen him victorious at the highest level of his sport,” said University President Wayne A.I. Frederick. “He represents the best of what Howard University has produced. He understands that our focus in the classroom and on the field of competition must be excellent and I’m confident that he will equip Howard athletes with the tools to ensure their all-around success.”

Oliver has been featured in several major magazines, including Essence Magazine, Sports Illustrated for Kids, Sobe Fit Magazine, Stack Magazine, Spikes Magazine, and ESPN the Magazine. In Sept. 2008, he was honored at HU’s 141st Opening Convocation for his outstanding achievements in athletics.

Oliver obtained his bachelor’s degree from Howard University in business administration in 2004. He is married to Emily Oliver and they have one son, Dawson (age 6).

For more information, visit the Bison Athletics website at www.HUBison.com.