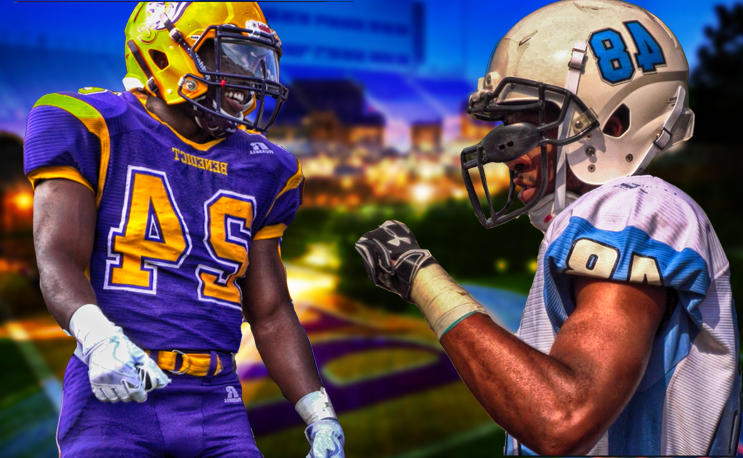 The Tigers win bragging rights in SIAC vs CIAA showdown

The Tigers jumped out to a 14-0 lead in the first half and then got an exciting 60-yard touchdown from Trini Charlton in the third quarter to help secure the season opening victory.

“We’re better than we were last year; we’re a little bit further along, but as you can see we’ve a long way to go to play a complete ballgame,” said Benedict head coach Mike White. “I’m just happy we came out with more points than they did.”

Benedict gained 248 yards on the ground, with Charlton doing the most damage with 126 yards on 15 carries. Charlton was named the game’s Most Valuable Player.

The Tigers struck first when quarterback Dominique Harris pushed his way in from two yards out for a 6-0 lead with 7:12 left in the first quarter. At the start of the second quarter, the Tigers downed a 33-yard punt by Tory Mimbs at the 3-yard line. Two plays later, Jamal Heard and Amari Andrews sandwiched Livingstone quarterback Xavier Longerbeam in the end zone for a safety and an 8-0 lead with 14:50 left in the first half.

Later in the quarter, Mimbs booted a 44-yard punt, but Livingstone’s Jeremy Lewis dropped the ball and Benedict’s Raheem Jennings jumped on the loose ball in the end zone for a Tiger touchdown and a 14-0 lead.

The Blue Bears scored on their first possession of the second half when Thaddeus Bell, who replaced Longerbeam at quarterback, floated a 31-yard pass to Jarius Richardson. Justin Ruffin ran in the 2-point conversion to cut the lead to 14-8 with 10:37 remaining in the third quarter.

The Tigers deflated any momentum the Blue Bears may have gained. Starting from their own 18-yard line, Harris had passes of 12 and 9 yards to Wayne Brown and Okechi Ntiasagwe to move the ball to the Benedict 40-yard line. Charlton took a handoff through the left side of the line, found a hole and outran the coverage for a 60-yard score.

“It’s the O-line. We’ve got a great O-Line,” Charlton said. “I didn’t do anything. They just opened the holes and I ran through them. I just saw green grass. It was wide open.”

Harris guided the Tigers on a 61-yard drive in the fourth quarter. On the eight-play drive, he completed four of five pass attempts, including the final 16-yard pass to Wayne Brown in the back corner of the end zone. Harris, who has not played competitive football since 2012 at Northwest Community College, played the entire game under center and completed 10-of-25 passes for 117 yards and one touchdown while throwing two interceptions.

The Harris to Brown touchdown gave Benedict a 28-8 lead with 7:33 remaining on the clock. The Blue Bears went on a long 16-play, 78-yard drive with Spencer Ludin, the third Blue Bear quarterback of the game, completing a six-yard pass to Ruben Lawhorn for the touchdown with 1:03 left.

Benedict recovered the on-side kick attempt by Livingstone and the Tigers ran out the final minute of the clock.

Benedict gave up 264 yards of total offense to Livingstone. The Benedict defense held the Blue Bears to two first downs and 105 yards in the first half.

“We kept them from running, we put good pressure on the passer, but then we missed a few tackles and all of a sudden it changed the game,” White said. “We’ve got to stay focused and, as they say, play it for four quarters.”

Benedict travels to Gaffney, S.C. for next week’s game to take on Limestone College. Kickoff is 7 p.m. at The Reservation Stadium.