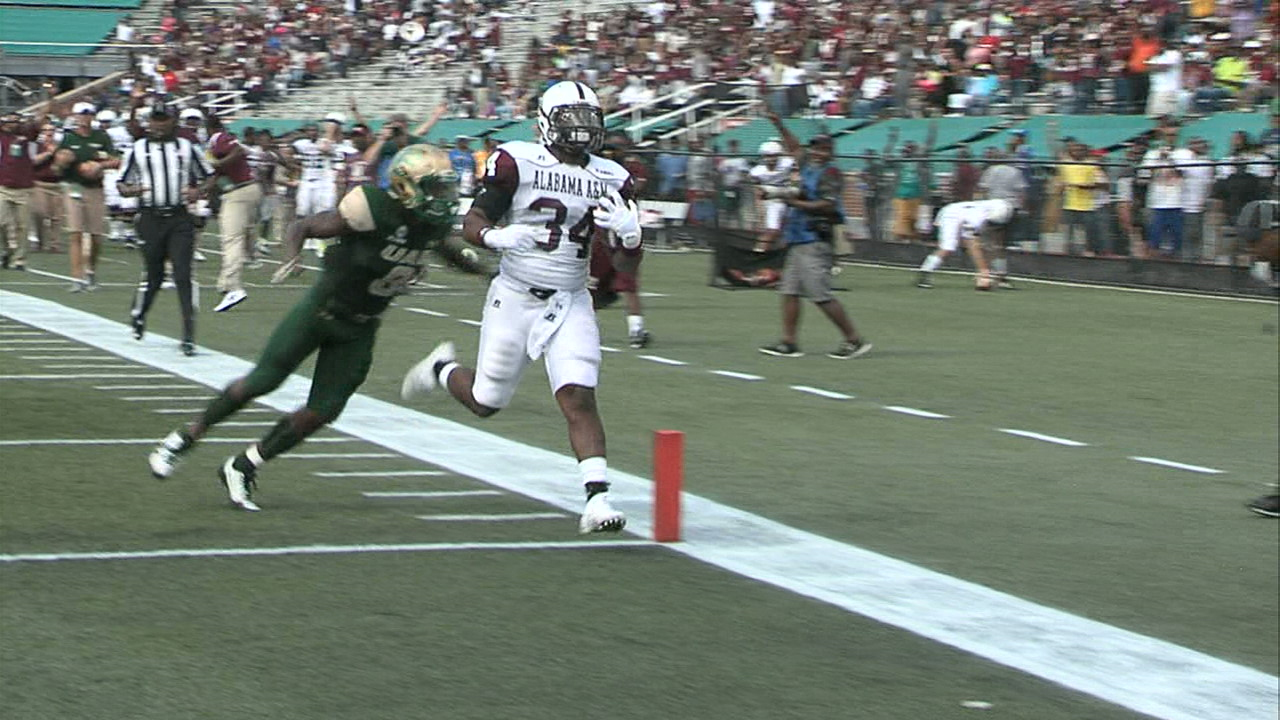 Just a three point game at the break.

BIRMINGHAM — It wasn’t quite the outcome the Bulldogs were looking for, but they proved to be competitive Saturday despite a 38-7 loss to UAB.

It was the season opener for both teams and the first game in two seasons for UAB, which had its program dropped after the 2014 season.

“The result was obviously not what we wanted,” said Alabama A&M Head Coach James Spady. “But we are going to build … and this game will help us going forward.”

Nonetheless, Alabama A&M went toe-to-toe with the C-USA Blazers for the better of three-quarters before UAB pulled away.

“I felt we had a pretty good first half performance,” Spady said. “I thought things were pretty even there in the first half (UAB lead 10-7 at halftime).

“Some things happened to us in the second half that led to a little breakdown here and there, however it wasn’t a complete breakdown. Our guys still fought and were competitive.”

The Blazers scored on their first possession of the game, moving downfield on a 14-play, 76-yard drive.

But, after that, the A&M defense adjusted to UAB and kept them out of the endzone again until about 6:37 left in the third quarter.

Linebacker Kenneth Davis led all tacklers with 10 tackles, including eight solo stops. He also had two sacks for minus-eight yards and two tackles for loss for minus-nine yards. Harvey Harris had eight tackles in his first game playing defense after a three-year career as a Bulldog running back.

Since this was UAB’s first game in three years, the Bulldogs didn’t have any film or scouting reports so, basically, they were going into the game blind.

“I want to give (UAB) Coach (Bill) Clark and his guys credit,” Spady said. “That was a better game than I thought they would be and I’m really proud of our guys for competing.”

The Bulldogs got on the board early in the second half when freshman quarterback Aqeel Glass connected with Roderick Randolph on a 46-yard catch-and-run touchdown pass. Nick Carden kicked the point-after and the game was tied 7-7 with 2:24 left in the first half.

However, UAB answered back with a field goal about a minute later for the 10-7 halftime lead.

Glass and Damion May split quarterback duties in the game. Glass was 7 of 17 for 101 yards. He had an interception and the TD pass to Randolph. May was 6-for-12 for 37 yards.

The Bulldogs continue their nonconference schedule next weekend with a trip to Vanderbilt on Saturday. Kickoff is 3 p.m.

Spady said the Bulldogs will be ready for the date in the Music City.

“We’re playing a SEC opponent,” he said. “Our guys will have no trouble getting motivated – not only because it’s another football game but it’s the chance to play a SEC opponent that made a bowl game last year.”