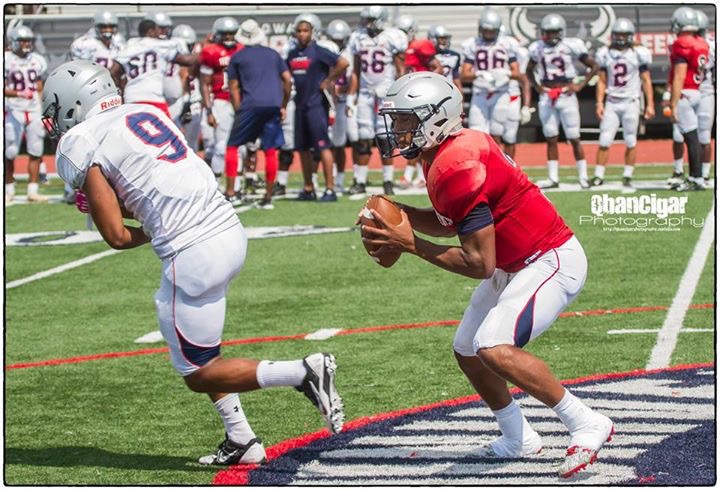 A new coach, blue chip quarterback and an FCS All-American hoping to get Howard football on track.

Washington D.C., AKA “Chocolate City” is the birthplace of go-go music. The late D.C. legend and “God-Father of Go-Go” Chuck Brown help give Washingtonians a musical flair of its own and brought it to the masses.

Then there are other well-known go-go bands like Rare Essence or Backyard Band who are two of the more prominent bands from the District. In every go-go there are different parts that make the band unique such as the “lead mic” the face of the band or the “bounce beat” which is the reason people come to the go-go. Go-go has spread along the East Coast and people outside of the “DMV” have learned or heard about the D.C. flare.

So what does this have to do with football?

Starting with its season opener September 2nd vs. UNLV, 2017 Howard is hoping to take their own “go-go” show on the road. No, Howard doesn’t have a band but they do have the “Go-Go Offense.” Howard’s go-go band manager is offensive coordinator Brennan Marion, who is entering his first year as Howard’s offensive coordinator.  Marion is young, energetic coach who is NCAA record holder for yards per catch in a career (28.1) and yards per catch in a season (30.1).

He’s a graduate of Tulsa University whose backstory from Pittsburgh, PA, is incredible. Marion is used to helping turn programs around as he did at Tulsa, helping turn it into a winner.

” The obstacle of turning a program around is something I’ve done my whole career. My whole career has been about turning around projects, I love the challenge.”

Marion came up with the name for Howard’s new-look offense while chatting with his mother.

“My mom was the one who explained the D.C. culture and music to me and I was like yeah that matches us going fast tempo. Go-go music is a vibe, it’s for the culture!

Running Howard’s offense is “lead mic” quarterback freshman Caylin Newton, the younger brother of the Carolina Panthers quarterback. The younger Newton is his own player and person, looking to make a name for himself. Newton was a three-star recruit out of Georgia who arrived on campus early in the spring and is hoping to be a difference maker.

“I put the team’s goal above all individual goals,” Newton told HBCU Gameday. “Whatever is going to help the team I will do whether it is running the ball every play with 1 attempt or 100 pass attempts I will do to win.”

Newton says the biggest difference he has seen between college and high school is that now everyone has a purpose for playing.

“The thing I have noticed more than anything is that people are doing it for a purpose. For some people this all they have and they are going to do whatever they can to make it.”

In the “DMV” area among teens and adults as well if you talk to them about go-go music or different bands you’ll hear the term “bounce beat.” The bounce beat is what separates some go-go bands from others. “Who’s got that bounce?” is a question DMV natives love to ask.

Well if you want to know “Who’s got that bounce” in college football, that would be senior running back Anthony Philyaw. Philyaw is one of the top football players not just in HBCU ranks but across the FCS as he has appeared on numerous preseason award lists following a spectacular junior season. Even after a great year, Philyaw believes there’s room for improvement.

” I just want to improve my overall game and as team, whether were running inside zone or outside zone or passing the ball I want us to get better every day,” Philyaw told HBCU Gameday.

Of course, the head man in charge is Mike London. The former UVa. and Richmond coach is hoping to make a difference in a program that hasn’t had much success in the last two decades.

Howard hasn’t won the MEAC since 1993, but this year is it is hoping to live up to the hype and buzz surrounding the program with the additions of London and Newton along with Philyaw. London has hired an experienced staff along with him including defensive coordinator Vincent Brown along with Marion.