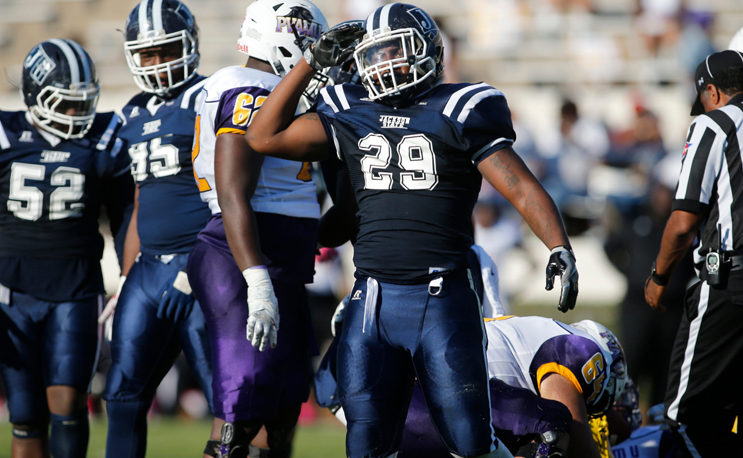 Getting to the NFL is a lifelong dream for pretty much every kid who has ever picked up a football. Two weeks ago, Javancy Jones was on the cusp of making that dream a reality. Now it looks like he may be giving up the game for good. At least playing it.

The former Jackson State star revealed in a Facebook post on Sunday that not only had he been cut by the Arizona Cardinals, he ‘s stepping away from the game.

“I want to thank everybody for the love and support, but my journey has came to a pause,” Jones wrote.

The JSU linebacker/defensive end was given a tryout with the team following the NFL Draft. At once thought to be a potential sleeper in the draft, Jones says he wasn’t offered a contract due to one of his agents being “money hungry.”

Jones went on to say that the Tennessee Titans called him to camp, but he declined their offer. And, let him tell it, he wasn’t too upset with not sticking in Arizona.

“It’s crazy how this whole weekend I prayed for my own downfall because I actually love the game of football, but I don’t like playing it,” Jones wrote.

So what’s next for Jones? He says he wants to be involved in the game from the sidelines.

“My whole life I’ve wanted to be a coach and this is the dream I’m going to pursue,” he wrote.

This is another twist in Jones’ story.

His mother suffers from a rare autoimmune disprder called neuromyelitis that attacks the optic nerve and spinal cord. It has taken her vision and paralyzed her, but she is still alive more than four years after being told she had three months to live. He told TampaBay.com his mother’s sickness gave him a different outlook on the pains he went through as a football player.

“If I bump my toe or something, I can’t sit here and complain about it,” Jones said. “It helps me out. My mother’s in the hospital, can’t even move right now, but every time I go, she’s still smiling. No matter what adversity I hit, on this football field or off, I have to keep a smile on my face.”

He decided to transfer from JSU after his freshman season before ultimately returning and becoming one of the best defenders in the SWAC.

Perhaps he will give football another chance, as he was obviously frustrated with the draft process and perhaps disenchanted with the business side of the game. Then again, he may be at peace with his decision and ready to put his newly awarded education degree to use. Either way, we wish him well.