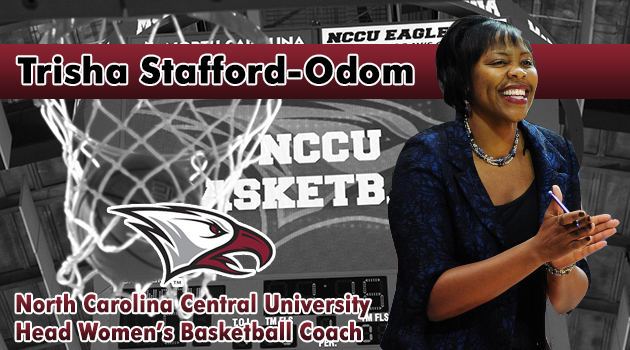 North Carolina Central’s men’s basketball program has become one of the most consistent programs in HBCU hoops over the last few years. The women’s program has been consistently bad, winning just 20 games in the last three seasons.

Looking to turn the women’s program around, NCCU has hired former WNBA player and Division I assistant Trisha Stafford-Odom as its new head coach. She told the media on Monday she doesn’t intend for her program to be the “weak counterpart.”

“I wouldn’t get on a plane and pack up and move if that wasn’t the goal,” she said.

Stafford-Odom previously coached in the Triangle as an assistant for Duke and North Carolina.

“We are definitely not strangers to Durham, North Carolina,” Stafford-Odom said of her family at her introduction. “It’s the opposite coast for us, but we made it home several years ago. We are onto new and greater things by being at NCCU.”

A hoops legend at the University of California-Berkley, Stafford-Odom played in the WNBA as well as the ABL. She’s the second former WNBA player to be named coach of an HBCU in less than a week, as Clark Atlanta hired former WNBA champ Yolanda Moore last week.

“Her varied coaching and playing experiences in collegiate and professional sports will definitely help move our women’s basketball program to the next level,” NCCU AD Dr. Ingrid Wicker McCree said. “These experiences will enable her to recruit the best scholar-athletes and provide them with the tools and quality coaching necessary to win championships.”