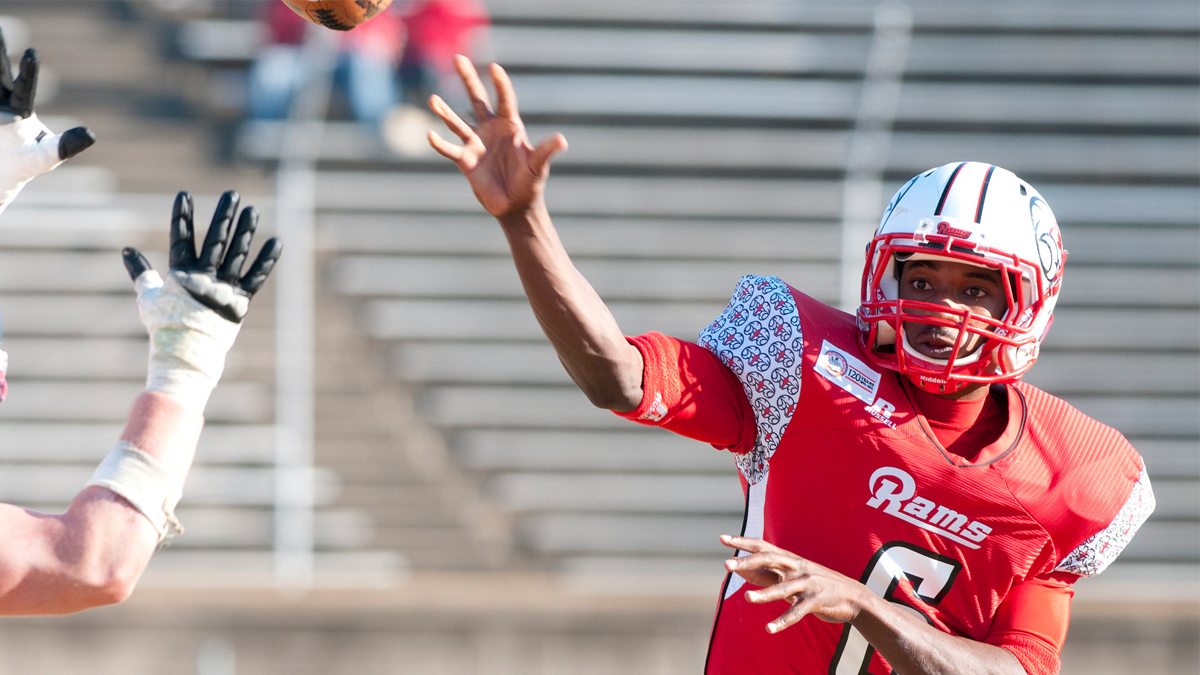 After his team’s second round win over Shippensburg, Winston-Salem State coach Connell Maynor said his team had the best defense in Division II. The way his defense came up big in the fourth quarter of WSSU’s 21-17 win over Indiana University of Pennsylvania, he may not get many arguments.

Clinging to a four point lead with less than a minute remaining, WSSU came up with four big stops inside their own 10 yard line to slip past IUP and into the Division II semifinals for the second year in a row. The Rams will play West Texas A&M on Dec. 8. The game will be played at Bowman Gray Stadium in Winston-Salem at 6:30. It will be televised on ESPN 3.

“It really gave us a test,” said Ram linebacker Khendra Reid. “But coach told us to keep playing our game and don’t look at the clock because we can’t control the clock or the offense, but if we played our game we could win.”

It was a nail-bitting finish to an exciting game that featured blocked kicks, ejections and a hail mary.

The Rams and the Crimson Hawks were tied at 7 with one second remaining in the first half when Anthony Carrothers connected with Kenny Patterson on a 64 yard pass that gave WSSU a 14-7 halftime edge.

“I had to buy some time by escaping the pocket,” Carrothers said. “Our guy came up with a huge play. It was definitely a momentum changer.”

One of the game’s key moments occurred about midway through the fourth quarter when Maynor decided to bench Carrothers in favor of Kam Smith. Smith, the Rams top quarterback, had not taken a snap since the CIAA championship game on Nov. 10.

According to Maynor, Carrothers shoulder began bothering him, which was part of the reason for the switch, but not totally.

“He played good for three quarters, but he did miss some reads,” Connell said of Carrothers. “I just felt that the team needed a boost. I knew if we put Smith in, that would get the crowd in the game. It would pick everybody up and give us a shot in the arm.”

Smith’s peeled off the rust on his first drive, and then came to life on his second. He connected on four of five passes for 30 yards, but including a one-yard touchdown pass to Ricky Rozier.

“I just had to get back into the flow of the game,” Smith said.

IUP got the ball with 3:51 remaining. They converted a 4th down in their own territory and continued marching toward the endzone. WSSU managed to regain its composure, forcing another fourth down and batting the ball away from IUP quarterback Mike Box with 30 seconds remaining.

The win means that WSSU is one game away from a shot at a national title for the second year in a row. WSSU advanced to the national semifinals last year before being beaten by Wayne State.

Maynor said that despite what anyone outside of his team may have thought, his players remained confident in their ability to win.

“I don’t think one of our guys ever believed we were going to lose this game,” Maynor said. “I think that was key for them to execute down the stretch the way they did, offensively and defensively.”