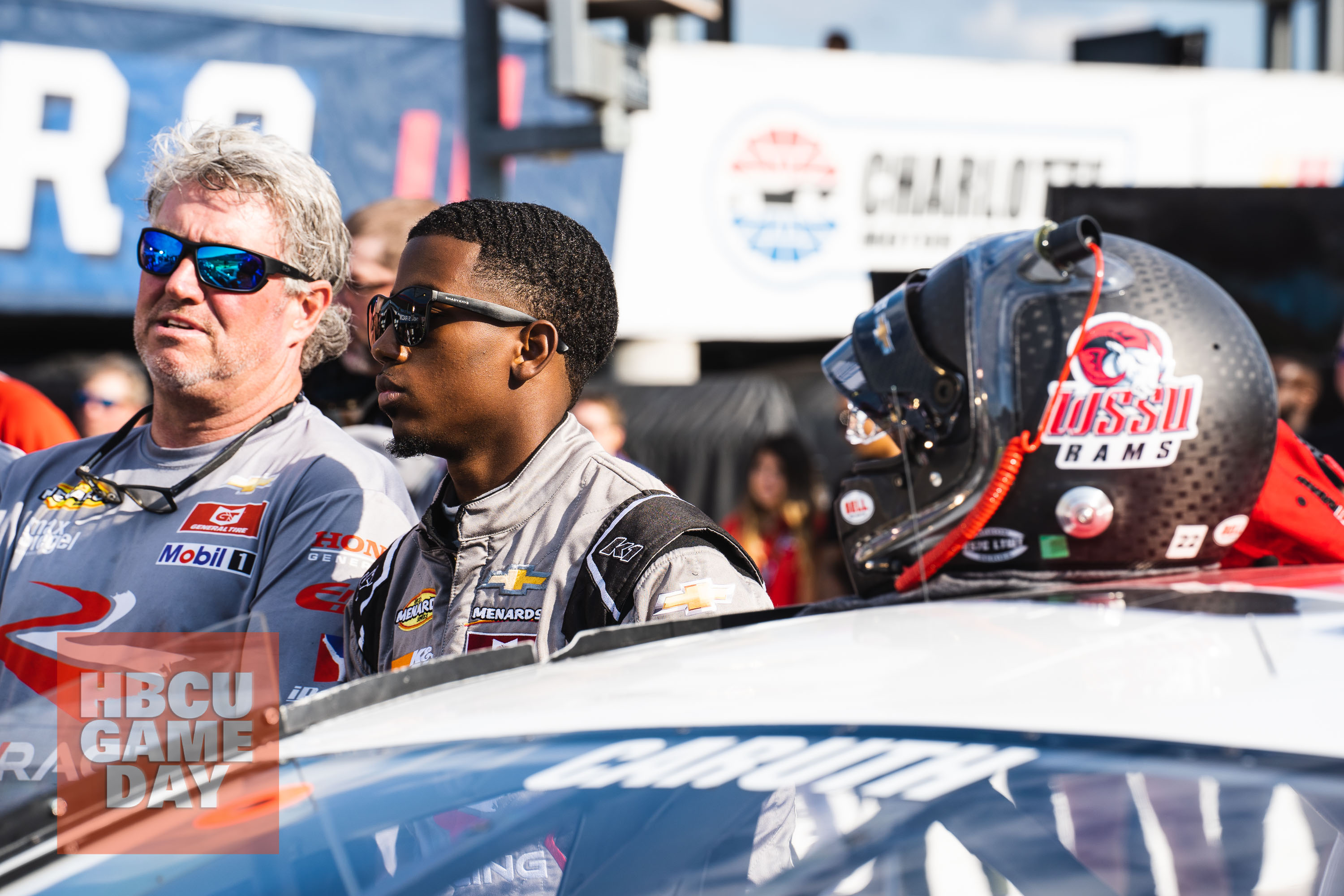 CONCORD, NC (Dec. 6th, 2022) – Tuesday, at the Chevrolet Performance Center, GMS Racing announced its newest driver to the fold, as standout talent Rajah Caruth officially joins the team to drive the No. 24 Chevrolet in the 2023 NASCAR Craftsman Truck Series season.

Coming off a busy year on track, Caruth put his focus primarily on the ARCA Menards Series, where he raced for the championship. In his first full-time season of ARCA competition, Caruth was able to collect eight top-fives, 14 top-10’s, and would finish third in the points standings, right behind fellow GMS Racing teammate, Daniel Dye.

In addition to his full year of ARCA racing, Caruth would also showcase his abilities by making select starts in the NASCAR Xfinity Series and Truck Series, gaining some valuable experience at several tracks that he will be returning to in this upcoming season. Rajah’s best finishes in the two national series were a 12th place result at Martinsville and an 11th place result at World Wide Technology Raceway, respectively.

“I am extremely honored, and really excited to join GMS Racing and be in the fold of a professional race team with so much history. I’ve been waiting for an opportunity like this throughout my whole career, and I’m going to do the best in my power to make the most of it. First and foremost, I can’t thank everybody at GMS enough for believing in me and believing that I have what it takes to drive one of their trucks. Same goes for everybody at Chevrolet for their support, we truly wouldn’t be able to make this happen without them. Specifically, I wanted to thank the Steward and Scott families as well, for their belief in my family and I, not just academically, but they have played a huge role in my career as well. Lastly, I have to thank my family – my mom, my dad, and my little sister; I have the greatest support system there is, and they all help me so much. Next year is going to be a pivotal point in not just my career, but my life as a whole, and I can’t wait to show everyone what we’re capable of.” exclaimed Rajah.

Growing up in Washington, D.C., Rajah found a passion in racing at a young age. Starting with sim racing on the iRacing platform, many began to take note of his talents, including the NASCAR Drive For Diversity program, which invited him to compete in their annual combine at just 16 years old. Caruth impressed in many aspects during his audition, and was selected to drive for Rev Racing for starts in US Legends Cars, Late Models, ARCA Menards Series East, and most recently the ARCA Menards Series national tour. Caruth joins an extensive list of alumni from the NASCAR Drive For Diversity program, including top NASCAR Cup Series prospects such as Bubba Wallace, Kyle Larson, and Daniel Suarez.

GMS Racing Team President, Mike Beam, sings high praises for the 20-year-old, stating “We are truly excited to welcome Rajah to our team next year. I’ve studied up on him ever since I saw him racing in ARCA, but I know that he’s been on the radar for many people in the industry for quite some time now. It was fun to watch him and Daniel fight for the championship last year, and I think having both of them make the jump up to the Truck Series will be a benefit, because they will both be able to learn together. Rajah’s a sharp kid; I’ve seen his work ethic and attention to detail he brings to the racetrack, and I can tell that he’s hungry. He just started driving a few years ago, so to see how far he’s been able to grow in such a short amount of time has been pretty remarkable. He’s built himself a good name in the garage area and is someone that people like to be around, so he’ll be able to soak up some mentorship lessons from experienced drivers, which should go a long way. I’m excited for him.”

Serving as Caruth’s primary partner for the 2023 campaign will be the Wendell Scott Foundation, which was inspired by NASCAR Hall Of Fame inductee, Wendell Scott, Sr. The Foundation aims to provide resources and services to underprivileged African-American youth communities near Scott’s hometown of Danville, Virginia. Since its formation in 2011, over 25 students have been awarded more than $50,000 from the Wendell Scott Legacy Scholarship programs. This partnership is one of great personal meaning to Rajah, who was the recipient of the Wendell Scott Trailblazer Award in 2021 for being an outstanding diverse ambassador for the sport; highlighting his performance, sportsmanship, and community service efforts.

As one of the rising stars in the Chevrolet camp, Rajah has also been named as the newest addition to Drivers Edge Development, which was formed by GMS Racing and JR Motorsports in 2019. The Drivers Edge Development program aims at bolstering young talent’s careers by providing competition & marketing resources from the winningest OEM in NASCAR history.

“We are excited for Rajah to compete full-time with GMS Racing in the NASCAR Craftsman Truck Series in 2023,” said Dayne Pierantoni, GM Racing Program Manager for the NASCAR Craftsman Truck Series. “Through Chevrolet’s partnership with Rev Racing, we have been impressed with Rajah’s talent both on and off the track. He has proven his ability to compete at the NASCAR national level and we look forward to seeing his continued success with a series championship winning team.”

This announcement thus solidifies GMS Racing’s full-time lineup for the 2023 NASCAR Craftsman Truck Series season. Rajah Caruth will join Grant Enfinger and Daniel Dye in a trio of teammates as they collectively work to add to the team’s storied legacy. Further announcements, including additional partners and key personnel on Caruth’s No. 24 team, will be released in the near future.