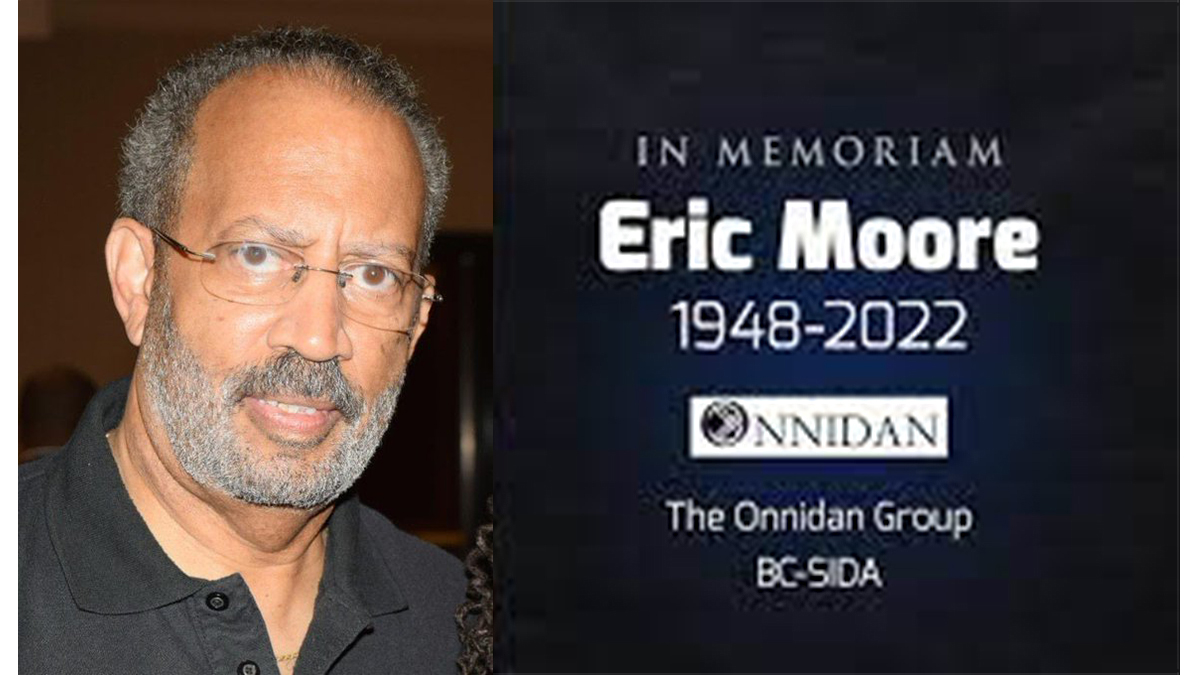 The funeral service for HBCU pioneer Eric Moore will be held this Wednesday at 1 p.m. at the Ebenezer United Methodist Chuck in Raleigh, N.C. The service will also be livestreamed.

The homegoing service for Eric Moore will be held on Wednesday, November 9, 2022 at Ebenezer United Methodist Church. The church is located at 6020 Rock Quarry Road, Raleigh, NC. The viewing will begin at 12 noon with the service starting at 1 p.m.

Growing up in and around Durham’s Black community of businesses and professionals afforded Eric the opportunity for validation and inspiration. He attended and graduated from Hillside High School in 1966 as the valedictorian of his class. Eric also served as the drum major of  the Hillside band. He was awarded a certificate conferred by the State of North Carolina recognizing his work as the statistician for the Hillside High School “Pony Express.” The Hillside team was a high-scoring basketball squad that gained statewide and national acclaim for its scoring prowess.

In 1970, Eric earned his Bachelor of Arts in Speech and Communications with a minor in Engineering from North Carolina State University. While at NC State, he was elected as president of the Student Senate and was a member of the NCSU Golden Chain. In 1968, he became a member of the Alpha Phi Alpha Fraternity at the Beta Rho Chapter at Shaw University. He was also founding member of the Eta Omicron Chapter of the fraternity at NC State in 1970. Eric developed his love of teaching at Ohio University while earning his Master of Arts in Communications degree.

Eric Moore: In the Military and at Fayetteville State

Eric spent four years in the United States Air Force rising to the rank of captain. He managed radio stations overseas among other duties. After his military service, he was employed as a radio station manager in multiple markets on the East Coast for several years. After which, he began a 21-year career as a communications director and professor of communications at Fayetteville State University. At FSU, he also served as the Sports Information Director.

Drawing from his background in compiling statistics, Eric saw a need for communicating Historically Black Colleges and Universities (HBCU) scores, news, and computerized statistical services. These needs inspired him to create The Onnidan Group. Under the umbrella of The Onnidan Group, Eric created an HBCU sports news website at Onnidan’s
Black College Sports Online, online at onnidan.com. It was the first major outlet, and for many years the only site for comprehensive coverage of HBCU sports on the internet. In many ways, it helped birth the explosion of HBCU coverage that now is available at multiple sites on the internet and other media.

The Onnidan Group and Onnidan.com

Some of his other accolades include working  as a basketball and baseball official on both the high school and college levels. He was one of the founders and served as Executive Director of the Black College Sports Information Directors Association (BC-SIDA). In that capacity, he organized African American and HBCU SIDs from across the country and facilitated greater participation and training in their profession. From his position in BC-SIDA, he developed trusting and lasting relationships with countless number of Sports Information Directors and media professionals and served as a mentor to numerous young people pursuing careers in college and professional sports.

Citing his long-time service to the conference in a variety of capacities, he was inducted in 2019 into the Central Intercollegiate Athletic Conference’s (CIAA) John McLendon Hall of Fame. He was especially proud and humbled by this honor.

Eric leaves to cherish his memory, his wife, Dr. Betty (BJ) Eugenia Jones Moore, a daughter, Nichelle Irene Moore, a son, Douglass Malik Moore, and a daughter-in-law, Alisha Zakia Brown Moore. Eric was preceded in death by his granddaughter, Christina Simone Moore, in which he had an incredibly special bond and loved unconditionally. His grandchildren are Brianna Nicole Moore and Ethan Douglass Moore, of which he was incredibly proud. He leaves his beloved aunt Dr. Soraya Moore Coley (Ronald) of Pomona, California and a host of other relatives and loved friends.Moo