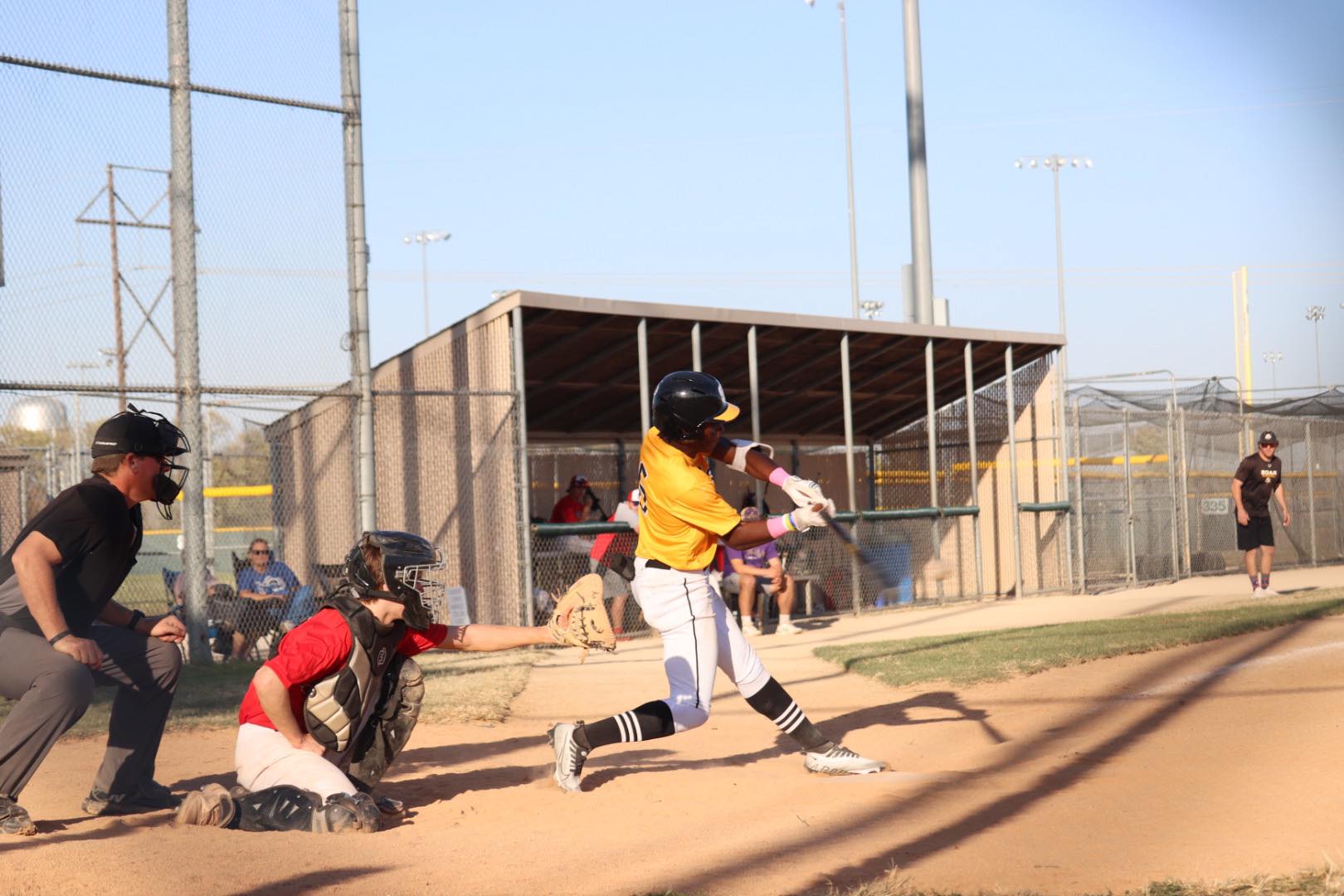 World Series, MLB not the goal of baseball program for Black kids

This year’s World Series has a total of zero African-American players.

Chris Evans runs a program designed to develop young Black kids into good baseball players through fundamentals, community and family, but the Morehouse alum says he has a higher goal than grooming future major leaguers.

“We want to build the excitement about baseball, but at no time do I stress the major leagues to the kids,” Evans says. “If some of them blossom and get there, that’s one thing. But for me, it’s the experience leading up and giving them a structure through elementary school, junior high, high school, giving them some type of foundation.”

Evans is the founder and executive director of I Am King Foundation, a Kansas City organization which provides opportunities for baseball and to teach life skills. It exists in a time during which fewer Black baseball players are on MLB rosters, and in the midst of the 2022 World Series, where there will be no American-born Black players in the dugout for either the Philadelphia Phillies or the Houston Astros.

THE LAST TIME IT HAPPENED

Not since 1950, three years after Jackie Robinson joined the Brooklyn Dodgers and broke baseball’s color barrier, has there been a World Series without any U.S.-born Black players. The upcoming Series will have some diversity in that both teams have a number of Latin-born players.

Both teams have storied histories that include Black players, such as Dick Allen, Garry Maddox and Gary Matthews, to name a few Phillies. There were Jim Wynn, Joe Morgan and J.R. Richard with the Astros, and all the names course through the ’60’s, ’70’s, and ’80’s.

The Associated Press reported that the Phillies had no Black players on their opening roster this year for the first time since 1959. Roman Quinn, a Black backup outfielder, played 23 games before being released. Power-hitting rookie Darick Hall made his debut in late June and played 41 games — his mother is white and his father is Black and white, and he identifies as multiracial. Hall wasn’t on the Phillies’ roster for any of the first three rounds this postseason and isn’t expected to be on the World Series roster.

Houston lost in the World Series last year with Michael Brantley, a Black outfielder, on the roster. Brantley is out for the season this year because of a shoulder injury. Relief pitcher Josh James is also Black and on the team’s 40-man roster, but he had arm surgery in early October, the AP reported.

According to a University of Central Florida study in 2011, more minorities and women are running Major League Baseball and its teams, but the number of African-Americans playing the sport continues to drop. The annual report card issued by Richard Lapchick, director of UCF’s Institute for Diversity and Ethics in Sport, showed that African-American players made up 8.5% of that season’s opening day rosters, a decline from 10 percent in the previous season and the third-lowest percentage in decades.

In the latest study, Lapchick said Black players made up 7.2% of opening day rosters this season, falling from 7.6% last year. It marks the lowest percentage since the initial study in 1991, when 18% of MLB players were Black.

The dwindling number of Black players was not lost on one of Evans’ sons as they watched the hometown Royals, in their 2015 run to the World Series. He was 10 years old at the time and noticed that while players were being interviewed, something was missing.

“And my son said to me, he was like, ‘Daddy, he doesn’t speak English, either.’ No, none of the Black players speak English. And he was crushed, Evans says. “Like, he’s been watching what he thought were Black players. You know, he wasn’t really thinking about their names. We thought these guys were like him. And then they have an interpreter or they barely speak English. Like I can see a piece of him crushed.”

Given the demographic of this year’s World Series, Evans isn’t banking on Black kids tuning in to any of the games.

I imagine, it may not even be a big enough number to register, but the numbers will be low of Black kids watching the World Series. When Mookie Betts did more for the World Series, and they definitely give him credit, everybody’s watching just to watch Mookie,” Evans says.”And there is Mookie Betts was the MVP. Like, how did he not get it?”

In 2020, Betts was the only U.S.-born Black player in the World Series. Teammate Corey Seager won the MVP award.

I AM KING TAKES OFF

Evans says I Am King began as a game of T-ball for his two sons, and notes that he had too beg parents to join him in his venture. Two years later, he had two T-ball teams and two 8-year-old teams. Baseball was the focus, but Evans, who didn’t play baseball at Morehouse, had different motivations.

“And so, we use baseball as a platform to teach them to be community leaders. So we pretty much work with them year-round. We have some special programs.”

Evans is borrowing from his time at Morehouse to sculpt his program.

“Same mentality of the Brotherhood,” he says.”But that’s kind of the mentality that I raised them all with, you know, having some community service, making sure you stay on top of your books, making sure you’re respectful and you understand how have a healthy relationship with women or with your mom. I don’t know if it’s coaching, but it’s not coaching. But you really care about the kids.

One of the programs involves working with the Kansas City Police Department in a one-day camp where Black kids interact with officers at various stations. There’s also a classroom session in which kids describe different scenarios which have involved police, Evans says.

Their biggest fundraiser, he says, is Mother-Son Days, when 13- and 14-year-old put on suits and ties and their moms get into evening gowns for a night of dinner and dancing. Evans has also taken an all-Black team to Cooperstown, home of the Baseball Hall of Fame.

“But it’s like a rite of passage for 12-year-olds that are into baseball. So doing that, everybody was blown away,” he says. “People have managed Cooperstown, the umpire like ‘Wow, how did you come together and bring an all-Black team?”

Being the sole Black team in a tournament is also a teaching moment, according to Evans.

“I think that putting young Black boys, young Black men, in all-white environments, in their confident in their comfortable is a huge life lesson,” he says. “You know, whether it’s the board room, the bank, wherever it is that they’ll go in life, and they’re the only one, they’ll still have that baseball confidence of, ‘Hey, I belong here.'”

NOT ALWAYS ABOUT THE MONEY

Evans is making his appeal to kids who could easily be lured to football or basketball with the idea that they’ll make it to the National Football League or the National Basketball Association. He says one factor that siphons kids away is that they move from playing with friends with the foundation to a new group they might not know.

“Because it’s been fun, and it;”s been competitive. But now, I’m playing with a bunch of strangers,” he says. “And that’s what I’m seeing happening as these kids get to high school is the brand of baseball that they’ve played growing up is non-existent.”

Then, there’s the money. Playing baseball isn’t cheap, as opposed to simply buying a pair of basketball shoes or football cleats. Evans says he hasn’t lost anyone because of the cost, but the reason he has lost parents is a little disheartening.

THE WORLD SERIES IS AN OPTION, OR A DREAM

Until recently, John Randle was switching between football and fall baseball. He had a Friday night football game followed by a baseball game the next day. But he’s decided that he will focus on baseball with an eye on going to the majors and playing in a World Series, and he thinks more Black kids should follow that path.

“But I want to be a positive role model for the younger Black kids. I volunteered and I helped coach and I love being the only Black coach there because I never had a Black coach to look over me and coach me when I’m playing,” he says, adding that he’s got friends who have said they will join him in the spring. “So being a positive role model for them is hopefully allowing them to get a love for the game and enjoy it.”

Kia Richardson says her son is aware that the majors aren’t crowded with Blacks, much like there aren’t many who look like him in high school. .

“He notices, and it matters to him,” Richardson says of the lack of Blacks in Major League Baseball and even on the teams he faces. “We’ve had some racial incidents while he was playing, but he’s not discouraged. He still loves the game and he’s still determined to continue playing to the highest level that he can play.”

Randal Bigelow, who is a big Mookie Betts fan, has already enrolled at Belmont Abbey College, just west of Charlotte. During part of his youth baseball career and much of his high school games in Durham, North Carolina, Bigelow had Black players around him. Going to the majors would be nice, says his mother, Andrea Bigelow, but it’s not his biggest goal.

“I guess a lot of kids who like baseball, their dream is to go to the MLB,” she says. “But I don’t think he would be opposed to coaching at other levels, high school, college or what have you. But he’s all in. He wants baseball to be his career, whether that means playing, coaching, whatever baseball is.”

World Series, MLB not the goal of baseball program for Black kids