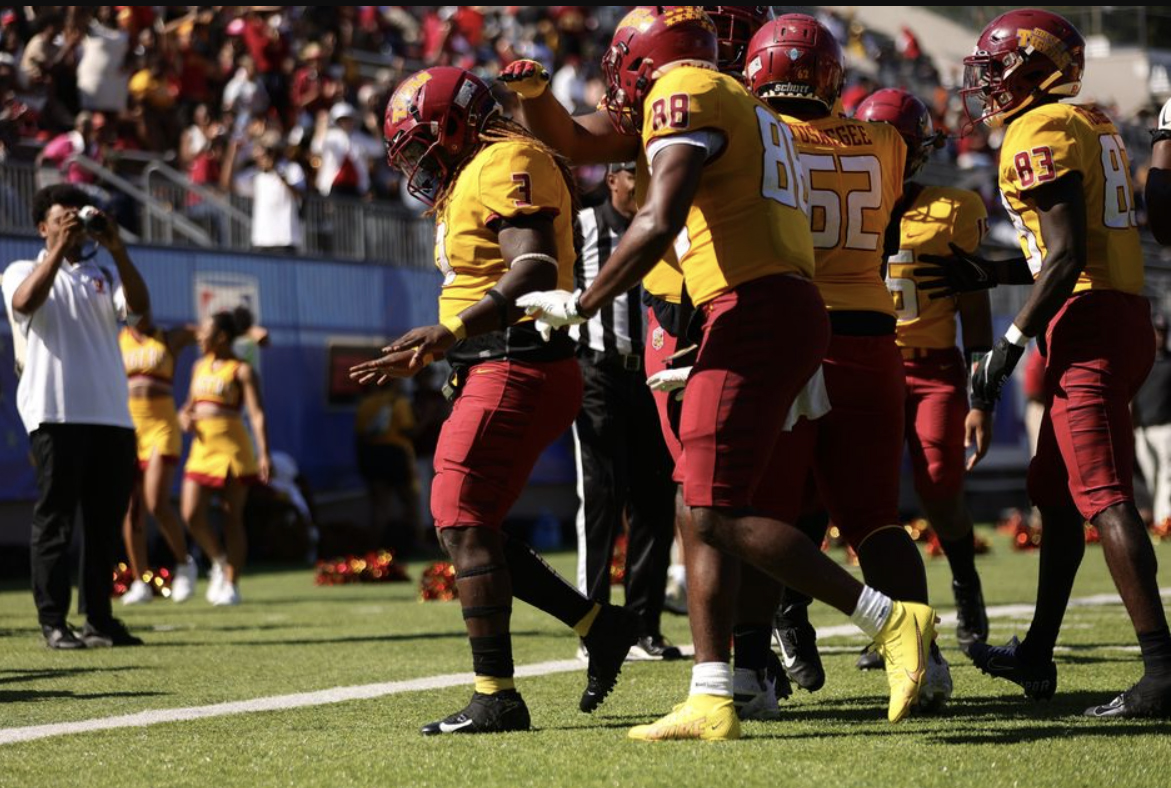 Allen pushes Tuskegee before the Golden Tigers come through with the SIAC victory.

MONTGOMERY, Ala. – In their home and conference opener, Tuskegee won a high-scoring matchup, 35-27, against Allen in SIAC play. The Golden Tigers (2-2, 1-0 SIAC) led for the entirety of the game after jumping out to an early lead in the first quarter with a pair of quick scores despite trailing the Yellow Jackets in total offense as well time of possession.

After three-and-outs to start the game from both teams, a special teams penalty gave Tuskegee possession at the Allen 17-yard line, giving way for Taurean Taylor (Scottdale, Ga.) to rush for a touchdown on the first play of the drive.

Two plays later with the Golden Tigers kicking off, Allen fumbled on the return and newcomer Anthony Scott (Montgomery, Ala.) came up with the recovery to give Tuskegee great field position again, this time inside the 10-yard line. Bryson Williams (Lithonia, Ga.) found tight end Deondre Harvey (Douglasville, Ga.) for the score two plays later to put the Golden Tigers up 14-0 just under four minutes into the game.

After a 12-play 66-yard scoring drive from Allen to cut down the lead, Williams led another successful scoring drive for Tuskegee, this time capping a six-play drive by calling his own number for a two-yard rushing touchdown.

The Yellow Jackets responded again in the second quarter, taking up just over four minutes of action with a nine-play drive with a touchdown pass to make the 21-14, a score that would remain the same until both teams added touchdowns before the half, as they entered the locker rooms with Tuskegee holding a 28-21 lead.

The Golden Tigers regained a two-score lead with just under ten minutes to go in the third, with Donte Edwards scoring from 11 yards out to put Tuskegee up 35-21. Allen scored later in the quarter on a 30-yard pass; however, neither team scored again in the contest.

Williams led Tuskegee offensively, gaining 119 yards and two touchdowns through the air on 6-for-13 passing, along with rushing for 23 yards and a touchdown. The Golden Tigers rushed for 111 yards as a team on 35 attempts for 3.2 yards per rush.

David Wright led the offense for Allen, going 31-for-51 for 373 yards and three touchdowns through the air, while Beau Herrington gained nearly 100 yards on the ground, finishing the day with 91 yards on 15 carries.