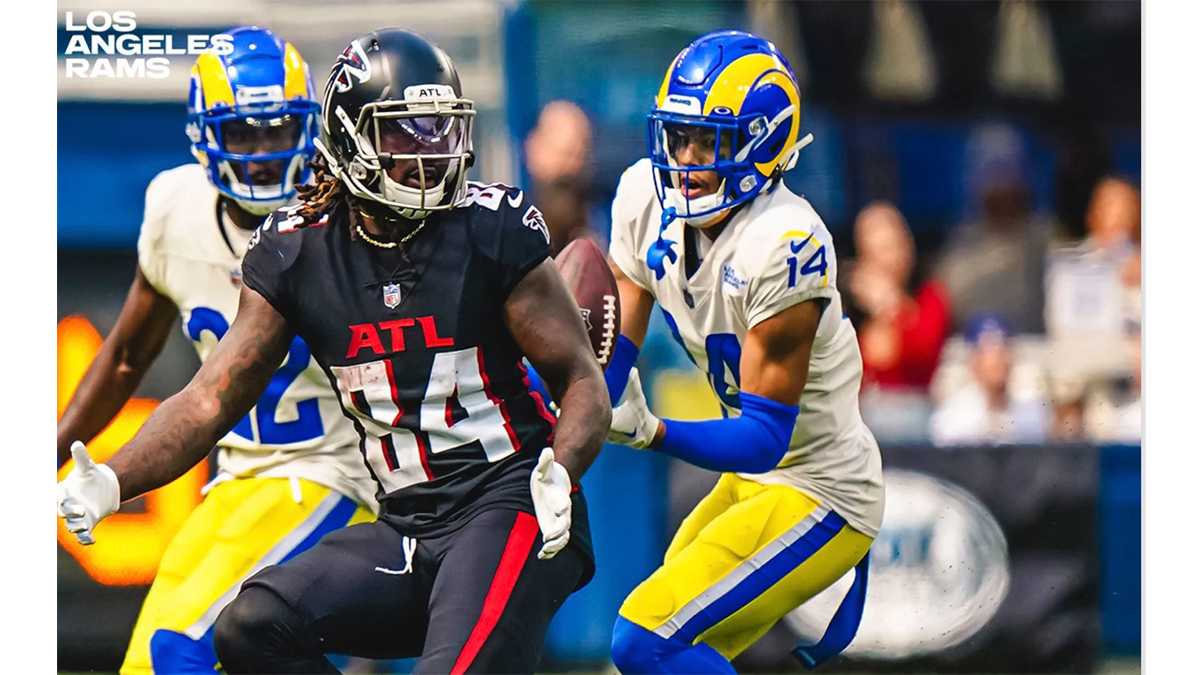 Los Angeles rookie Cobie Durant (#14) out of SC State had his first extensive action and he made the most of it with an interception and sack in the Rams win over Atlanta. “He did his thing,” teammate Nick Scott said of Durant.

Week Two for HBCU NFL players turned out to be a splash debut for LA Rams’ rookie defensive back Decobie “Cobie” Durant. It was also a productive week for veteran wideout Khadarel Hodge of Atlanta.

Durant, a SC State product, made two ‘splash plays’ in the Rams’ win over Atlanta.

He grabbed his first career interception in the second quarter and got his first career sack in the third period. Both came at the expense of Atlanta QB Marcus Mariota during the Rams 31-27 win over the Falcons Sunday in Inglewood, Ca.

The interception was returned 51 yards down to the Atlanta 7 where Durant was tackled by Mariota and an Atlanta lineman. The Rams scored a TD three plays later.

The sack, off a corner blitz, was reminiscent of his takedown of Jackson State QB Shedeur Sanders in the 2021 Celebration Bowl. This one went for -7 yards and resulted in an Atlanta punt. For the day, Durant totaled just two tackles but the ‘splash’ plays earned him this week’s defensive player of the week honors.

See video of the sack, here.

Durant “made a memorable first impression in training camp and the preseason with both his fearless playmaking and his outgoing personality,” said Rams’ staff writer Stu Jackson in his story Sunday about the rookie’s exploits.

The rookie got into the Falcons’ game after cornerback Troy Hill left the game early with a groin injury. In the Rams’ opening week loss to Buffalo, Durant had only played on special teams.

The pick and the sack both had a tangible impact overall on the Rams defense, Jackson said.

“Man, it keeps the energy up,” safety Nick Scott told theRams.com. “I mean, we’re extremely proud of him because we know what he’s capable of. We were a little excited seeing him come in the game, making his first couple of snaps. And he did his thing. He held his own. There’s no drop off. So we’re proud of him. We’re excited for what he’s gonna do the rest of the season and his entire career.”

Durant was not the only former HBCU player to stand out in the Rams vs. Falcons game.

Khadarel Hodge, a fifth-year wide receiver out of Prairie View A&M, had two catches in the game in three targets for 57 yards. Hodge had a long reception of 39 yards that he pulled in in the second quarter. It led to Atlanta’s first points, a 26-yard field goal.

His 18-yard reception in the third quarter was part of an 8-play, 72-yard drive that culminated in an Atlanta touchdown. The score pulled Atlanta to within 31-17.

– #14 COBIE DURANT, CB, LA Rams (1st season, SOUTH CAROLINA STATE) – In Rams’ 31-27 win over Atlanta, Durant had two tackles on defense, one blind side sack for -7 yards of Falcons’ QB Marcus Mariota, one pass defended  and one interception he returned 51 yards to the Atlanta 7-yard line. Durant got in for 23 defensive snaps (38%) and nine special teams’ snaps (39%).

– # 97 JAVON HARGRAVE, DT, Philadelphia (7th season, SOUTH CAROLINA STATE) – Started at defensive tackle for the Eagles in 24-7 win over Minnesota finishing with one assisted tackle and one hit on the quarterback. Hargrave was in on 38 plays on defense (62%).

– #23 TRENTON CANNON, RB/KR, Tennessee (5th season, VIRGINIA STATE) – Cannon injured his knee without returning the kick on the opening kickoff vs. Buffalo Monday. The Titans lost to the Bills 41-7. Cannon stayed on the ground after the Bills fielded the opening kickoff, which ended up as a touchback on the first action of the game.