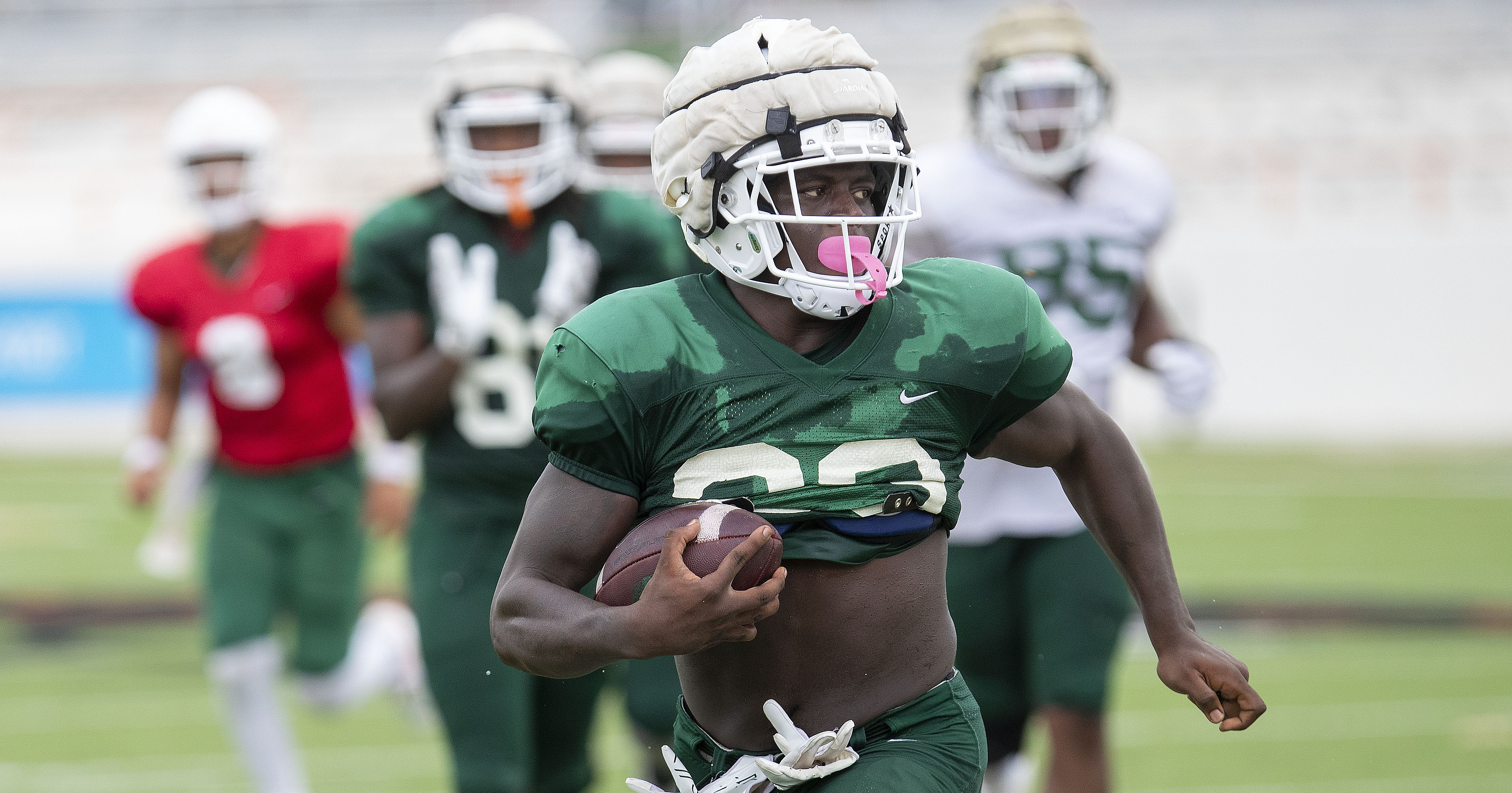 Florida A&M is working out the kinks on offense as it prepares to make its 2022 debut against UNC in two weeks.

TALLAHASSEE, FL — Someone forgot to tell Florida A&M wide receiver Xavier Smith that the season hasn’t officially started.  The senior All-American was in mid-season form making plays all over the field during Saturday’s intra-squad scrimmage.  He was airborne catching passes over the middle and running virtually unguardable routes in front of his teammates, select fans and NFL scouts including the Oakland Raiders.

The scrimmage from the onset was dominated by the Rattler defense.  Head coach Willie Simmons hopes this talented group could be as dominant as last year’s Top 10 defense.

“I thought the defense started really really fast,” Simmons said. “At the beginning of the scrimmage there were a lot of three-and-outs, high-intensity plays and tackles-for-loss like they’ve been doing for the last few seasons.  It’s good to see them continue to do that.”

FAMU’s defensive line and linebacking crops were fast to the ball.  The secondary, anchored by preseason All-SWAC defensive back DJ Bohler, was stingy.  A steady rotation of linebackers and defensive backs displayed the depth to which the defense has built up since last season.

Offensively, Jeremy Moussa ran with the first-team offense for most of the scrimmage as first-string quarterback Rasean McKay took the scrimmage off to allow Simmons and staff to evaluate the stable of backups.  Resdhirt sophomore Cameron Sapp also had a solid scrimmage.  His accuracy was on display in a couple of scoring drives. Junior Muratovic, Jacory Jordan and Trey Fisher all got snaps on Saturday.

Simmons says he is pleased with the emerging escalation in quarterback play.

“I thought once we got settled in and got the ball closer to the endzone…we were able to put some touchdowns together. It was good to see the big play-making ability that we have.  Once the quarterbacks got settled down they made some throws,” said Simmons.

Smith would catch a short route and use his explosive speed to weave through the secondary for a touchdown in one of the aforementioned big plays.  Smith would come back on the next drive and make an over-the-shoulder catch amid three defenders.  It was vintage “Zay” and it excited the Rattler sideline.

Florida A&M running back Terrell Jennings continues to excel at RB1.  He shaped his large physique to a more streamlined look without losing too much mass.  What has resulted is a much more confident Jennings that appears to be ready to have his breakout season.  The offense successfully established the run game which opened up passing lanes in 2021.

Simmons is zoning on FAMU’s season opener against the University of North Carolina in Chapel Hill, NC.

“Now that we’re done with our scrimmages the focus now is to try to solidify who the travel squad will be and getting those guys prepared,” Simmons said. “We have a few more days of training camp, but our focus is shifting to North Carolina.”