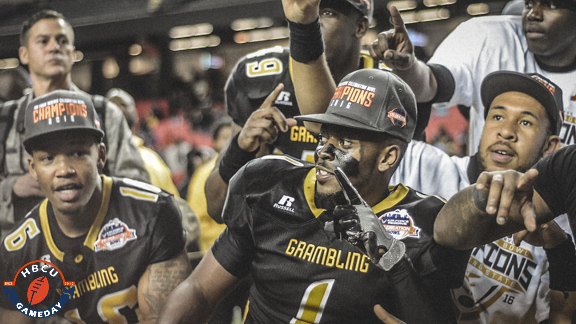 Devante Kincade back at Grambling as quarterbacks coach

One of the most dynamic HBCU quarterbacks of recent memory has returned to the sidelines for his alma mater.

One of the most dynamic HBCU quarterbacks of recent memory has returned to the sidelines for his alma mater.

After graduating with a bachelor’s degree in 2018, Devante Kincade returns to Grambling to begin his first season as quarterbacks coach under first year head coach Hue Jackson.

Kincade, who was the first Southwestern Athletic Conference (SWAC) student-athlete to earn Player of the Week five consecutive weeks, guided the Tigers to back-to-back SWAC Championships and Celebration Bowl appearances.

In his junior season, Kincade went 219 of 342 passing, with 31 touchdown passes and just four interceptions in 2016. In addition, he threw for 2,999 yards as Grambling State defeated Alcorn State in the SWAC Championship game and North Carolina Central to win the Celebration Bowl.

In his two seasons as Grambling quarterback, Kincade earned back-to-back Bayou Classic MVPs, All-SWAC First Team and SWAC Offensive MVP honors. He also was a two-time recipient of the Big Ben Award, the 2016 SBN Doug Williams Offensive Player of the Year honor, the 2016 SWAC Newcomer of the Year and a Walter Payton Finalist.

While at Skyline, Kincade played basketball and football. On the football field, he helped the team to a 22-3 record, with 37 touchdowns, eight interceptions and 3,270 yards as a junior. He added 131 rushes for 857 yards and 17 scores on the ground. In addition, he was voted the 9-5A Offensive MVP following the season, as well as second team All State.

Devante Kincade back at Grambling as quarterbacks coach