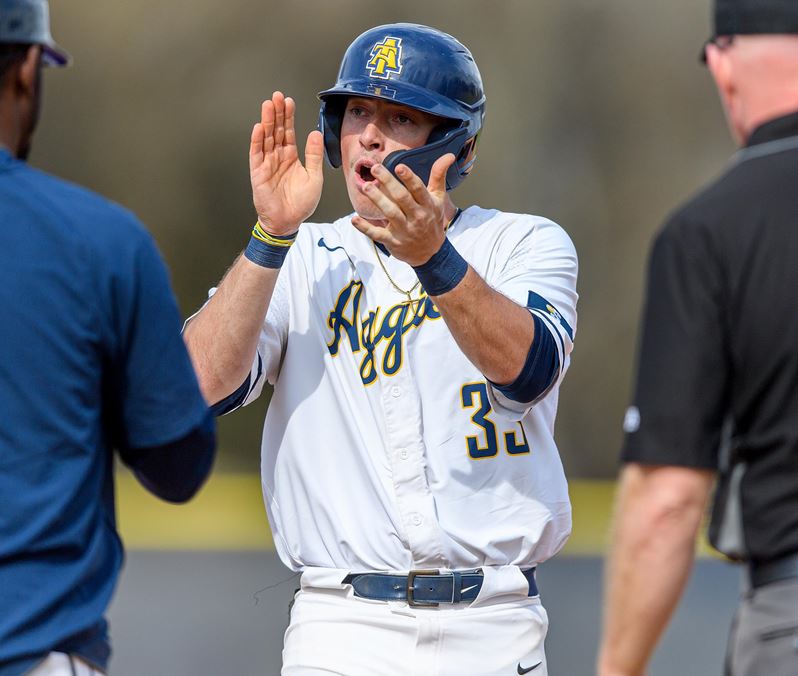 NC A&T did something on Tuesday it hasn’t done since 1993, knocking off the University of North Carolina on the baseball diamond in Chapel Hill.

The win marked the second time in A&T baseball program history the Aggies defeated the Tar Heels. Previously, A&T’s only win over UNC occurred on April 6, 1993. The Aggies improve to 12-19 overall and become the first non-ACC school to beat the Tar Heels at home this season.

“I’m just so proud of our players,” said A&T coach Ben Hall. “We’ve been in a tough stretch recently, not playing the way we want to play. Sometimes when you’re in stretches like that where everybody’s frustrated, you press in certain scenarios and don’t pull yourself out of it. Everybody did a great job. This is an outstanding team win.”

A&T led 6-5 with two outs in the visitor’s seventh when graduate infielder Alec Seatonstepped to the plate with runners on first and second. He sliced a single up the middle and. Fortunately for A&T, sophomore Xavier Bussey was the runner on second. Bussey got on his horse to beat the throw home to give the Aggies a two-run cushion, 7-5.

That wasn’t the last time Bussey’s speed benefited the Aggies.

In the home seventh, Tar Heel second baseman Mikey Madej lined a ball toward right center field that looked like an extra-base hit. That is until Bussey started running down the liner. He went into a dead sprint toward the right center wall, stretched out his arm as far as his arm allowed, and made an incredible catch to keep a runner out of scoring position.

“(UNC) can drive the baseball, so you have to be out there ready to make a play,” said Hall. “Probably the biggest play of the game was Bussey’s ball he ran down. That was a good route he ran, and we had to make that play.”

In their eighth, the Heels inched closer when Alberto Osuna sent a moonshot of a home run over the left field wall to make it 7-6. The ball had a 45-degree launch angle off the bat and looked like a potential fly out but carried enough to clear the wall.

With nothing doing in the NC A&T ninth, the Aggies were three outs away from the historic win and looked to junior left-hander Peyton Winebarger to slam the door on UNC. Winebarger already had two outs in three pitches into the inning, courtesy of a ground out to third baseman Anthony Hennings and a foul out to Bussey near the bullpen in right field.

Things got interesting when Madej beat out a bunt single with lead-off hitter Vance Honeycutt coming to the plate. But Winebarger (SV, 1) got the best of him with a swinging strikeout to earn the save.

“We’ve got some arms down,” said Hall. “I was worried about our pitching tonight without the availability of some of our better arms. But there was a calmness in the dugout. I thought they played really well. We had some pitchers come in during certain scenarios where they might not have thought they would pitch in a game like this, and they came in and did a great job. They kept us in the ballgame.

NC A&T pitched a different arm every inning, six of which turned in scoreless frames. The Aggies did the majority of their damage offensively in the fourth inning.

Trailing 2-0, Bussey singled up the middle to score Hennings from second before Maynard’s mammoth grand slam that knocked off the clock at the top of the Heels scoreboard in left center field. Bussey had a team-high three hits on the night, while Maynard’s four RBI were also a team-best.