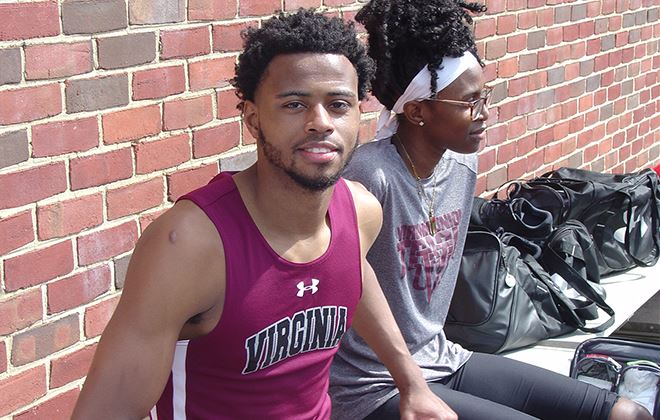 VUU’s basketball star won the triple jump on Friday at the University of Richmond.

Virginia Union University’s Jordan Peebles, fresh off of being named to the HBCU Classic All-Star Game, won the men’s triple jump at the Fred Hardy Invitational, held at the University of Richmond on Friday, March 18.

Peebles, a graduate student from Emporia, Va., already has a Bachelor’s Degree in Math, is due to receive his Master’s Degree in Elementary Education on May 7.

Peebles won the event with a leap of 14.86 meters.  He beat the defending CIAA indoor champion, Emmanuel Oguntoye of Virginia State University, who had a leap of 14.18 meters.

VUU’s Teahrian Tyler placed third with a leap of 13.83 meters.

“Having Jordan on the team is wonderful,” said VUU Interim Track and Field Coach Franck Charles.  “He’s a graduate student, so he helps me out, encouraging the team and helping getting the whole program back up to where it’s supposed to be.”

Nineteen teams from Division I and Division II competed at the Fred Hardy Invitational.

Virginia Union will now compete at the Doc Jopson Invite at Bridgewater College on Saturday, March 26.