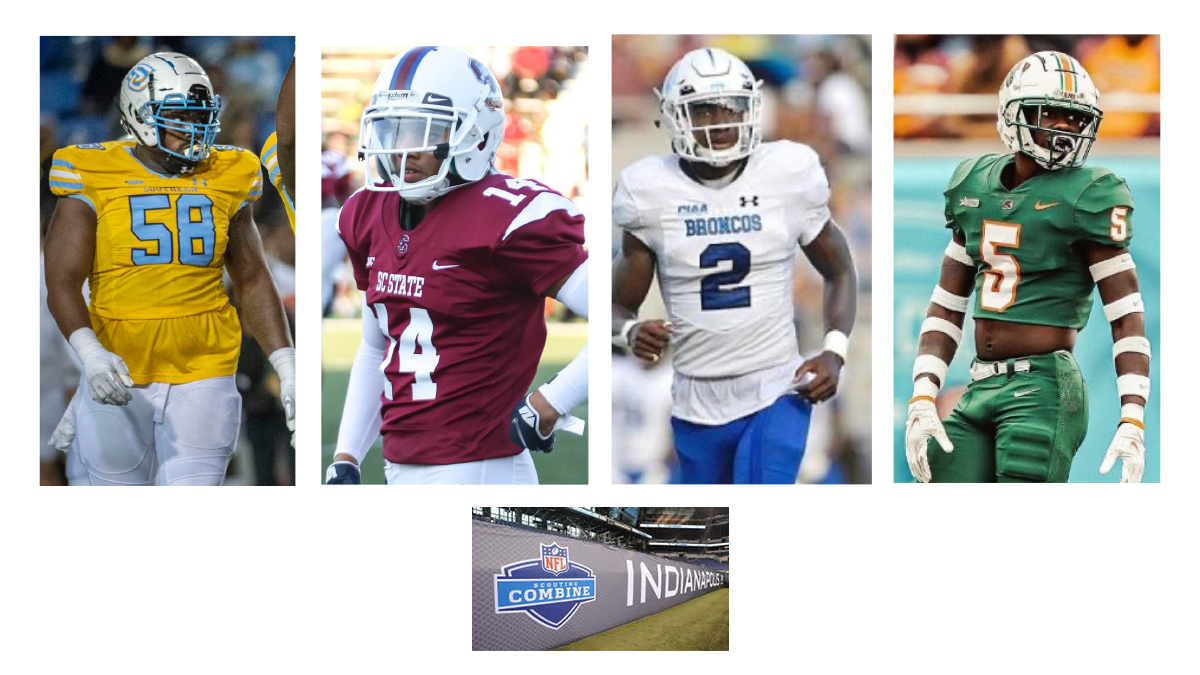 INDIANAPOLIS, IN – Four HBCU prospects will try to impress NFL head coaches, GMs and scouts from all 32 NFL teams this week as the league’s annual NFL Scouting Combine kicks off Tuesday, March 1. The Combine will go through Monday, March 7 at the Lucas Oil Dome, home of the Indianapolis Colts.

They will be looking to earn a spot in the ­­­­2022 NFL Draft to be held on April 28-30 at Allegiant Stadium in Paradise, Nevada. The site is the home of the Las Vegas Raiders. The NFL Network will carry more than 50 hours of the workouts with live coverage beginning on March 1.

The four will also be working to erase the memory of the 2021 NFL Draft when no HBCU players went off the boards.

One thing that jumps out to you when you watch Bell is the pop when the 6-2, 200-pounder hits people. That’s what Bell hopes NFL scouts will remember when he and three other HBCU products are among the 324 players at the Combine

Bell won’t get a chance to deliver some of his patented blows however. There is no 1-on-1 or group competition here. The Combine sends players through seven drills to test their speed, agility, strength and overall quickness and athletic ability. The drills are the 40-yard dash, bench press, vertical jump, broad jump, 3-cone drill, 20-yard shuttle and 60-yard shuttle.

Prospects also have the opportunity to interview with NFL teams.

Bell, a former high jump state champion and high school receiver in his native New Jersey, should excel in the workouts. Originally signed by Maryland, he found a home as a dominating run defender and overall defensive force at the back end of the Rattlers’ defense.

He used his size (6-2, 200 pounds, 33-inch arms) and ranginess to ward off defenders and make plays on the ball all over the field. He will be the first FAMU player drafted since 2013, most draft gurus believe. Bell was named to multiple FCS all-American teams.

Bell is projected to be taken on Day 3 of the draft when rounds 4-7 are chosen. He could move up with a strong Combine performance.

Size and speed are even better

It would be ever more rare for Williams to go off the draft boards.

He was the only NCAA Div. II player to be selected to compete and work out at the prestigious Reese’s Senior Bowl in early February. Additionally, he’s the first FSU player to compete in the game. The Senior Bowl is considered the premier postseason all-star game for draft eligible players. He performed well there. A strong Combine performance will likely cement a spot in this year’s draft.

Draft history indicates that only one player from FSU has ever been drafted, and that was back in 1973. More recently, 5-9, 170-pound WR/KR Chris Hubert out of FSU was signed as a free agent by Arizona after an impressive preseason in 2016 but was eventually released. Former FSU offensive lineman Kion Smith signed a reserved/futures contract with Miami in September 2021.

Like Bell, Williams has a tall, slender frame at 6’ 2.5” and 193 pounds. Like Bell also, he is a former receiver in high school. The tall, slender build appears to intrigue NFL personnel folks most about HBCU players in the defensive secondary. Bryan Mills was a 6-1, 175-pound free agent defensive back out of NC Central who was on the rosters of four NFL teams beginning in 2021. He recently signed to play with the Birmingham Stallions of the USFL.

But Williams also impresses with his speed. He was the fastest player on his team at the Combine. That’s saying a lot. He says he wants to run 4.3 in the 40. If he does that, the size-speed combination will likely get him drafted.

“I believe in my skill set, I believe in my game and I’m going to just keep doing what I do, work hard, play through every rep and lock it down,” Williams told Justin Rogers of the Detroit News.

Tall and slender does not define South Carolina State’s Durant. Solid and cerebral would be more fitting.

The 5-10, 180-pounder was the captain of the Bulldogs’ 2021 MEAC championship run and Celebration Bowl win. Durant also won the MEAC’s defensive player of the year award.. He was the field general and leader of the defensive secondary that complimented SCSU’s fierce front seven. He also follows in a long line of SC State defenders that have found a home and success at the next level.

Durant showed a significant comfort level in handling assignments because of his athletic abilities and football IQ. He displayed a knack for being around the ball and making plays. He picked off 12 passes in his SCSU career.

Durant is not rated far behind Bell and Williams as a defensive backfield prospect.

Carter said on a recent report that he’s up to 6-4, 308 pounds. The former Southern standout has been on the Combine list the longest and was also an early selection to the Senior Bowl.

He is a former high school basketball player in Louisiana that led his team to a state championship. He was also a tight end on the football team. That athleticism has translated to a standout nimbleness as an offensive guard that caught the attention of pro scouts. His profile is similar to Houston 2019 first round pick Tytus Howard out of Alabama State, though Carter is not projected to go anywhere near that high.