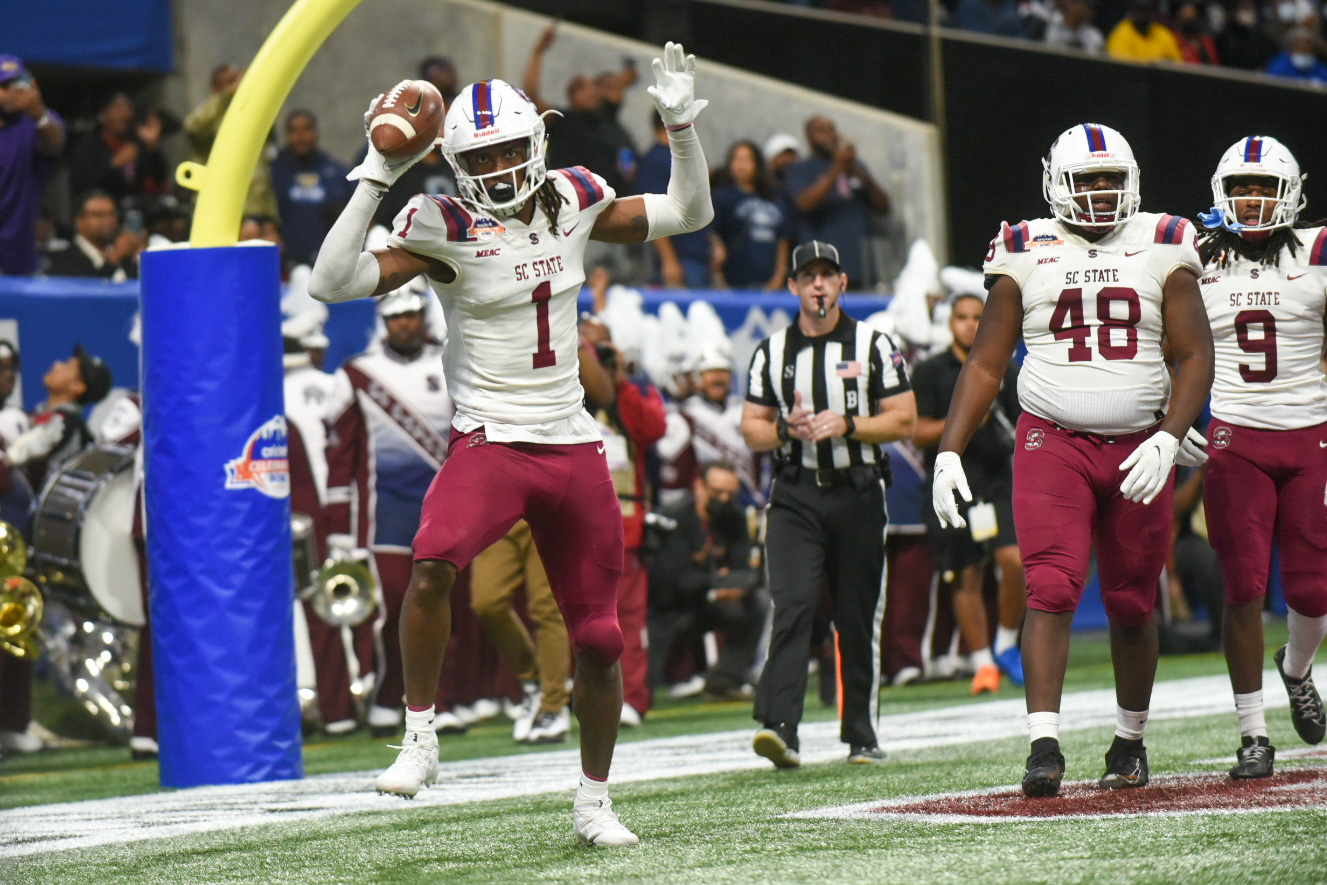 SC State wide receiver Shaquan Davis (#1) does the skip-dance of rival coach Deion Sanders after scoring the first of his three TDs in Saturday’s 31-10 upset win over Sandrers’ Tigers of Jackson State.

Jackson State and head coach Deion ‘Coach Prime’ Sanders shocked the football world this week as the No. 1 high school recruit in the nation (Travis Hunter) chose Jackson State over a handful of Div I suitors.

The Bulldogs, champions of the Mid Eastern Athletic Conference, came in with a 6-5 record and huge underdogs to the 11-1 Southwestern Athletic Conference champion Tigers. But SCSU, after giving up the game’s first score, completely shut down and stifled the vaunted JSU offense to come away with a stunning 31-10 upset win before a Celebration Bowl record crowd of 48,653.

The win, the fifth for the MEAC in the bowl game’s six-year history, was certainly the most unexpected and gave veteran head coach Oliver “Buddy” Pough of South Carolina State his first win in his program’s first trip to the season-ending bowl game.

Jackson State (11-2) had run through the SWAC season unblemished (8-0) in its second year under Sanders, the Pro Football Hall of Famer whose exploits and comments as a coach have captured the nation’s attention. Earlier this week, Sanders was named recipient of the Eddie Robinson Award as the top coach in FCS football, while his son, freshman quarterback Shedeur Sanders, won the Jerry Rice Award as the FCS’s top freshman.

On Saturday, neither Sanders had a good game.

Instead, South Carolina State redshirt sophomore Shaquan Davis, who at 6-5, 215 may be the most talented wideout in the nation, hauled in a Celebration Bowl-record three touchdown passes from QB Corey Fields, Jr. to steal the limelight. Davis finished with five catches for 95 yards and the three scores. Fields struggled early but finished 12 of 31 for 166 yards and four TDs.

But defense won the game for the Bulldogs (7-5). Their front four chased Sanders (16 of 36, 175 yards) all day, sacking him three times, forcing one costly Sanders fumble deep in JSU territory and picked him off twice. They limited the Tigers rushing attack to 19 yards on 29 carries.

On its second possession of the game, JSU scored on a nine-play, 66-yard drive capped by a 5-yard pass from Sanders to Keith Corbin III to lead 7-0 with 7:24 to go in the first quarter. The lead held up threw one quarter. Shockingly, JSU would not reach paydirt again. SC State’s defense took over from there.

After two changes of possessions in the second quarter, SCSU’s Dyson Roberts got off a bowl-game record 74-yard punt into the JSU end zone setting up the Tigers at their own 20. On first down from there, Sanders was corralled by Bulldogs defensive end PatricK Godbolt, fellow lineman Jablonski Green stripped Sanders with linebacker B. J. Davis recovering at the JSU 5. Three plays later, Fields hit Davis on a 6-yard slant to get the Bulldogs on the board. Gavyn Zimmerman’s PAT tied the score at 7 with 2:06 to go in the quarter.

The Bulldog defense next halted a JSU drive deep in SC State territory when freshman linebacker Aaron Smith stopped Sanders on a 4th-and-1 at the SC State 16 after the Tigers eschewed a 33-yard field goal attempt.

After another stop, the Tigers punted to the SCSU 40. Fields drove the Bulldogs 36 yards in nine plays culminating in a 26-yard field goal just :08 seconds before the break. SC State took a 10-7 lead into the half.

SC State got the second half kickoff and ran three plays before Roberts got off a beautiful 66-yard punt down to the JSU 11. On JSU’s third play from there, Sanders threw over the middle into double coverage and was picked off by SC State defensive back Kendall Moultrie. After the pick on second down from the JSU 16, Fields hit Davis on a 16-yard fade pattern in the back of the end zone. Zimmerman added the PAT and the Bulldogs increased the lead\ to 17-7 with 12:36 left in the third quarter.

On second down after the kickoff, Sanders was picked again. This time it was Smith who hauled in the theft, returning it 18 yards to the JSU 17. Following a sack that put the Bulldogs in a 4th-and-19 at the JSU 28, Pough eschewed a field goal and went for it. Fields calmily hit Will Vereen on a 20-yard pass down the right sideline to give the Bulldogs a first-and-10 at the JSU 15. On the next play, Fields found Richard Bailey wide open on a crossing pattern in the left corner of the end zone from 15 yards out. Zimmerman added the PAT and the Bulldogs led 24-7 with 8:43 to play in the third.

The only third-quarter SC State miscue was a fumble by back-up running back Donte Anthony that JSU recovered at the Tigers’ 39-yard line. Sanders drove JSU to the SCSU 18 before settling for a 36-yard Bailey Raeborn field goal with just :15 seconds left in the quarter.

Entering the fourth quarter with a 24-10 lead, the Bulldogs only needed to keep from making a big mistake, run the clock and the win was theirs. They did just that. They continued to stifle the JSU offense and put together a game-clinching nine-play, 93-yard drive that took up over six minutes of the final quarter to seal it. Davis had a big 43-yard reception in the drive and hauled in his third TD from 16 yards out with 6:19 to play that was the clincher.

If there had been a special teams MVP, it would have been Roberts who averaged a whopping 49.2 yards (392 yards) on eight punts, repeatedly punting away from dangerous JSU returners Isaiah Bolden and Warren Newman. Roberts also had a clutch and key open field tackle on Newman when he escaped contain and appeared to have only Roberts between him and the goal line.