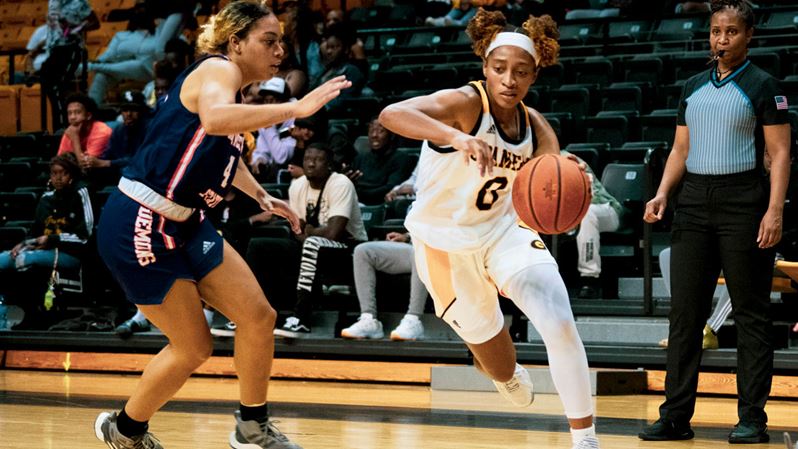 HOW IT HAPPENED
– Holt got Grambling State (2-0) started on the right foot, drilling a 3-pointer for the first bucket of the contest
– After NSU (2-1) tied the game at 5-5 with 7:34 left in the first period, GSU went on 13-6 run to claim an 18-11 lead heading into the second stanza
– Northwestern State opened the second period on an 11-4 run, capped by a mid-range jumper by Candice Parramore.
– However, the Lady Tigers once again seized control, working their way to 34-29 lead at the half.
– Grambling State, which led for the majority of the contest, fell behind for the first time when Josie Fleischmann connected from behind the arc giving NSU a 41-40 lead with 4:01 left in the third.
– Jasmine Forte scored on a layup with 1:24 left to play in the third frame, handing the Lady Tigers a 46-45 lead to begin the fourth quarter.
– Early in the fourth period, both teams traded buckets.
– However, Leah Morrow put Grambling State up for good after driving to bucket, fighting through a foul and sinking a layup.
– Morrow hit the ensuing free throw to give the Lady Tigers a 57-54 advantage with 3:53 left to play.
– GSU outscored the Lady Demons 14-6 down the final stretch, sealing the 68-60 victory

UP NEXT
Grambling State travels to Gainesville, Fla. for a non-conference game versus the Florida at the Exactech Arena at the Stephen C. O’Connell Center on Friday. Tip-off is set for 5 p.m. and will be broadcast on SEC Network +.