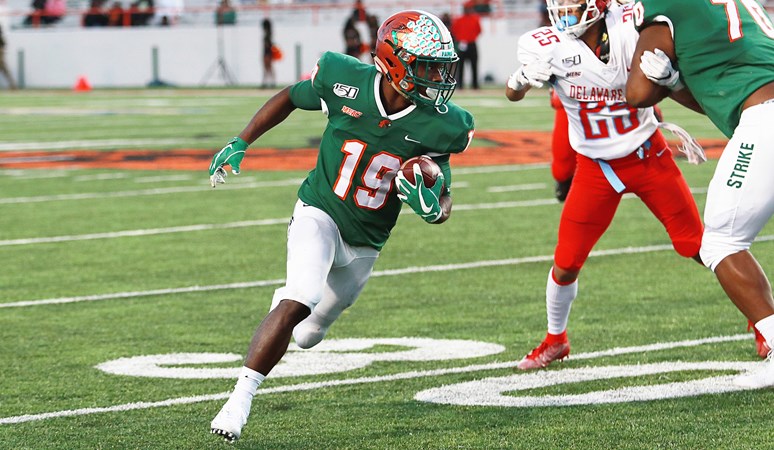 Xavier Smith, Chad Hunter and David Manigo are a dangerous wide receiver trio that FAMU is counting on to help it turn heads in the SWAC.

Tallahassee, Fla. | Hungry. No explanation is needed. That’s how Florida A&M (FAMU) assistant coach Jelani Berassa described his wide receiver corps a few days leading up to the start of fall football camp. FAMU is finally playing again – 652 days will pass between its last game (November 23, 2019) and its upcoming season opener (September 5, 2021) – and the wideouts are hungry to return to the field.

“Will we make the necessary plays to put our team in a position to win? That’s the only goal.”

The fourth-year coach has a full arsenal of talent at his disposal — there are 15 receivers listed on the Rattlers’ online roster — and many have veteran experience. The FAMU faithful will recognize the names Xavier Smith, Chad Hunter, and David Manigo and will be pleasantly surprised with the growth and play of several others.

“My room is so talented,” Berassa said. “I have guys that may not play this year, and it’s not that they aren’t talented enough to make plays; it’s just that the guys in front of them are on a different level. We have a really good situation at receiver.

“The whole world knows about Xavier Smith already. He’s already proven his ability to be a playmaker and change games.”

“David Manigo won’t sneak up on anybody,” Berassa added. “He’ll be expected by most to be a big-time playmaker. He’s had a bunch of success in his time here.”

2019: Finished second on the team with 575 receiving yards on 41 catches … hauled in five touchdowns.

“Some may have forgotten that Chad Hunter has made a lot of plays in his career. The injury bug has bitten him in the last couple of seasons, but Chad is as explosive as ever,” Berassa added. “He’s back healthy and is poised to have a good senior campaign.”

2019: Appeared in eight games to record three catches for 14 yards.

“People also need to look out for Chris Sanders and Jah’marae Sheread. We’ll have a few young guys, freshmen that haven’t played yet, but are pushing to compete for playing time.”