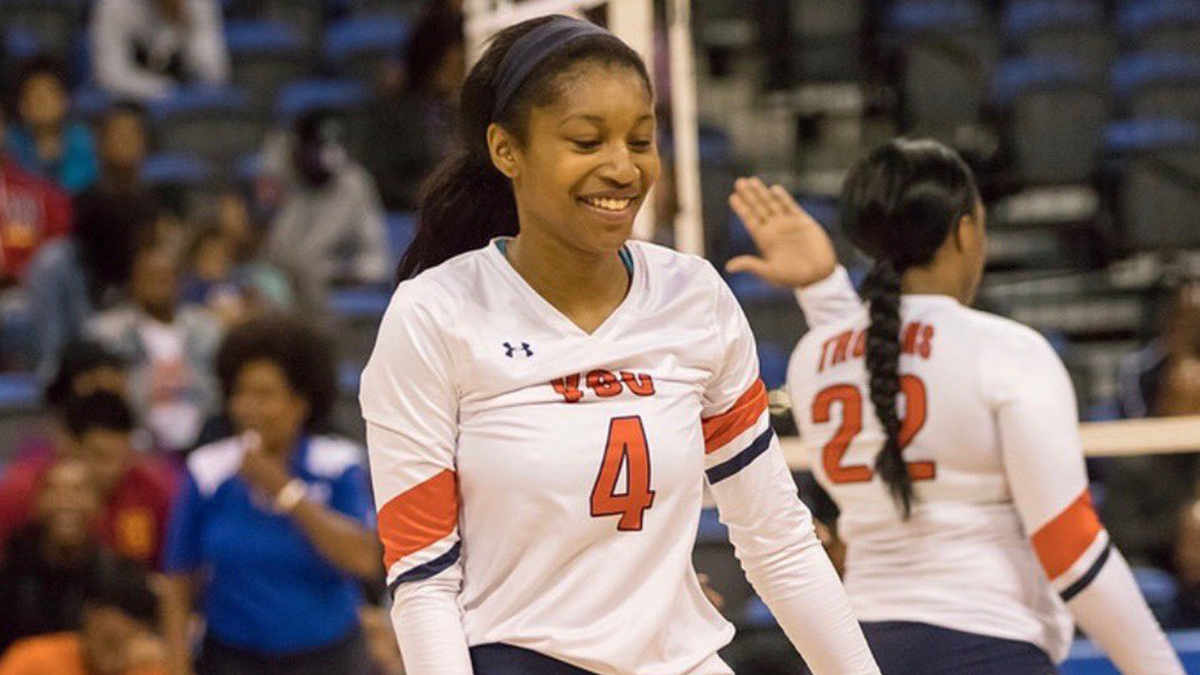 Virginia State University alumna and former volleyball star Bria Anderson has been named the CIAA’s Woman of The Year.

Anderson and Purnell  will both represent the conference as candidates for the 2021 NCAA Woman of the Year Award, which accepts two honorees if at least one of the student-athletes is a woman of color or international student-athlete.

During her four years at VSU, Anderson earned her bachelor’s degree in Health, Physical Education, & Recreation as well as her master’s degree in Sport Management, which she earned in 2021 carrying a 3.94 grade point average. She’s spent time volunteering in her community working on initiatives such as the Aging Strong Program, Healthy Kids Day, and the American Red Cross Blood Drive. Anderson also served as President of the Sport Majors Club at VSU from 2017-2019. Athletically, the Cumberland, VA native was an All-CIAA selection in volleyball as a setter in 2019 while serving as a 3-year captain on the VSU volleyball team. Anderson made the 2020 VaSID Academic All-State team and received the Highest Departmental GPA award from VSU in 2021.

“I feel very honored to have been nominated and chosen for this award. It feels great to know all of my effort is being recognized. I have had many great experiences to get me to this point. I also have a great support system in Cumberland, VA, without them I couldn’t have made it throughout this journey. I’m super grateful for anything and everything that has led me to this point. It feels great to know that my mother’s sacrifices for me have helped shaped me into the woman that I am. I hope to inspire others with my story,” said Anderson. “Additionally, VSU provided me with extensive knowledge and experiences to keep me on the right path in order to receive such awards like this. They have pushed me to expand my mind and excel in numerous ways both academically, and athletically.”

A Williamsport, PA native, Purnell majored in Political Science, making the Dean’s List every semester throughout her scholastic career before graduating Summa Cum Laude with a 3.92 grade point average in May of 2021. She is an active member in her community where she volunteers for organizations such as RISE, helping college students and Pennsylvania residents to vote, as well as serving as a tutor for the LUPA athletic department. A consistent leader among her peers, Purnell served in several officer roles for many organizations to include Attorney General of the Lincoln University Judicial Board, member/chair in the Student Government Association Student Senate, Special Senator of the Pennsylvania Association of State-Related Students, and President of the Thurgood Marshall Law Society to name a few. For her efforts in the community, Purnell received the 2021 Community Service Award from Lincoln University. Purnell is a three-sport athlete (cross country, indoor and outdoor track and field) and earned All-CIAA honors in cross country during the 2018 and 2019 seasons. She is a member of Chi Alpha Sigma National Scholar-Athlete Honor Society as well as Pi Sigma Alpha Political Science Honor Society.

“I am grateful to have been selected as a nominee for the NCAA Woman of the Year. This has been a goal of mine since I first started running at Lincoln University. To be a woman representing women of different identities and backgrounds is critical to the development of our battle to equity and truly being seen,” stated Purnell. “I’ve been nominated for this award given in accordance to different accomplishments and acts of service, and yet for every point I’ve acquired toward this title, I’ve been a WOMAN through it all. I am extremely honored that the CIAA has recognized my hard work on and off the track and has chosen me to be their nominee for the national portion.”

Anderson and Purnell now move on to the next phase as the NCAA Woman of the Year Selection Committee, made up of representatives from the NCAA membership, will choose the Top 30 honorees – 10 from each division – from the conference-level nominees. The Top 30 honorees will be announced in the coming months.

From there, the selection committee will narrow the pool to three finalists from each division. The NCAA Committee on Women’s Athletics will select the 2021 Woman of the Year from the nine finalists. The Top 30 honorees will be celebrated, and the 2021 NCAA Woman of the Year will be named this fall.