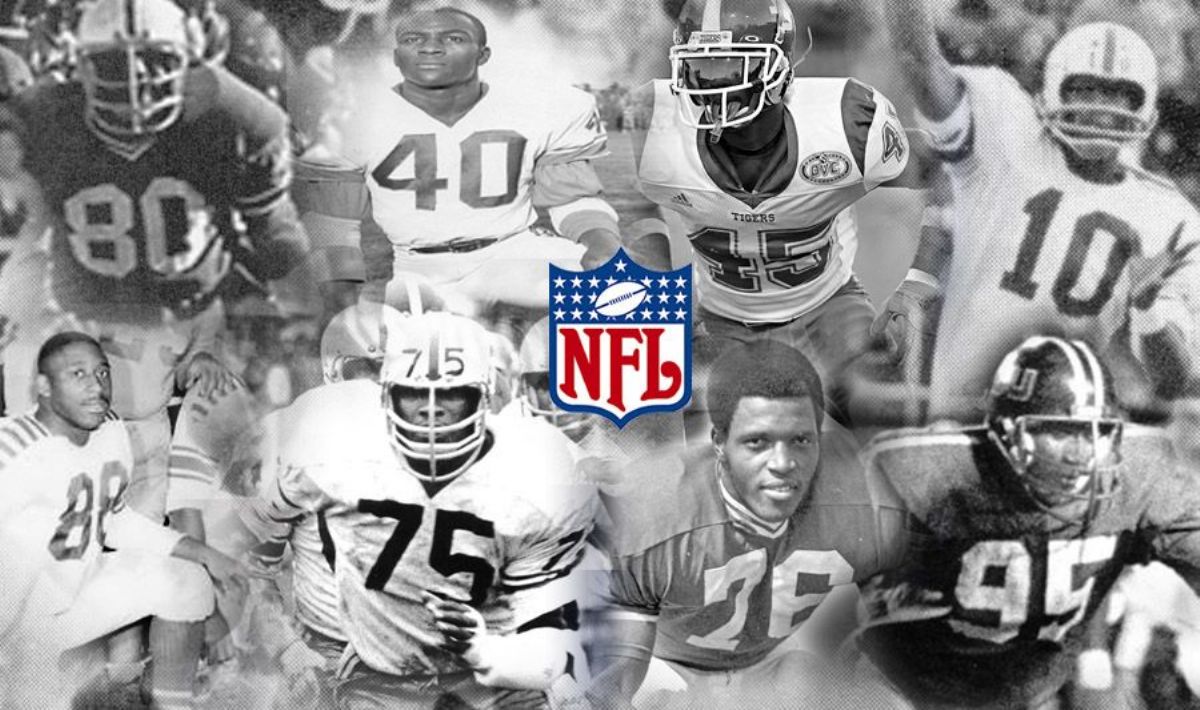 Tennessee State showcases their history in the NFL Draft

An inside look at TSU’s NFL history.

The Tennessee State football program has a proud history dating back to 1912. Included is the number of players who have been selected during the annual National Football League draft. Defensive end Hal Turner was the first Tiger to be picked back in 1952 by the Detroit Lions, while offensive lineman Lachavious Simmons became the 121st member of the Big Blue taken when the Chicago Bears called his name in April.

The 121 draftees is the second most players selected from a Football Championship Subdivision (FCS) all time. The amount is also higher than 36 programs from the Football Bowl Subdivision (FBS) level, including Middle Tennessee.

Since 2000, Tennessee State has had nine players drafted and is matched by Delaware. The two programs are just behind North Dakota State and Montana, who each have 11. TSU, NDSU and Delaware have all had a player go in the first round. In 2008, the Arizona Cardinals chose former Tiger Dominique Rodgers-Cromartie with the 16th overall pick.

The nine picks since 2000 for the Big Blue tops all other Historically Black Colleges and Universities (HBCU’s), all members of the Ohio Valley Conference (OVC) and 22 FBS schools, including MTSU.

Tennessee State also holds the distinction of being the only small school to have two players taken within the first four picks of a draft. In 1974, Ed ‘Too Tall’ Jones was the overall number one pick by the Dallas Cowboys and was followed by college teammate Waymond Bryant, who was taken three picks later by the Chicago Bears. Jones and Bryant were joined by John Holland, Greg Kindle, Carl Wafer and Ed Gatewood as drafted Tigers in ‘74.

Jones played for 15 seasons with the Cowboys, appearing in three Super Bowls, three Pro Bowls and earned a spot on the 1982 NFL All Pro team. Jones finished with 106 career sacks, officially 57.5 in the NFL record books since the category was not recognized until 1982. The defensive end is third all time in Cowboys history in seasons played, being passed by Jason Witten after the 2019 season.

Offensive tackle Jim Caldwell became the second player selected in a draft, just one year after Turner, but TSU had to wait eight more years before tackle George Balthazar was taken in both the NFL and AFL drafts.

Three years later, running back Izzy Lang began a stretch of 16 consecutive drafts a Tiger would enter the NFL. This stretch included current head coach Rod Reed’s father Robert, who was taken in the 1965 draft along with Rosey Davis.

In 1968, Claude Humphrey became the first player from TSU drafted in the first, as the defensive end went third overall to the Atlanta Falcons. With the 25th overall pick, the Oakland Raiders made Eldridge Dickey the first African-American quarterback to be selected in the first round of an NFL draft.

Humphrey went on to have a stellar 13 year career with the Falcons and Philadelphia Eagles. In 1968, Humphrey was named the NFL Associated Press Defensive Rookie of the Year. The former Tiger went on to play in six Pro Bowls, one Super Bowl and was a two-time All-Pro selection. Humphrey was inducted to the Pro Football Hall of Fame in 2014.

In 1969, Jim Marsalis became the third Tiger first rounder. The defensive back was the 23rd overall pick by the Kansas City Chiefs. In his rookie season, Marsalis helped the Chiefs to a 23-7 Super Bowl win over the Minnesota Vikings. The former Tiger was instrumental in the Chiefs two AFC playoff wins with two interceptions against the New York Jets and one against the Raiders.

Holland enjoyed a 10 year career in the NFL, spending nine years with the Bengals. The right tackle started all 42 games through his first three years before an injury limited him to three games in 1974. After returning, Holland started all 74 games for Cincinnati over the next five years.

Woods highlighted his six year career with a Super Bowl championship as part of the 1973 Miami Dolphins.

In all, 21 former Tigers have played in a Super Bowl with one earning the biggest game’s Most Valuable Player award. Richard Dent, an eighth round selection in 1983, led the Chicago Bears to a 46-10 win over the New England Patriots in Super Bowl XX. Dent also claimed bragging rights over former TSU teammate Steve Moore who played right tackle for the Patriots. Moore was the Patriots third round selection in ’83.

Dent was inducted into the Pro Football Hall of Fame in 2011 after spending 15 years in the NFL. Dent was a four-time Pro Bowl selection and won two Super Bowl rings, his second coming with the 1994 San Francisco 49ers. A defensive force, Dent currently ranks 10th all time in the NFL with 137.5 career sacks.

The Tigers have had 11 players play in the NFL for 10-plus years, nine of which were drafted. Jones and Dent lead the way, playing one more season than Anthony Pleasant who was selected in the third round by the Cleveland Browns in 1990. Pleasant went on to win two Super Bowl rings and led the NFL with six forced fumbles in 1995.

Mike Hegmen spent 13 years with the Cowboys after being picked up in the seventh round of the 1975 draft. Rodgers-Cromartie hopes to play in 2020, which would match Hegmen and Humphrey in longevity.

Defensive back Brent Alexander spent 12 seasons in the NFL as an undrafted free agent and is currently ranked 73rd in career solo tackles with 657. Anthony Levine is entering his 11th season in the NFL as a UFA and has claimed Super Bowl rings with the Green Bay Packers and the Baltimore Ravens.

Since 2000, TSU has seen six offensive linemen selected, beginning with Michael Thompson. The tackle was one of two Tigers taken in the fourth round of that year’s draft. Thompson went in the fourth round to Atlanta, 21 picks before the Buffalo Bills selected wide receiver Avion Black.

After DRC in 2008, running back Javarris Williams went to Kansas City in 2009 ahead of a run of linemen from TSU. Kadeem Edwards and Demetrius Rhaney were in the class of 2014, while Robert Myers and Anthony Morris followed in 2015.

Tennessee State showcases their history in the NFL Draft